Sex in the Slow Lane 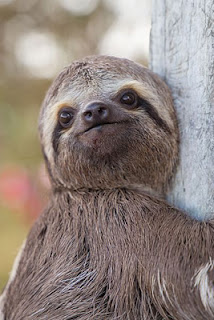 There are many different mating systems in use across the animal kingdom, but the one that is most common among mammals is polygyny. In this system, one male mates with multiple females, typically because he won't let other males anywhere near them. From an evolutionary perspective this makes sense, since a male can sire offspring with multiple partners simultaneously, while females are limited by the size of their litters, and the effort required to look after the resulting young (which is more of a consideration for mammals than it is, for example, for most fish).

In fact, it has been estimated that something like 90% of all mammal species practice polygyny to at least some degree. There are, of course, other options. For example, where it takes a particularly large amount of effort to look after young, it may really help if the male assists in doing that, something that naturally tends to favour monogamy. This is the case among humans, where childcare is both lengthy and arduous, so that two parents are better than one, where this can be managed. However, it has been observed that not all male humans are 100% loyal to their spouses (I hope this isn't too big a shock) so that monogamy isn't the absolute rule that it might be.

The same thing happens with other mammal species. The species as a whole might be polygynous (or whatever), but that doesn't mean that every single individual always follows the usual pattern.

In the case of polygyny, where the male is already mating with as many females as he can manage, this basically means that it's the female who is "cheating" on her partner. And we know from paternity testing that even among species that are supposed to be polygynous, so that the male calls all the shots, that some females are more promiscuous than you might think.

It has to be said that this isn't necessarily down to choice, since sexual harassment isn't something unique to our own species. But where it is a decision by the female, the two most likely explanations are to increase the genetic diversity of her children, and to confuse potentially infanticidal males as to who their real children are. (That is, so that they don't kill your children by another male, because they can't be sure they're not actually their own).

Either way, how well this works depends to a large extent on just how well the dominant male can keep his rivals away. This is why, in most mammal species, the males are, on average, larger than the females; they need that extra bulk to fight one another off. If they're quite good at it, then the species is strongly polygynous, if not, then it's less so, or even outright promiscuous. But this sort of mate guarding doesn't simply rely on physical strength, but on the ability to control the movements of the female; it's no good if she's just going to wander off and you either aren't able or aren't prepared to follow her.

If there's a prime example of mammals that can't be bothered to chase other animals about, or, indeed, move much at all, it's surely the sloths. There are a number of species of sloths, placed into two families, one each for the two-toed and three-toed sorts. They really don't have much in the way of close relatives, although, for what it's worth, the closest living relatives that they do have are the anteaters. And, as their common name suggests, they are indeed very slow moving, and far from energetic. Furthermore, they are solitary animals, spending their time alone, seemingly doing as little as possible apart from eating and sleeping.

This being so, one would expect that males wouldn't be very effective at guarding females, and would have a low number of sexual partners, ending up either monogamous by default or opportunistically promiscuous. But, in fact, a 2012 study of brown-throated sloths (Bradypus variegatus), one of the three-toed species, showed that they seemed to be really quite strongly polygynous. Indeed, paternity testing showed that of the twenty sloths born in the area that year, ten shared a single father, and the others had just four fathers between them. Since sloths don't give birth to twins, and do so only once a year, that's twenty mothers, five fathers, and about fifteen disappointed males - exactly what we'd expect from a polygynous animal.

The authors proposed that, while the males didn't put much energy into guarding the females, the females weren't really going anywhere either, so they didn't really have to. On the other hand, the marginally less slow-moving Hoffmann's two-toed sloth (Choloepus hoffmanni) turned out to be more promiscuous, albeit at fairly leisurely pace.

The fact remains, though, that the number of studies so far conducted on the mating habits of sloths isn't exactly large. So perhaps there's more going on with the brown-throated sloths than we realise. In particular, do females tend to stick with the same male year after year - until some new dominant individual comes along - or do they actually pick their partners, changing their mind as breeding seasons come and go?

To find out, the authors of the 2012 study expanded their work, examining over a hundred sloths living in a mixed woodland-agricultural area of Costa Rica over a five year period. They radio-tagged them to see how they moved about and how often they met one another throughout the year, and conducted paternity tests on the infants.

Of the ten female sloths that had multiple offspring over the study period, three consistently remained with the same partner, leaving seven that switched at least once. In some cases this was because, over the course of a year, they had moved to a different area, but just as often they simply picked a different partner in the same patch of woodland. While, as before, it turned out that one male fathered a high proportion of the children - by six different mothers - he couldn't rely on any of his partners remaining loyal in subsequent years.

Since there's no evidence that male sloths force themselves upon unwilling females, and since they don't take the trouble to actively fight off rivals, this suggests that there is a fair degree of female choice in sloth mating habits. Even when they have multiple potential partners to choose from, they don't always pick the same one. Quite what makes a male sloth attractive to females remains clear from this study, although the researchers did rule out larger size. There wasn't anything obvious about the area that the most popular male lived in, either, so it probably isn't that he just happened to hang out where the best food was. But that leaves plenty of other options; for example, there might be some subtle difference in the way that male sloths smell that we just can't detect.

Whatever she actually finds attractive in her partners, a female sloth's habit of switching mates as the years progress is probably to enable her to ensure maximum genetic diversity among her offspring - male sloths are too lazy to bother with infanticide, so that's not an issue. Some stick with a partner that they like, at least over a four year period (they are said to live for over thirty years, barring accident). But others pick and choose among their male neighbours, and since there's some evidence that they actively try to entice attractive males to mate with them, and aren't simply passive partners, it seems that amongst slow-moving sloths, the males don't dominate quite as much as one might think.

And, being sloths, this clearly isn't something that bothers them.

[Photo by  "Nortondefeis", from Wikimedia Commons.]
JK Revell at 15:45
Share