A History of the Honey Badger 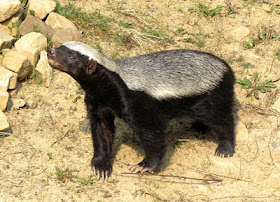 Traditionally the weasel family was divided into three subfamilies: the otters, the skunks, and everything else. Sometimes the badgers were added as a fourth subfamily, but that was about it. As more modern genetic analysis came along, showing us some of the underlying relationships that weren't apparent from anatomy alone, it became clear that things were a good deal more complicated than that, and we now recognise about eight subfamilies of mustelid. (And that's not counting the skunks, which turned out to belong to a different group).

The badgers, in particular, turned out to be more varied in their origins than we had previously thought. Their superficial similarities were due to them all having evolved to be heavily-built digging animals, rather than because they all shared one single ancestor. In particular, two kinds of badger, the American and honey badgers, are now recognised as representing their own distinct subfamilies, with just one living species each, and diverging from the other "weasels" very early on - probably before the "true" badgers of Eurasia had first appeared.

So there is just one living species of honey badger (Mellivora capensis), a widespread and relatively common animal found across most of Africa, the Middle East, and India. But it has to have come from somewhere and, given that it's a solidly-built animal and not especially small, we'd expect there to be some fossil history for us to look into.

And, indeed, there is. Of course, there is something of a problem here, because if it wasn't always obvious that honey badgers weren't just a slightly special kind of badger when we have the living animals to look at it, determining whether a given fossil really belongs to that group rather than one of the others may not be entirely apparent either. Having said that, now that we know what to look for, and given that honey badgers do have some differences from the "real" sort, this problem is far from insurmountable.

An obvious place to start, then, is with fossils of animals that were clearly very similar to the modern honey badger. At least two such fossil species have been identified. Mellivora sivalensis was first described in the 1860s, and lived in what is now Pakistan around the start of the Ice Ages 2 million years or so ago. It hasn't been well-studied, and is only known from one location, but the other close relative was much more widespread. This is Benfield's honey badger (Mellivora benfieldi) with fossils known from Italy, South Africa and possibly also Ethiopia. (The Ethiopian fossil is almost certainly a honey badger, but it's not complete enough for us to know whether it's the same species or an otherwise unknown relative).

This lived during the Late Miocene, around 5 to 6 million years ago, long before the modern species evolved, since the oldest definitive fossil of that dates back to 2.5 million years ago in Morocco. It remains best known from the first location it was discovered, the Langebaanweg fossil site north of Cape Town, South Africa. At the time this was formed it lay on an estuary; the fossils of the honey badgers, along with many other animals, including sabretooth cats, are from river beds close to the head of the estuary, where sedimentary deposits can easily form.

Last year, a review of the species, using eight newly discovered fossils from the site took a look at the animal's form and how it lived. On average, Benfield's honey badger was slightly smaller than the living animal, although there is some variation in both the overall size and the proportions of the teeth. The living species is quite variable, too, and males are larger than females, so both of these may well have been true of its extinct relative.

In many respects, Benfield's honey badger was similar to its modern relative, which could conceivably be its direct descendant (although that would be difficult to tell with any certainty, and other candidates may exist). However, analysis of the shape and size of the bones and muscle attachments in its forelegs suggest that it probably wasn't as good at digging as the modern version - the authors compare it with dwarf mongooses, which can dig, but prefer to use burrows constructed by other animals if at all possible. They probably had a similar diet, however, and if, anything, may have eaten more meat and less roots and bulbs. (And less honey? It's not as if it's a huge part of honey badgers' diets anyway, although they do love the stuff when they can get it).

In addition to the Ice Age honey badger mentioned above, another Pakistani fossil dates from about the same time as Benfield's species. When it was first described in the 19th century, it, too, was assigned to Mellivora, but in the 1930s it was renamed Promellivora punjabensis because it possessed an extra tooth that modern honey badgers have lost. Not everyone since has kept it so separate, but, either way, it is known only from a single piece of jaw, so it is hard to say very much about what it would have been like in life. A similarly fragmentary fossil from Kenya of around the same age has been named Erokomellivora and is another plausible close relative.

However, these are not quite the oldest honey badgers known. Depending on your definition, that honour might belong to Howellictis valentini, a 7 million-year-old fossil from Chad. First described in 2009, this is another comparatively small honey badger, and has rather more differences from the modern sort than Benfield's species does. While most of the known fossils consist of skulls and jaws, there are just enough pieces of the limb bones to confirm that it walked flat-footed as modern badgers do, but that it probably wasn't effective at digging at all. So this confirms both that honey badgers have existed as a distinct group since at least the Late Miocene, and that they only reached their full digging potential and body form towards the very end of that epoch, or the start of the next one.

It's when we go beyond this that things become a bit hazy. The genera Eomellivora and Ekorus are commonly cited as possible early honey badgers. Both are notable for being much larger than the living species and have been nicknamed "giant honey badgers" as a consequence. Eomellivora was widespread, with species found in Africa, Eurasia, and even North America and dating back perhaps 10 million years. A somewhat smaller 12 million-year-old fossil from Kenya is seemingly related, although it's not clear how closely; if it really is a honey badger, it's the oldest one known, confirming our suspicion that they first evolved in Africa.

Ekorus, also from Kenya, is the largest of these giant forms, standing as much as 60 cm (2 feet) tall at the shoulder - rather a lot for a badger. That's partly because it had long legs, something for which living badgers aren't known. Most likely, this enabled it to chase after its prey, perhaps in a similar manner to a hyena. The teeth are different, too. Not only were those extra teeth that the modern honey badgers have lost still present, but the teeth were a slightly different shape, too, probably because it hunted different (and larger) prey.

It's these differences that make it harder to say that these animals truly were honey badgers, in the sense of being more closely related to the living species than to, say, wolverines. The same review that looked at Benfield's honey badger also examined some of these fossils, and concluded that Eomellivora and Ekorus are close relatives, forming a distinct branch within the mustelid family tree, and one that's more closely related to living honey badgers than to anything else.

Albeit, long-legged, fast-running honey badgers the size of a German shepherd...