All the World's Deer: Endangered and Beyond

A significant number of deer species are endangered. As primarily forest-dwelling animals they are particularly vulnerable to habitat loss, especially in those parts of the world with high human population density and intensive agriculture. Indeed, of the species of deer formally listed as endangered by the IUCN, all but one live in southern and eastern Asia.

Among these is Eld's deer (Panolia eldii), first described by Percy Eld, a British officer working for the Commissioner of Assam, and then more formally written up by army doctor John McClelland in 1842. There is some dispute about the correct scientific name of the animal, due to a number of conflicting studies about where exactly it fits in the deer family tree. It was originally placed in the genus Cervus, along with red deer, but that didn't mean much at the time, since it was 17 years before the theory of natural selection, let alone modern phylogeny.

Nonetheless, it stayed there though most of the 20th century, before being shifted to Rucervus in 2005 alongside some other south Asian deer of similar habits, and that's the name still commonly seen in reference and scientific sources. More recently, genetic analysis has just confused the issue; it's certainly not closely related to the other Rucervus deer, but whether it should be put back in Cervus again, or gets a genus to itself depends on which study you're looking at. Most of the ones I happen to have seen make the latter seem more reasonable, but there's no particular reason to suppose that this is the correct choice. But I have to pick something to name it...

Once found across much of Southeast Asia, Eld's deer has now entirely vanished from mainland China, and probably from Vietnam as well. The main populations (such as they are) survive in Myanmar and Cambodia, with a few scattered herds in Laos. Just a single population remains in India, and there's another living semi-wild in a fenced nature reserve on Hainan Island, China.

These are divided among three, perhaps, four subspecies, with the Indian subspecies in a particularly perilous position. This was thought to be entirely extinct by the 1950s, before being discovered again. In 1975 it was estimated that just 14 of the deer remained alive, but the latest survey, in 2016, estimated that the population had grown to around 260. These are found only on the southern shores of Loktak Lake in Manipur, where a national park provides some protection. Unsurprisingly, they're notably inbred.

Elsewhere, the populations are higher, but still only in the low thousands. Worse, they seem to be declining, having dropped by about 90% over the last three decades in Myanmar. That's since levelled off, or even reversed, and imminent extinction is no longer thought likely... but it's not impossible, either.

Physically, Eld's deer is medium-sized, slightly larger than a fallow deer, but notably smaller than a red deer or elk. Its most distinctive feature is the shape of the antlers, which have an unusually large, forward-sweeping brow tine, leading to the alternative name of "brow-antlered deer". The beam then grows more or less straight back before suddenly curving upwards after a short back tine branches off, and then branching again near the tip, giving four tines in total. (Evolutionarily speaking, this sudden curve seems to have arisen because the vertical part was originally a forward-pointing trez tine, with the small backwards-pointing spike being the original tip of the antler).

Eld's deer primarily eats grass, although it isn't restricted to doing so, and as such, tends to prefer living in relatively open woodland. The population in India is found in fairly marshy terrain, and that subspecies can be distinguished from the others by wider, splayed, hooves that help with stability on soft, shifting, ground. Given the chance, herds can reach several dozen members during the rut, but they are much smaller at other times of the year. In India, they have been reported to use nests of bedded grass made by wild boar to do their sleeping and shelter their fawns, rather than go to the trouble of making their own.

Eld's deer are not the most endangered species of deer in the world. Which that might be depends on your definition of 'endangered', but if we count only the wild population of the animal, rather than those that might be found in captivity, the answer is clear: it's Père David's deer (Elaphurus davidianus). This has a total population in the wild of... zero. By some estimates, that's been the case for around 1600 years.

The deer are named for Fr. Armand David, a French missionary who "discovered" the animals (if that's the right word) in the Imperial Hunting Park near Beijing in 1864. Although they had once been widespread across southern China, by the 19th century, hunting and the advance of agriculture had all but wiped them out. Seemingly, by this point, only the semi-domesticated ones in the park remained, likely because that had been sealed from the outside world since the time of the Yuan Dynasty in the 13th century.

A flood in 1895 destroyed a section of the surrounding wall, allowing most of the deer to escape, where they were subsequently hunted and killed by the local peasants. Around 20 or 30 remained behind, but they were all shot and eaten by German soldiers during the Boxer Rebellion of 1900. The only reason that the species isn't entirely extinct is that, by then, a few had been given as gifts to European nobles, and survived in captivity in Europe.

A few years after 1900, the Duke of Bedford gathered together every known surviving animal from zoos across Europe and brought them to his private estate at Woburn Abbey. By this point, the total population numbered just 18, three of which were no longer able to breed.

Fortunately, it turned out that, if there was one thing several centuries of living solely on protected hunting reserves had done for the species, it was that they were good at breeding in captivity. The number of animals has increased since, and they were successfully reintroduced to China in 1985. In a re-run of events a hundred years previously, a flood enabled some of those to escape in 1998, and a small number of the escapees were still alive as of 2012; they're not truly considered "wild", and it's not clear how viable the populations are, but it's as close to it as we can currently get.

Because of the successful captive breeding, the worldwide population of the deer is now in the low thousands - which is more than can be said for some genuinely wild species that aren't found in zoos. It's true that the remaining animals are highly inbred, but this seems to have less effect on them than one might expect and efforts are underway to artificially breed animals from different populations with one another, to minimise issues going forward. 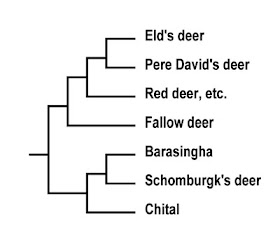 When they lived in the wild, Père David's deer inhabited marshy terrain and, like the Indian subspecies of Eld's deer, they have wide, splayed hooves to help them walk on waterlogged ground and soft mud. Their diet is similarly grass-heavy, and a number of genetic studies (although not all) show that they may well be the closest living relative of Eld's deer. They are more sociable than that is, with mixed-sex herds year-round - although it's hard to know if that might be a consequence of their long existence in captivity.

As I noted in a post back in 2011, however, centuries of semi-domestication have not blunted their natural fear of tigers, despite them not having to face such a creature for all of that time; they remain, however, unafraid of dogs, which would seem similarly aggressive, but were not a natural predator of their ancestors.

Physically, Père David's deer do look somewhat similar to Eld's deer, with much the same size and colour, and manes on the stags. Their antlers are also odd, in comparison to those of other deer (their full Chinese name translates as something like "deer-but-not-a-deer") but in a different way to Eld's deer. In their case, the brow tine rises almost straight up and is not only large, but branches at the tip. Together with what's an Eld-like "back tine" on the main beam, this gives them at least four tines in total, but the appearance is that they have two branching beams, splitting near the base, rather than a single beam with tines running off it as most other Old World deer have.

Another oddity of the species is their unusually long gestation period, which is around 280 days. In most other deer, it's somewhere between 200 and 250 days, even for species such as red deer, which are quite a lot larger. The reasons for this remain unclear, as newborn fawns are no larger than we'd normally expect, and they don't seem to be delaying things to give birth at a particular time of year.

Père David's deer is one of the success stories of conservation; bringing a species back from the very verge of extinction, even if, so far, they have not truly been restored to the wild. Sadly, there's another species of deer that was not so lucky.

Schomburgk's deer (Rucervus schomburgki) was native to Thailand, and seems to have been reasonably common there in the 19th century, albeit not widespread geographically. Named for the British Consul in Bangkok at the time it was formally described in 1863, it inhabited marshy plains and avoided the sort of woodland that many other deer favour. Unfortunately for it, towards the end of that century, there was a large-scale expansion of agriculture in central Thailand as it became economically viable to grow rice for export as well as for local consumption. And marshy plains are exactly the sorts of land that are ideal for turning into rice paddies, leaving the animal nowhere to go.

The fact that it was found in comparatively open country likely also made it easy to hunt, both for meat and for the use of its antlers in Chinese medicine. The antlers were apparently impressive in fully-grown stags, with multiple tines stretching upwards like a candelabrum, but few have been preserved. In other respects, it wasn't especially distinctive, and no particular effort seems to have been made to save it. A few did remain in zoos after it apparently vanished in the wild, but the last of those died in 1938.

As is often the case where animals go extinct, reports of its continued existence persisted for decades after it likely died out. As late as 1953 it was being reported that it "still lives in Siam" although, in all likelihood, it had hadn't done so for nearly twenty years. More recently, in 1991, a pair of the distinctive antlers turned up in a shop in Laos. There is, however, no good evidence that these weren't a decades-old trophy, especially since, so far as anyone can tell, the deer never lived in Laos, and the owner of the shop had apparently obtained his wares from across Southeast Asia over the course of many years. With its preference for open terrain and dislike of forests, it's hard to imagine that any surviving population could have hidden for so long.

So, yes, it's extinct, and has been for over 80 years. It's the only deer species that has gone extinct in recent times, but some of its surviving relatives are also close to the brink, including at least one with a total population lower than that of Père David's deer, and not so well-preserved in captivity. It is to that, and to the remaining species of medium to large south Asian deer, that I will turn next time...

[Photos by "วิชิต กองคำ" and Tim Felce from Wikimedia Commons, and Lothar Schlawe, in the public domain. Cladogram adapted from Heckeberg et al. 2016.]