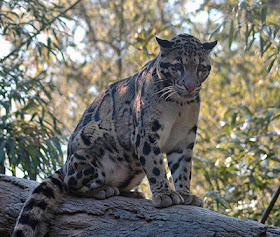 So, if we're going to define "big cat" scientifically as "a member of the pantherine lineage", then we can't count cheetahs and cougars amongst them. Even so, that leaves us with four living species in addition to the lions, tigers, and leopards. The most obvious of these are the jaguar and the snow leopard, which may be trickier to film, but are nonetheless at least reasonably familiar from our TV screens.

The other two are the clouded leopards, which were only discovered to be distinct from one another in 2006. It's probably fair to say that these, not the snow leopards, are actually the most obscure and little studied of the big cats. The more widespread of the two species (Neofelis nebulosa) lives in dense jungles across Southeast Asia (the other, the Sunda clouded leopard, lives in Borneo and Sumatra), a habitat that, combined with its nocturnal habits, does make it difficult to observe in the wild.

Like lions and leopards, clouded leopards are considered a "vulnerable" or "threatened" species, but don't quite meet the international standards necessary to be considered "endangered". This, of course, assumes that our estimates of their population numbers and rate of decline are accurate, and, in any event, a threatened species is still one we want to be protect. Certainly, nobody doubts that their population is declining; even without hard census numbers there's plenty of evidence for it, and, given the loss of forested habitat in that part of the world, it would be surprising were it not the case.

But it would be helpful to get a more accurate picture of how common these elusive cats are, and how many a given patch of forest can support. So, given that they only seem to come out at night, live in the jungle, and, moreover, that they'll hide in the undergrowth if anyone approaches to try and count them, how do we actually do that?

A common method of counting animals without having to observe them directly is to find their droppings. In the hot, damp, and overgrown environment of a jungle, however, even this is not necessarily ideal. Instead, over the last decade or so, our knowledge of clouded leopard populations has come primarily from an increasing use of camera traps.

Essentially, you find trails through the forest that your animals are likely to be using, and hide cameras nearby that will be triggered by IR motion sensors or the like. Leave them there for, say, a couple of weeks, and you should have a collection of photos of whatever passing creatures happened to trigger your sensors. The technique has been used since the 19th century (when the trigger was a trip wire), but has become particularly popular since the 1990s, due to improvements in technology, driven in large part by a growing commercial market among hunters who want to know where their prey are most common. Extended battery life and high capacity digital storage are just two examples of why this sort of thing is getting easier.

While, of course, such traps are used for studying many more creatures than clouded leopards, a recent example that does come from the Lushai Hills of northeast India. This is a rugged heavily forested area, kept as a tiger reserve, and relatively untouched by human activity, compared with the dense agricultural and plantation land around it. Of course, this is not to say that it is any way uninhabited, and, while the difficult terrain certainly limits what can be done with it, historically, it has been the site of shifting slash-and-burn agriculture that has, unsurprisingly, affected the local wildlife.

At 79 sites scattered across the hills, researchers kept the cameras clicking for over 2 months in 2014. In this time, they captured 84 pictures of clouded leopards going about their nightly business. Rather than having spots, as their name suggests, clouded leopards have cloud-like patterns on their fur. These are distinctive enough to identify particular individuals, and the researchers were able to determine that they had photographs of ten different animals. Presumably, at least some living in the area didn't happen to walk in front of the cameras, but, using some statistical methods, the researchers calculate a population density of about five clouded leopards per 100 square kilometres (39 square miles).

This is somewhat higher than we would expect from earlier studies, and may indicate that the local tiger reserve is a particularly good habitat for clouded leopards. The fact that the tiger reserve is protected from local hunters may be one reason for this, but another might be that the reserve doesn't actually appear to have any tigers or leopards in it - certainly none were caught by the cameras. This is bad news for the tigers - since the downgrading of snow leopards a few months ago, the only remaining species of big cat that is formally listed as an endangered species - since, clearly, they were there at one time. But clouded leopards are the smallest of all the "big" cats, and the presence of regular leopards, let alone tigers, competing for the same hunting grounds might well act as a deterrent to them.

The clouded leopards that is, may be moving in to take advantage of a recently available opening for large predators.

But, if tigers and leopards were absent, some other kinds of wild cat did show up in the pictures. Most interesting were some marbled cats (Pardofelis marmorata), with ten different individuals seen in a total of 22 photographs. That's because we know even less about marbled cats than we do about clouded leopards. Once thought to be closely related, because they have a similar coat pattern, we now know that these are true felines. Living in the same habitat as clouded leopards, but only around the size of a typical house cat, these are even harder to find, something that may be further exacerbated by the fact that they seem to spend rather a lot of time up trees, where even camera traps won't find them.

Like the clouded leopards, the marbled cats were more common deeper inside the forest, away from the boundaries of the reserve, where protection by the rangers is presumably less effective, and where they are, in any event, less likely to be disturbed by humans. Limited previous studies of the animals in Thailand have suggested that they are primarily nocturnal, but the time of day of these new photographs would suggest that they are active mostly during the hours of daylight. It may be that this latter pattern is actually the more common, and one possible reason for that is that they eat much the same prey as another true feline in the same area, the leopard cat (Prionailurus bengalensis). That is, like many cats, nocturnal, so the two species may manage to live side by side by having one hunt during the day, and the other at night.

The marbled cat is not considered a threatened species, but, in all honesty, there is so little information on its numbers that it's hard to know for sure. If it's as common elsewhere in the world as it apparently is in northeast India, then it's probably holding on, if not entirely free of risk. But it may well not be, and its studies like this one that will help to answer those sorts of question.