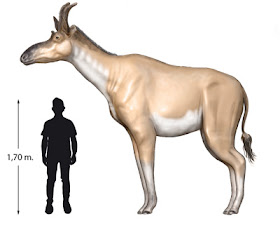 The giraffe family is a classic example of a mammal 'family' that consists of very few living species. Giraffes are sufficiently distinctive, and, arguably, odd, that they clearly deserve a family of their own, yet there just aren't very many of them. Exactly how many living species there are in the family is currently the subject of a dispute, since there is good reason to suppose that the animal we actually know as "a giraffe" represents multiple species, but many researchers feel that the hard evidence for that supposition is lacking. What we can say is that, apart from the giraffes proper, there is only one other living species in the family - the okapi.

Fortunately, being large creatures, prehistoric giraffes tended to leave reasonably decent skeletons behind. They're distinctive in more ways than you might think, too, having, for example, a particularly odd canine tooth that ends in two or three (admittedly small) points, rather than just the one. So our knowledge of fossil giraffes is fairly good, and it turns out that there were a lot more species of them in the past than there are today - they were once a larger, and more widespread group.

When it comes to giraffe evolution, the one thing that surely everyone is familiar with is the story of how it got its long neck. It's here that we see the difference between the modern, Darwinian approach, that says that random mutation gave some giraffes longer necks, which gave them an advantage, and the older, Lamarckian idea that giraffes kept stretching their necks to get at higher leaves, and eventually passed this on to their offspring. There is, as it happens, rather more debate about why giraffes should want a long neck than you might think, but that's a topic for another time.

We can, perhaps, question whether a short-necked member of the giraffe family is, strictly speaking, a "giraffe" at all. The correct term would be "giraffid", a term that encompasses okapis, along with a couple of dozen or so extinct species, besides the animals that are quite clearly "giraffes". But I'll stick with the more familiar term.

Using that definition, then, the time that there seem to have been the greatest number of giraffe species is the Late Miocene, indicating that the group must have undergone a rapid expansion not too long after it first appeared, in the Early Miocene. Late Miocene fossil giraffes come not only from Africa, but also Eurasia. For example, two species of fossil short-necked giraffe are known from a major site in Spain, close to Madrid.

It used to be thought that these two species, Decennatherium pachecoi and Birgerbohlinia schaubi, although they did not live together at exactly the same time, were nonetheless at least reasonably close relatives of one another. A more recent analysis, however, showed that they might not be. According to this, based on detailed features of the fossils, Decennatherium is related to the samotheres, moderate-necked okapi-like fossils from Greece. The other species, however, which lived a few million years later, was instead related to the sivatheres, a group with shorter, more muscular necks, and large antler-like growths on its head. With limited fossil material from either species, however, it was difficult to know for sure.

Now, however, the same researchers have obtained some new Spanish fossils that are much more complete, and can provide a better view of how these animals related to other forms. One of these new fossils is remarkably complete, one of those rare instances where pretty much the entire skeleton has been preserved, with most of the bits joined together where they would have been in life. This allows us to tell a lot more about the animal than we could have known from any of the previous remains.

There are more than enough similarities in the fossil to tell that this is an example of the older form, Decennatherium, although, at around 9 million years old, it would have lived slightly later. On the other hand, there are some subtle differences in the teeth and foot-bones that indicate it is a new species of that genus (much as lions and tigers are different species in the same genus), and, given its exceptional preservation, the researchers have named it Decennatherium rex, describing it as the "king of the Iberian giraffids". 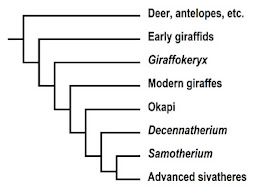 Discounting a number of other fossil species for clarity, the general pattern that they found fore the relationships within the giraffe family is as shown to the right. What's immediately noticeable is that Decennatherium now shows up at the base of the broader sivathere group, having arisen before the more obviously Sivatherium-like animals, which include Birgerbohlinia, diverged from their longer-necked samothere kin. This is because it shows a clear mix of features, such as a moderately slim body and neck (samothere-like) with heavy lower limbs (sivathere-like), and horn-like projections on the head that more closely resemble those of the advanced sivatheres, despite being more "primtive" and simple in structure.

The implication then, is that the ancestor of the muscular sivatheres was itself a fairly slender, moderately long-necked form not unlike the ancestor of living giraffes, but, at some point in the Late Miocene, they reverted to a shorter, more heavily built form. Placing this Spanish animal as an early offshoot of the wider sivathere group has other implications too, since sivatheres are mostly found in Africa - they might not necessarily have started off in Spain and headed south, but there must have been some sort of crossing of the (presumably) western Mediterranean going on around the middle of the Miocene.

Decennatherium, like Sivatherium, had four horn-like protrusions - technically called "ossicones" - on its head. This is different from both living giraffes and from okapis, both of which have only a single pair of ossicones. In fact, in okapis, which are thought to be more closely related to sivatheres, only the males have ossicones, and even in living giraffes, the ossicones are smaller and more slender in the females. We're not really clear how true this was for sivatheres themselves, since it is difficult to sex and animal from a skeleton alone, and often we only have the skull.

Even so, it is thought that the pattern may well have persisted among them, and, in this light, it is interesting that, by looking at a number of other skulls found alongside the more complete skeleton, the researchers identified six individuals, three of which had much longer ossicones than the others. Indeed, in the latter individuals, the forward pair of ossicones were little more than bumps, perhaps barely visible in life. Since the individuals appear to otherwise be about the same age, it is tempting to think that those with the smaller projections were females. At any rate, unless all of the individuals happened to be male for some reason (which is possible, but unlikely), this indicates that Decennatherium females, unlike female okapis, had ossicones, just as female giraffes do. Which may suggest that this was the original pattern in the family, with female okapis having lost their original head ornaments.

Decennatherium rex would have weighed about as much as living giraffe, which is pretty impressive, considering that it didn't have the long neck or legs. It certainly seems to have weighed much more than an okapi, and at 2.8 metres (9 feet) to the top of its head, would have been noticeably larger, too. The advanced sivatheres, it should be noted, were heavier still, again hinting at this animal being an intermediate step in their evolution from still earlier giraffe-like animals. The authors also note some features of the jaw that suggested it might have eaten more tough food, such as grass, than we would expect of a giraffe, which typically browses higher-growing leaves; this, however, is a good deal more speculative, and there's no suggestion that it was purely a grazer.

As neither an advanced sivathere nor a samothere, but something related to the ancestor of both groups, this remarkable fossil gives us more of an idea of how a group of animals known today for their tall and slender builds evolved into a long-gone group of powerful, muscular animals with truly impressive head ornaments.