At the dawn of the Miocene, Europe was still relatively isolated from much of the rest of the world. The only other continent to which is was attached by land was Asia, and even with that, perhaps due to the higher sea levels and narrower land bridges of the day, there was less exchange of animals than one might expect. As a result, for a few million years at the dawn of the epoch, Europe remained a haven for animals that had died out elsewhere, or at least retreated. Tapirs, for example, were still common; today they are restricted to South East Asia and the Americas. The European rhinos of the day were also relatively small and primitive.

While the millions of years that they survived might actually have been quite notable, had we been talking about the much shorter, later epochs, in the grand sweep of the Miocene, we can say that they were quite rapidly replaced by immigrants from the east. The early tapirs were gone (although more modern forms did return for a while, much later), but the rhinos were instead replaced by larger and more sturdy, distinctly Miocene species.

What is a Subspecies?

I've often mentioned in past posts the difficulty of defining what a "species" is. This, despite the fact that, of all the taxonomic ranks, it's supposed to be the one that comes closest to actually having an existence in the real world. Although there are strict rules about how we name, for example, "families", quite where we draw the lines to separate those families from one another is arbitrary. We could place raccoons in the weasel family, or we could place American badgers outside that family, but, purely for the sake of convenience, we choose to do neither of those things. (For what it's worth, though, the rules would prevent us from doing both).

But a species is meant to be an actual thing, right? Certainly, when the word was coined by Linnaeus (in the biological sense; it has older meanings, too) in the 18th century, that was his intent. A hundred years later, Darwin elaborated on the term, realising, as earlier evolutionary theorists had, but Linnaeus hadn't, that species do slowly change into new forms over time. Today, the most common understanding, outside of scientific circles, is that two animals belong to different species if they can't interbreed to produce fertile offspring.

At the highest level, all mammals alive today can be placed into one of three broad taxonomic groups. Around 94% of the known species are placental mammals, a vast group that includes everything from bats to dolphins and from anteaters to humans. Virtually all the others are marsupials, with the strange egg-laying monotremes representing just a handful of species.

But there were once others, many of them existing before placentals and marsupials (and presumably monotremes, although we don't have much in the way of fossils for them) came into existence. Technically speaking, this includes a few side-branches from the two man lines that arose before the last common ancestor of the living forms - for example, creatures close to the line that eventually gave rise to the placentals, but that arose early enough that we can't be sure that they literally had a placenta. But even once we trim out those, there are still quite a few left.

The majority of 'true' seal species live in the Northern Hemisphere, with just five found south of the equator. While they were once more widespread, today, all five of these live in the extreme south, with the most widespread - the southern elephant seal - reaching Tasmania, southern New Zealand, and Patagonia. The remaining four, which are all relatively closely related to one another, do not range so far north and are exclusively Antarctic and sub-Antarctic.

The Weddell seal (Leptonychotes weddellii) is a typical example. With fully-gorwn males up to 3 metres (10 feet) in length, and weighing about half a ton, they are noticeably smaller than elephant seals, but still pretty large by the standards of seals in the north. They were first discovered during the expeditions of navigator James Weddell, who, in the 1820s, sailed further south than anyone had previously travelled, into the sea that now also bears his name. Since the seals are named for him, rather than for the body of water where they were first found, it's perhaps unsurprising that they are not unique to that sea, and are equally common right round the frozen continent. During the winter, they can travel as far north as South Georgia and other islands of the extreme South Atlantic, but they don't normally reach (for example) the Cape Horn at the southern tip of South America.

When the Hippos Changed 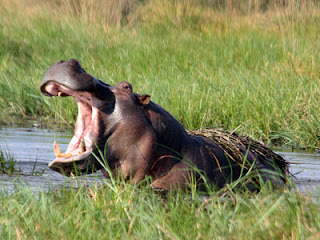 The hippopotamus family contains just two living species, including, of course, the well-known common hippo (Hippopotamus amphibius). As is so often the case, though, the family has a long fossil history including a number of other species and genera, although, while the fossil species were more widespread than the living forms are today, it's fair to say that it was never a huge or diverse group in the way that, say, antelopes are.

Among the fossil species, several are very closely related to the living common hippo, including both the stalk-eyed hippo (H. gorgops), which probably weighed over 3 tonnes, and the pig-sized Maltese hippo (H. melitensis). Quite where the living pygmy hippo (Choeropsis liberiensis) fits in the fossil family tree is much less clear, but there are a number of species that aren't particularly close to either of the surviving forms.

Taking a broad view of the fossil history of the family, then, palaeontologists have tended to group the hippos into two subfamilies. One are the "hippopotamines", a group of broadly "modern" hippos that includes both of the living species. At least two other genera are also considered to belong to this group, one of which, Hexaprotodon, lived everywhere from Madagascar to Spain and Indonesia, taking in much of northern Africa and southern Asia on the way. Most of these lived during the Pleistocene and Pliocene epochs, which is to say, the Ice Ages and the epoch immediately preceding them. The earliest forms, including the other genus, Archaeopotamus of Kenya and Arabia, lived during the late Miocene, first appearing somewhere around 8 million years ago.