I don't normally cover stories if they've had extensive coverage in mainstream media. I prefer to cover the interesting peculiarities that those outside the field are unlikely to hear about. But there's been a story recently that I'm going to make an exception for. Because, basically, I feel like it.

Last month, you may have seen a story about the origin of the placental mammals having been identified. Here, for example, is the BBC coverage. The study being discussed here, by Maureen O'Leary and co-workers, pinpointed the origin of modern placentals as around 65 million years ago. You might also recall a post I wrote in 2011, talking about the discovery of the oldest known fossil belonging to this group. That was 160 million years old.

What, you might wonder, the heck is going on?

First, take every living animal that fits into the group you want to look at. In this case, that's "placental mammals", but it doesn't have to be - it could be anything. So long as it's a real group you will, in theory, be able to trace all of those animals back to a single common ancestor. Everything descended from that last common ancestor falls into the crown group. By definition, that's going to include every living member of the group, because that's where you started, but you're going to get a whole bunch of extinct animals as well.

But you're not necessarily going to get everything. Depending on how you've defined your group in the first place, there may be examples of it that fall outside the crown group. After all, that last common ancestor wasn't alone on the Earth. It probably had close relatives, which, by the luck of the draw, didn't have any descendants that are alive today. It also had ancestors, and some of them might also fit whatever general description you started with.

Birds are a good example here. Besides having feathers and wings, all living birds have a number of features in common. They have beaks, for example, and no teeth. They also have a very short bony tail, to which the tail feathers are attached in a broad fan. If we could trace the origin of the crown group of birds, we'd expect to find an animal that fit that description. But Archaeopteryx does not fit that description, because (among other things) it had a long, reptile-like, tail, plenty of teeth, and it didn't really have a beak in the modern sense. That's because while, by most definitions, Archaeopteryx was a bird, it wasn't inside the crown group. In fact, it lived way earlier than that. 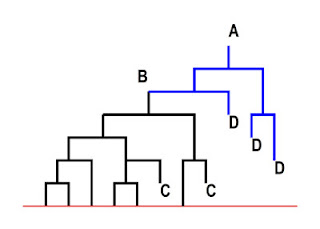 Here's an imaginary family tree of a group of animals. The red line is the present day. By our definition, the crown group is the bit of the family tree in black. It includes all the living animals - the ones that reach the red line - and also a couple of extinct ones, marked 'C'. We've defined the overall group in such a way that everything from animal 'A' on downwards belongs to it, but the crown group doesn't start until animal 'B'. But there's also a bunch of extinct animals, marked 'D', that fit whatever definition we started with, but aren't inside the crown group. These animals, represented by the bit of the family tree in blue, are referred to as stem taxa.

It's probably fairly obvious where I'm going with this. Juramaia, the 160 million year old fossil I talked about a couple of years ago, belongs to the same general group as the placental mammals, but it's outside - and far older than - the crown group. It's a stem taxon.

In fact, as I mentioned at the time, it's not really a placental mammal at all. That's because, since we can't actually tell how these early mammals gave birth, and what their placenta was like, we tend to define the clade "Placentalia" as being just the crown group. Anything more closely related to living placentals than to marsupials, such as Juramaia, goes into a broader group, which we call "Eutheria". All living Eutherians are placentals, but not all fossil ones are, and that's the difference between what the two studies are talking about.

What the new study has done is take a sample of various kinds of modern mammal and analyse their genetics and physical features to arrive at a family tree. Accounting for known rates of genetic change, calibrated by the ages of known fossils, they arrived at a date for the origin of the crown group of modern placentals of just under 65 million years ago.

This is significant because 65 million years ago isn't just some random date. That's the same time that an asteroid hit the Earth and finished off the dinosaurs.

So, what they're saying happened is this: During the time of the dinosaurs, there were a number of mammal species around. Some of them doubtless already gave birth to live young, in the same way that placental mammals do today, and could reasonably be described as "Eutherians". Then the asteroid hit, wiping out the dinosaurs and, presumably, some of the mammals. However, a number of mammals survived, finding the new world empty and ready to colonise. Many of them didn't leave descendants that survive today, but, by the luck of the draw, one species did. Within 0.4 million years of the asteroid impact - really a very short time period in evolutionary terms - this animal's descendants had diversified into the ancestors of every living group of placental mammals alive today, from whales to bats, and from rodents to primates. 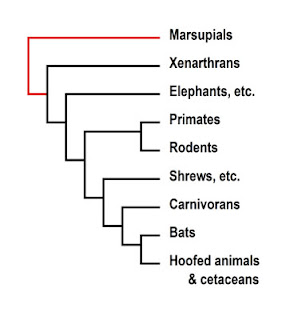 This is roughly the family tree they came up with. I've deliberately left out many of the smaller groups, such as tree shrews and rabbits, but the general pattern is there. Apart from the one marked in red (which isn't placental), every single branch on that diagram first appears in that 0.4 million year period after the asteroid impact. That's a lot of diversity.

The tree itself, at least in the outline I've used here, won't be a surprise to any zoologists. This is the tree we've known about for something like twenty years now. Indeed, the fact that it doesn't massively contradict existing knowledge may be a point in its favour, showing that there's nothing particularly odd about the way the analysis was done, for example. (I say 'massively', because the full chart does have some odd things to say about the evolution of bats, but that may be more detail than we need to go into today).

What's new is that date of 65 million years ago. Earlier studies had generally relied on genetic information only, rather than combining that with various physical features of the skeleton. Those studies gave a much earlier date for the origin of the crown group, implying that there were already different kinds of placental mammal around alongside the dinosaurs. The xenarthrans, in particular (a group of rather odd animals, including armadillos, sloths, and anteaters) have long been thought to predate the asteroid impact.

Problem was, nobody had ever found any fossils that corroborated this. Yes, there were Eutherian fossils that predated the extinction event, but we couldn't place any of them into living groups narrower than "yeah, it's probably a placental". There are no known rodents that old, for example, or even early armadillos. If all these groups only appeared after the asteroid impact, that would certainly explain things.

The study could not, of course, identify exactly what that last common ancestor was, the animal whose descendants ultimately gave rise to every living placental mammal. But they did feel confident in inferring what it would have been like, by looking for common features among the various animals and fossils examined. They say that it would have weighed between 6 and 245 grams (0.2 and 8.6 oz.), and that it probably ate insects and climbed trees. It gave birth, they say, to a single infant at a time, which would have been born blind and hairless, and developed in the womb with a fully formed placenta. It would have looked much like a long-tailed shrew, although with grasping paws for all that climbing.

There's a couple more points in the paper that I'd like to mention. The media reports I've seen seem to imply that the study was only looking into placental mammals, but actually it looked at others, too. Over 90% of living mammal species are placentals, but that still leaves over 400 exceptions. Almost all of these, of course, are marsupials; I've shown them in the simplified family tree above, marked in red.

According to the study, the origin of the marsupial crown group is probably also not too long after the asteroid impact, although possibly a little later than the origin of the placental one. Of course, marsupials have stem taxa, too, and there are a number of marsupial-like fossils that definitely date to before the extinction of the dinosaurs. Including these, the marsupial equivalent of "Eutheria" is "Metatheria". Stick both of these together, and, since both marsupials and placentals are alive today, you have another crown group. How old is that one, then?

127 million years is their best guess, almost as long before the asteroid impact as it is before our own time. But that figure brings me to my second point. Because Juramaia, the oldest known eutherian, is, as I said, about 160 million years old. Which is a problem.

As I mentioned when I discussed that fossil, most previous genetic studies had calculated that the eutherian-metatherian split occurred about 131 million years ago. 127 isn't too far off that, and, indeed, the oldest known metatherian fossil, Sinodelphys, is also about that age. This new study doesn't mention Juramaia, but they did examine the previous record holder for the oldest eutherian, Eomaia. That, they say, has been mis-identified. If they're right, it isn't a eutherian at all, but a stem taxon even further back in the evolutionary tree; something closely related to the ancestor of placentals and marsupials, but belonging to neither group. Logically, although they don't specifically mention it, they must also believe that Juramaia has been mis-identified, too. (Why they don't mention it, I'm not entirely sure - the lead author of the Juramaia paper is also a co-author on this one).

Maybe they're right - I certainly don't know. Which brings us full circle. I began by explaining why the two studies don't necessarily contradict each other, since the headline parts of them aren't talking about the same thing. But, when we look a bit deeper, it turns out that there is a contradiction, after all. Which will win out? Watch this space.

[Picture by "WWalas" from Wikimedia Commons]

Synapsida will be taking a one-week break, and should return 24th March
Posted by JK Revell at 14:23