In practice, of course, we can't really do that, but we can at least make a good guess by examining hundreds of anatomical features, seeing how they evolved, which creatures share them, and so on. When we do this, using powerful computers to do all the number-crunching (and, believe me, there's a lot) we usually end up with some pretty plausible family trees that fit with what we can see in the fossil record. Which shows that we're at least on the right track.

For example, there is a group of extinct animals known as "false sabre-tooths", which looked quite a lot like the real sort, but that are nonetheless different from Smilodon and its ilk, and lived quite a lot earlier. When we do the analysis, we find that these actually represent two different families, one of them close to the real cats, and the other much less so. They both turn out to be outside the the cat family crown group, but the first one at least, and probably also the latter, are inside the carnivoran crown group. So they're carnivorans, but not cats.

Of course, we're not forced to stick to the crown-group definition. For instance, if we try, we find that real sabre-tooths are outside the cat crown group, too, because their ancestors split away from the other cats before the common ancestors of house cats and lions parted company. But they're close enough that we're happy to call them cats, and leave it at that. It's at least possible that the earlier of the two families of false sabre-tooth has the same problem with respect to other carnivorans, but, again, they're close enough that we count them in either way.

But, the further we go back, the harder that sort of thing becomes to justify. The earliest definitive carnivoran fossils date from the mid to late Eocene, the second, and longest, epoch of the Age of Mammals. But, when we try to look back at what else was around at the time, and, perhaps more importantly, at what was around just before, the picture becomes decidedly murkier.

This sort of thing is, perhaps, unsurprising. The further we go back, the less fossils we have, and the less complete they're likely to be. If, for example, a group of animals is identified by the way the bones are arranged around the eye socket, and all you have is the lower jaw, you've got a problem. There's also the issue that the earliest examples of a group may not yet have evolved the specialist features that will make them so distinctive later, and they're likely to still be very similar to whatever it is that they've only just evolved from. There are no sharp dividing lines, and, on a long enough timescale, everything just blurs together.

When we look at the carnivorous mammals of the Eocene epoch we find, among other things, a family of animals traditionally called the miacids. Miacids were obviously closely related to the carnivorans, but were different enough that they clearly weren't examples of them. In fact, the more we look at them, the clearer it becomes that they aren't really a family of animals at all.

Instead, it becomes apparent that we've been defining them, not by what features they have in common with each other, but by what features they don't have in common with the true carnivorans. We have, albeit unintentionally, created a "wastebasket taxon", a group of animals where we put things that don't fit anywhere else, and that aren't necessarily close relatives.

However, in recent years, we've been making some progress in clearing out this wastebasket, in figuring out what miacids are, rather than simply what they aren't. This is the rough picture that's arisen: 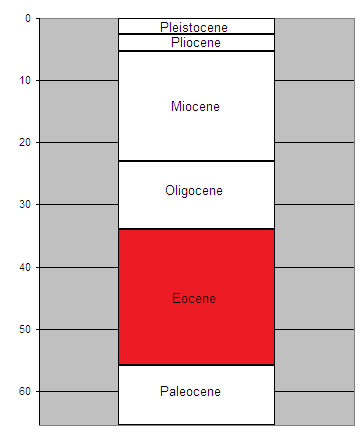 The very beginning of the Eocene epoch was a time of climactic change, of slow global warming towards a world much hotter than it is now. At around this time, a small group of early "miacids" began to spread across the world, adapting to the changing climate by rapidly evolving into a wide range of different species, many of which left no long-term descendants. At some point in the mid Eocene, one of these groups crossed an arbitrary taxonomic line, and evolved into the very first carnivorans.

So, somewhere in this array of fairly similar-looking creatures are the ancestors of the carnivorans we have today. We don't know exactly where, although an animal called Quercygale is probably about as close as we've gotten so far. Most, however, are cousins, and there are so many different groups among them, and so few fossils from each, that it's hard to say exactly how they relate to one another.

In 2005, however, we are able to untangle some of the picture when we discovered that some very early miacid-like animals did form a distinct family, which we now call the "viverravids". The picture for the rest remains confused, and this is especially true of the genus "Miacis", for which the family as a whole is named.

We're now confident that this genus, supposedly consisting of very similar animals that are meant to define what it is to be a miacid, consists of animals that aren't at all closely related to one another. One of them, "Miacis" cognitus, isn't even a miacid at all, but is actually (albeit distantly) related to dogs. And, yes, as a result, "Miacis", as traditionally defined, now officially gets quote marks round its name, on the grounds that it obviously isn't a real thing.

Another example is "Miacis" latouri, first discovered near Dormaal in Belgium in 1966.  Just two months ago, this received a new detailed description that was sufficient to give it a proper name, and we're now allowed to call it Dormaalocyon latouri. The authors also tentatively identified three new families within the great morass of miacid species, although the results are too preliminary for them to formally name them. (Although one, if it's real, would probably get called the "oodectids", which I personally think sounds rather cool).

The fossil is handy in another way, too. Most miacid species are known primarily from their teeth and jaws. Which is useful, because it allows us to trace the evolution of the carnassial tooth that defines so many modern carnivorans. But this species is the earliest one for which we also have part of the feet. The structure of its ankle appears to show that this was an animal that could grasp branches, which, combined with its small size, makes it almost certain that it lived up trees.

It would have looked, we can guess, vaguely like a pine marten or a palm civet. This fits pretty well with what we know of later miacids, and likely gives some idea of what the ancestors of the very first true carnivorans were actually like.

[Picture by "Ghedoghedo", from Wikimedia Commons]
Posted by JK Revell at 13:07