All the World's Deer: Deer from the Grasslands, Swamps, and Mountains

In 1758 Swedish naturalist Carl Linnaeus was able to describe six of the species of deer we know today. Five, of these, perhaps unsurprisingly, were the five species native to Europe. What may be more surprising is that the odd one out isn't the widespread white-tailed deer, or even one of the Asian species, but one from South America. (As an aside, he also identified two species of what he thought were deer living in Africa. One may not even be real, and if it ever was, was probably a misidentified antelope. The other is very definitely real, but is no longer considered to be a 'deer').

That one exception is what we now call the Pampas deer (Ozotoceros bezoarticus). These live, or at least used to, across much of central South America from central Brazil to northern Argentina. Today, they are found primarily in scattered patches of land across the region, although their numbers are just high enough in total to avoid being formally listed as a threatened species (although the same is not true of all the subspecies). The main reason for this is that their preferred habitat, as their common name indicates, is open grassland... and most of that has been converted into farmland, with some estimates suggesting that as little as 1% of the original habitat survives today, as compared with the late 19th century.

Pampas deer are noticeably smaller than the fallow deer of Europe, and so at the lower end of what we might describe as "medium-sized deer". Their coats are comparatively plain once the spots on the fawns disappear. Unlike most other American deer, their antlers do possess a brow tine; because the main beam forks at the tip, the result is a 3-point antler very similar to that of many Asian species.

Despite living in grasslands, while it is true that Pampas deer eat more grass than they do other plants (presumably because there's simply more of it where they live), unlike some of the Asian species, they are opportunistic mixed-feeders, happily munching on leafy shrubs and herbs when those are present.

By the standards of deer, they are not especially sociable. Groups rarely exceed five or six adults, and apparently this was equally true during the 19th century, when they were still common, so it isn't an effect of limited resources or declining population. The groups are typically mixed-sex, without the sort of segregation we see outside the rut among most other deer. Even among these small groups, however, there is a degree of social hierarchy, with dominant individuals of each sex subduing their rivals and doing most of the mating.

Despite the low latitude of their home meaning that day length doesn't vary much over most of their range, they still show a distinct seasonal pattern of behaviour, and cast and regrow their antlers at specific times of the year. The size of a stag's antlers are related, as is usual, with testosterone levels so that, for example, a stag kept apart from hinds and getting little chance to show off his masculinity grows smaller antlers than he otherwise would. Births occur mostly in spring, and twins are rare, although not entirely unheard of.

The closest living relative of the Pampas deer is the marsh deer (Blastocerus dichotomous) - not be confused with the "swamp deer", which is another name for the barasingha. This is notably larger than the Pampas deer, and, in fact, has a shoulder height comparable to that of red deer and elk. However, a lot of that comes from the fact that it has unusually long legs for a deer, so that, while it is still heavier than (say) a fallow deer, it isn't as much so as one would expect from its height.

Other distinctive features include the fact that the lower legs are black in colour, offsetting the richer brown of much of the rest of the coat. Antlers are four, or sometimes five, pointed. The growth pattern is slightly unusual, though, with the antler spitting in two and then each branch splitting in two again - the forward branch may be equivalent to the trez tine of other deer, which, if true, would make it one of the few deer in which this has a branch of its own.

Marsh deer live in roughly the same geographical area as Pampas deer, but inhabit wetlands and seem to actively avoid places that aren't at least partially covered by 30-60 cm (one to two feet) of water. As one might expect, given that, they are excellent swimmers, and their feet have the sort of wide-splayed hooves that you need to walk on soft mud. Unlike the barasingha, however, they are not pure grazers, with the bulk of their diet consisting of soft water plants rather than grass. Their preferred foods seem to do best in seasonally flooded areas, and the deer move throughout the year as wet and dry seasons come and go. 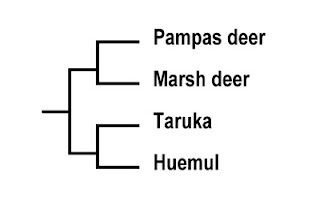 Such habitats are less common than the grasslands preferred by Pampas deer, and are declining at least as rapidly. As civilisation expands, wetlands are either drained and turned into agricultural land, or flooded to create reservoirs or hydroelectric plants, and the marsh deer does seem to be declining more rapidly than its grassland relative. It is internationally recognised as a threatened species, but the decline is more severe in some places than others - it is, for instance, now entirely absent from Uruguay.

Like its close relative, the marsh deer is not especially sociable. However, it follows the more usual cervine pattern of the females living in small family groupings of four or five adults, and the males living apart, and alone, when they aren't in rut. Speaking of which, there doesn't seem to be much of a rutting 'season' as such, with the activity being spread throughout the year. Births seem to be more common at times of the year when the water is receding (which can vary from place to place), perhaps to make it easier for small fawns to travel. In captivity, however, where this isn't a concern, there's no discernable birthing peak at all.

Although deer have not been in South America very long, in evolutionary terms, they have nonetheless adapted to a wide range of habitats - presumably because there wasn't anything else deer-like already using them. While some deer occupied the grasslands and marshes, and others made use of the forest, some headed west... and upward into the mountains. Today, two closely related species of deer inhabit the Andes. They are known by various names, including variations on "Andean deer", but I'm going to use the ones that seem to be most common in the modern scientific literature.

The taruka (Hippocamelus antisensis) inhabits the central Andes, in Peru, Bolivia, and northern Argentina, with a few reports from the northern border of Chile. (The name, incidentally, is often spelled with a 'c' instead of a 'k'; both appear to be valid). It lives in rocky slopes, often with relatively sparse vegetation, although it seems adept at finding young shoots and fresh grass amidst the scree. They can be found as high as 5000 metres elevation (16,400 feet) during the day, but migrate downslope in the late afternoon to shelter at lower elevations through the night.

The huemul (Hippocamelus bisculcus) lives much further south, with no overlap, or even contact zone between the two species. It is found only in southern Chile and Argentina, reaching the northern parts of the Tierra del Fuego archipelago in the extreme south. This region, of course, is colder than that inhabited by the taruka, so the deer doesn't venture so far upslope, seeming to have an upper limit of about 3000 metres (9,800 feet) and living in coastal fjords in the far south. Its preferred habitat is aparsely wooded meadows and heathland, and there have been claims that it once lived across lowland Patagonia as well as the mountains, although the accuracy of this is debatable. They seem to be primarily browsers, eating leaves from trees and bushes more than they do grass.

The two kinds of deer look very similar, with a greyish coat, short tail, long ears, and a white rump patch. They are between the marsh and Pampas deer in size, with the huemul being, on average, slightly the larger of the two. Their antlers are unusually simple for a deer of their size, with a trez tine and an unbranched beam, for just two points in total.

Neither species is especially gregarious. Tarukas live in loose groups, but the membership of these changes constantly, rather than being fixed from year to year. The groups are mixed-sex for most of the year, but the males wander off to let the females do their thing when it comes time to give birth and raise young fawns. Huemul of both sexes, on the other hand, often travel alone, and when they do group together (except perhaps temporarily when several of them find the same feeding spot) it's still only in pairs, or, at most, sets of three. Perhaps due to the difficulty of finding mates in sparsely populated, mostly barren, terrain, huemul bucks tend to be serially monogamous, courting just one female a year - most unusual behaviour for a deer.

The taruka is under threat, with a declining population due partly to its reliance on regular water supplies - these are rare where it lives, so it doesn't take many farms to use them up. Illegal hunting is also a problem, as are attacks by farm dogs and the like. The huemul, however, is in a worse position, and is formally listed as an endangered species, with an estimated population of less than 1,500 adults. Their serial monogamy has one advantage here, in that they don't end up inbred, but the remaining populations are highly fragmented and may have been in decline since even before the Spaniards arrived (although it has become much worse just in the last few decades).

Like all other American deer, except for the elk, these species all belong to the capreoline branch of the deer family tree. That branch, however, first appeared in the Old World, before crossing over to the Americas, where they had more long-lasting success. Nonetheless, some capreoline species do remain in Europe and Asia, and I'll be looking at some of those next time...