All the World's Deer: Deer from the Ganges and Beyond

At least before the rise of intensive agriculture, India, with its lush vegetation, was prime habitat for deer. The constraints of geography - the Himalayas to the north and deserts to the west - keep it separate from Europe and central/northern Asia at least, but it's a very large place, able to support a number of local species. When it comes to deer, there are no less than seven species native to the country, although four of those are only found in the north. Across the great bulk of the country, two medium to large species are common: the sambar and the chital. But there used to be three.

That third one was the barasingha (Rucervus duvaucelii). Fortunately, while I say 'used to be', I don't mean that it's extinct, as its closest relative, Schomburgk's deer is. Just that it's no longer common and widespread. It's primarily a grazing species, feeding in long grasslands and on forest edges and there used to be many of these on the Indian subcontinent. As recently as the 19th century, barasingha were found across almost the whole of central and northern India (aside, of course, from the Rajasthan desert) as well as in neighbouring parts of Pakistan, Bangladesh, and Nepal. They were especially common along the great floodplains of the Ganges and Indus Rivers.

Which, as it turned out, was the problem. Both river systems have been the focus of human agriculture since very early times indeed, but the 20th century saw an enormous increase in the amount of truly intensive agriculture. While sambar and chital are primarily forest animals, the reliance on grassy plains posed a much more serious issue for the barasingha, and their population crashed between around the 1930s and the 1960s. Barasingha have vanished altogether from the vast majority of their former range, and are no longer found in Bangladesh or Pakistan at all.

Their current population is estimated to be less than five thousand, and it is almost certainly continuing to decline. The great majority of this population are found in a band to the north of the Ghaghara River, a major northern tributary of the Ganges. Around half of these are in Uttar Pradesh, with the remainder  being found in two protected areas in southern Nepal. (There are some plans to reintroduce them to a third Nepalese area, but prior to the 20th century they lived in at least four). In 2005, a smaller population was discovered clinging on in the Jhilmeel Jheel conservation area in Uttarakhand, some way to the west, where it had been thought to have died out. 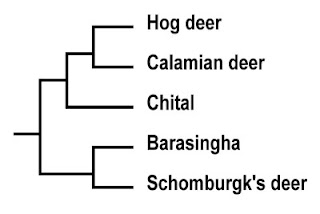 This clearly isn't good, and one estimate shows that only around 3% of northern India may still harbour the sort of flooded grasslands that they need to survive. This isn't enough to formally list them as an "endangered species" on the main international list for such things - just a "threatened" one. But this is really only true if we consider the species as a whole. That's because, between 1.3 million and 170,000 years ago, during the Ice Ages, the barasingha split into three subspecies, and two of them would count as endangered if we listed them separately.

These rarer subspecies are distinguished from the main surviving one by reliance on much drier grasslands, and their hooves are not so splayed for walking on soft ground. One of the subspecies is found only in Assam, in northeast India, mostly in the Kaziranga National Park, also one of the last holdouts of the Indian rhinoceros. The other survives in the Kanha Tiger Reserve in Madhya Pradesh, having been extinct everywhere else since the 1960s. Both populations are separated by hundreds of miles from that of the main surviving subspecies, and likely consisted of less than 500 individuals each around the turn of the century, although the Assamese subspecies may have recently started to rebound.

The barasingha is a large deer, almost the size of a red deer. The name translates as "twelve points" in Hindi, because fully grown males have six tines on each antler. After the brow tine, which branches off in the usual way, the beam splits into two; the longer branch, which is likely what would be the trez tine in a red deer, has a crown of two or three points, while the shorter rear branch carries the remaining two tines.

Barasingha are a moderately social species, living in small family groups outside of the rut, but occasionally gathering into much larger herds - at least in historical times. They are active primarily in the early morning and later afternoon, resting in the heat of the day. One report concerns the scent glands in front of their eyes, which are often opened and enlarged during times of stress or aggression in red deer, sambar, and so on. This is likely a visual signal to others of their kind, and it seems that, in barasingha, any sufficiently serious and exciting activity can be signalled in this way, not merely , conflict, since they also open it during sex.

Unlike the barasingha, the hog deer (Axis porcinus) does not seem to have reached any further south than the Ganges, and has only ever been found in the northern parts of the country. It was, however, still much more widespread in the past than it is today, being found from Pakistan right across into Southeast Asia and southern China. There are a few in Sri Lanka, but this is so far outside of the rest of its range that they are generally thought to have been introduced there centuries ago; this has been questioned, but remains the leading theory today. It's sometimes placed in its own genus, Hyelaphus, but is clearly a close relative of the chital, and so usually grouped with it in Axis.

It's another grassland species, living only in riverine flood plains, but, for reasons that aren't entirely clear, has not fared even so well as the barasingha. Perhaps it has more specific requirements, since while it does not restrict itself entirely to eating grasses, also feeding on herbs and the like, its favoured food appears to be wild sugarcane which, as one might expect, tends to grow in areas of ideal for agriculture. In Nepal, flooding of its native valleys for hydroelectric projects has also hastened its recent decline.

However, whether we should consider the hog deer to be in a more precarious position than the barasingha is a matter of definition. The worldwide population is probably quite a bit higher, with several thousand living in the above-mentioned Kaziranga National Park in Assam. But, at the same time, the numbers of the animal living elsewhere have undergone a massive collapse in the last few decades, dropping by around 50% every twenty years - something that clearly isn't sustainable. It's for this reason that the hog deer is, unlike the barasingha, formally listed as an endangered species.

Since the 1980s, hog deer have entirely vanished from Cambodia, Laos, Thailand, and Vietnam, and possibly also southern China. The status in Myanmar and Bangladesh is uncertain - they do seem to survive there, but the population is maybe a tenth what it was as recently as 2000. On the plus side, a population was reintroduced to Thailand in the early 2000s, where they seem to be doing well, and there is another introduced population in Australia, showing more adaptability than one might expect. Even the small Myanmar population does not yet seem to be showing signs of severe inbreeding, and the Indian and Pakistan populations, while at risk in some localities, have not yet suffered such a severe decline as those further east.

Hog deer are medium-sized as deer go, being slightly smaller than a fallow deer and with shorter legs. They have a plain brownish coat that becomes greyer in winter, and fawns of the eastern subspecies don't always have spots. Like many medium-sized deer, their antlers have three tines; a brow tine and a terminal fork. Most reports suggest that, outside of the rut, they aren't very social by the standards of deer, rarely travelling in groups of more than three - although it is certainly possible to see several temporarily gathered together in prime feeding grounds.

Today, there are usually regarded as being two subspecies of hog deer, which diverged during the last Ice Age. For much of the 20th century, however, there were thought to be four. In the 1980s, however, two of them were promoted to full species rank... and they are both endangered, too.

Both are island species, marginally smaller than the regular hog deer, although there is considerable overlap, and otherwise looking, and behaving, pretty much the same. The more numerous of the two is the Calamian deer (Axis calamianensis) which lives only on the Calamian Islands, a small group of islands in the western Philippines, north of the much larger island of Palawan. Indeed, the deer only seems to have died out on Palawan around 4,000 BC, and once occupied more of the Calamian Islands than they do today.

Now, however, they are found on only two of the three main islands of the group, and a number of smaller ones - one of which, Calauit, has consisted entirely of a safari park (complete with zebras, antelopes, and giraffes imported from Kenya) since the forcible eviction of the indigenous inhabitants in 1976. In good news for the locals, the end of the Marcos regime meant that some of them have been allowed back in recent years... which, unfortunately, was bad news for the deer. Only a few hundred may still survive there today, where illegal hunting of the animals likely continues; they are no such reserves on the other islands, although they also have more wilderness in which to hide.

The total area in which Calamian deer are still thought to live is around 2,500 km² (1,000 square miles). Which isn't much, but is rather more than the remaining habitat of the other species, the Bawean deer (Axis kuhlii). Although this used to live on Java a few thousand years ago, it now inhabits only a few hills in the interior of Bawean Island in the Java Sea. The island as a whole only has an area of 200 km² (75 square miles), much of which is taken up by a couple of towns and their surrounding farmland and villages.

It has been illegal to hunt them since 1977, and this may have helped them somewhat, but the population remains terribly low; a 2016 estimate put the total population at no higher than 416, and probably lower. Given the extremely restricted area within which they live, and the practice of illegal logging on the island, it's probably dropping, and the species is considered "Critcally Endangered" - the highest possible warning level.

Enough doom and gloom, at least for now. You may have noticed that, in the first paragraph of this post, I mentioned that there were seven species of deer native to India, and I've so far only mentioned six (the two here, plus the Central Asian red deer, Thorold's deer, and the chital and sambar). I'll be getting to the other one later in this series, but before then I want to head out across the Atlantic to look at two common and decidedly not endangered species native to the USA...