The most widespread species in this grouping, as it is now recognised, is the sambar (Rusa unicolor). This is a relatively large animal, perhaps slightly larger even than the red deer, with thick and rugged antlers on the males and a comparatively long tail. The scientific name implies a bland coat, which is true enough, but hardly unusual among deer - what makes it distinctive is that the fawns are the same colour, and don't have the spots seen on most other species. Unlike red deer, sambar have antlers with just three tines; a brow tine which appears in the second year of life, and a terminal fork that appears around the fourth.

Sambar live across a wide geographic area, being found throughout almost the whole of India and Southeast Asia, including populations on Sri Lanka and Taiwan, and across both Sumatra and Borneo in western Indonesia. There are at least five subspecies across this range, with some considerable variation in size that led to a number of separate species being named in the 19th century. They have also been widely introduced into other countries, and, for example, their Australian population is currently expanding. 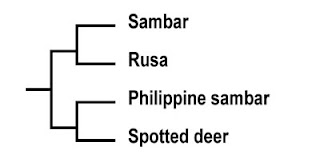 Given free choice, sambar seem to graze more than they browse, having a higher proportion of grass in their diet than most other deer. However, they are very adaptable, readily switching their diet to whatever is available, helping to explain their wide distribution and the success of their introduced populations. They inhabit a wide range of forest types, which likely explains their variation, although there is a tendency to prefer hilly terrain over lowlands. The latter, may however, be due to a desire to avoid human interference and agriculture, since, in at least one animal sanctuary, they are particularly common in wide river valleys, where the food is presumably richer.

By the standards of deer, sambar are not very sociable. Females live in small family groups, often with just two adults and a single fawn, while adult males are almost entirely solitary unless gathering around a waterhole or similar resource. Even during the rut, the stags do not gather harems, simply wandering about between as many existing female groups as they can and driving off any rivals. As with other deer, the growth of the antlers is determined by testosterone levels, and the males generally act up to get the females to notice them, stomping on the ground, wallowing in mud, and rubbing the large scent glands on their necks against trees.

Through most of the 20th century, the closest relative of the sambar was generally accepted to be the rusa (Rusa timorensis), sometimes called the "maned sambar" - although the word 'sambar' is Hindi, and not native to where rusa are found. Rusa were first identified on the island of Timor, but are also found through much of Indonesia. However, modern thinking is that they are really only native to Java and Bali, with the populations on Timor, Sulawesi, and so on having been introduced to those islands in ancient times. More recently, they, like sambar, have been widely exported to live elsewhere, with the population on Mauritius (off the coast of Africa) dating all the way back to the 17th century.

Rusa are physically smaller than sambar, although not unusually so for deer. Their antlers are more slender, with a forward-pointing 'trez' tine and no terminal fork (so, still three points, but a subtly different arrangement). While both sexes of sambar have a mane, this is only really present on the males in rusa. Like sambar fawns, those of rusa have no spots. They are predominantly animals of low-lying tropical grasslands, only occasionally venturing into forests since, while they will eat almost any vegetation, they greatly prefer grass.

Rusa are also behaviorally different from sambar. Specifically, females do actually live in herds, which can number up to two dozen, and even the males prefer to stay in small groups. They are mostly active during the day, whereas sambar are most active around dawn or dusk and sometimes even nocturnal. Despite regularly being farmed in recent times, they don't always take well to domestication.

An unusual feature shared by both sambar and rusa is the presence of large preorbital glands in front of the eyes. These are found in all deer, but are rarely so prominent. It's assumed that, since these glands can actually be opened and even partially flipped inside out, they are involved in visual signalling, as they are in red deer. Quite what they might want to signal is unclear, although it seems mainly to be relevant to stress and conflict. In rusa, this has even been seen during a contest between two hinds, something not (yet) observed in red deer.

In the 20th century, there were considered to be two dwarf forms of Sambar living in the Philippine Islands, both of which are now recognised as distinct species. The first of these is the Philippine sambar (Rusa marianna), originally identified from the remote Marianas Islands, where it had been artificially introduced in the 18th century. In fact, they live wild throughout the Philippines, mostly on forest edges.

The Philippine spotted deer (Rusa alfredi) is slightly smaller even that its unspotted relative, and with shorter antlers. Alternative names include 'Visayan spotted deer' since it is found only on the Visayan Islands of the central Philippines, and 'Prince Alfred's deer', since the first scientifically described specimen had been collected by the son of Queen Victoria. Its most distinctive feature is, of course, that the young don't lose their spots at all, although it has to be said they are rather less visible than on some other species of deer.

We don't know much about this particular species, in part because it is very rare outside of captivity. Formally listed as an endangered species, it once lived across much of the Visayan Islands, but is now found on just two, having been extirpated from at least 95% of its former range, remaining only on a few forested slopes deep in the island interiors. It has been estimated that only around 700 adults currently survive, and that number is likely falling. Judging from how they behave in captivity, they another sociable species, but their population simply isn't large to support that in the wild, where they are seen in much smaller groups than they seemingly prefer.

The common ancestor of all these animals likely lived on the mainland around 1.8 million years ago, during the early Pleistocene. As the Ice Ages dawned, sea levels dropped, and they crossed over to Java, where the population there became more adapted to the local grasslands, thus dividing the sambar from the rusa. Mitochondrial DNA studies appear to show that the two larger species are more closely related to each other than to either of the island forms (as shown in the cladogram) but this may be due to some hybridisation between sambar and rusa in the mid to late Pleistocene, in which case, more wide-ranging nuclear DNA studies might give a different picture.

The exact identity of the common ancestor of these species is debated, although Epirusa hilzheimeri is the most commonly cited candidate. Similar questions arose in the 2000s about the closest living relative of the much more famous "Irish elk", a huge prehistoric deer with disproportionately large antlers. We're pretty sure that we've solved that one now, and it's to that living relative that I'll be turning next time...