Just What Is a Red Panda, Anyway? 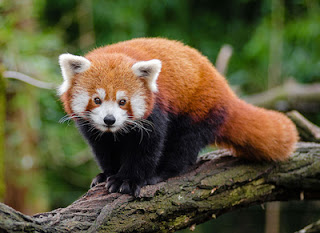 Last week, as it sometimes does, the topic of red pandas came up in conversation. The person I was speaking to was well aware that red pandas are not very closely related to the more famous giant pandas... but he had no idea what they actually are related to. It occurs to me that, while I've often posted on the evolutionary relationships of closely related animals within the various mammal families, I've posted rather less about how the different families are related to one another. So, let's look at that, from the perspective of trying to figure out which mammal family it is that the red panda belongs to.

The red panda (Ailurus fulgens) was first formally described by Frédéric Cuvier, brother of the much more famous Georges Cuvier, in 1825. He gave it the scientific name that it still bears, which translates to "shining cat" because of what he thought it looked like. Of course, this was long before Darwin, so he wasn't suggesting that the animal was literally related to cats, since, like his brother, he presumably thought that all species were created independently. In fact, probably because of the bushy striped tail and the shape of the teeth, he instead placed it within the recently named raccoon family, the Procyonidae.

Other scientists of the day agreed. The animal certainly looked like a fluffy short-faced raccoon, and, at a time when Lamarck and Geoffroy Saint-Hilaire were still the main proponents of the theory of evolution, for most people, which taxonomic family you placed something in was even more a matter of convenience than it is today. Like raccoons, for instance, it had sharp canine teeth marking it as a carnivore, but cheek teeth that looked less suitable for slicing meat than one would expect (indeed, even less so in red pandas than in raccoons).

Nonetheless, when the first specimen arrived at London Zoo in 1869, the keepers dutifully tried to feed it meat. It refused, and kept on refusing, no matter what meat they tried. Clearly, they decided, it was ill, and eventually, in desperation, they took it out of its cage and led it about the park on a leash in the hope of brightening its spirits. The starving animal immediately dived on the first rose bush it came to, and then proceeded to demolish the fruit of an ornamental pear tree. In short, they had a vegetarian "carnivore". Oops.

But 1869 also saw another significant development. In March of that year, a French missionary and amateur naturalist by the name of Père David received the skin of a mysterious, and previously unknown, animal from a Chinese hunter. He never saw an example of the living beast that it belonged to, but he had enough to give the creature the scientific name Ailuropoda melanoleuca - meaning "black-and-white cat-foot". Nowadays, we call it a "giant panda".

It isn't entirely clear where the word "panda" actually comes from, although Cuvier was probably responsible for coming up with it, as it seems to have already been used, in French, for the red animal before the giant one was discovered. Certainly it isn't what the Chinese or Nepalese call either of the animals, which tend to be variations on the local words for "cat" and "bear".

By the turn of the 20th century, with the theory of evolution by natural selection by now firmly established, there was fairly strong agreement that the two kinds of panda were indeed, each other's closest relatives. There were a lot of reasons to think this, since there have some striking similarities. Their teeth and skulls have a similar form, and their penises are an odd S-shape, which, if not unique, is at least unusual. Most significantly of all, they have a second "thumb", in both cases formed from a wrist bone located on the opposite side of the front paw from the real thumb.

The one thing that was clear was that, for all their vegetarian diet, they were part of the larger group of mammals referred to as "carnivorans". We can also narrow it down further than that, because carnivorans can be divided on the basis of the structure of the bones around their ear. In "cat-like" carnivorans, the chamber enclosing the middle and inner ear is divided in two, being derived from two different bones, but in "dog-like" carnivorans, there is only one such bone and the chamber is only partially divided, if at all. Numerous studies have shown that these are genuine evolutionary signals, reflecting a very deep split within the carnivoran family tree.

Both red and giant pandas, it turns out, have an undivided chamber, placing them on the "dog-like" half of the tree. Which is a start, but doesn't get us that far, because both raccoons and bears are also on that side of the tree, and they're by no means alone. To really get further, and resolve the mystery, we need to turn to modern genetic evidence.

By comparing the genetic structure of different species, we can not only see which ones are more closely related, but also, by making some assumptions about the rate of genetic change, and calibrating that against the age of known fossils, get some idea of when different groups diverged from one another. In practice, we can't (yet) compare the entire genomes of different species to find out exactly what's going on, but, by picking particularly common genes found across a wide range of different animals, we can at least get reasonably close. If we repeat the procedure with multiple different genes, and consistently get the same answer, we can also be more confident that we're right.

When we do this for the dog-like carnivores, we consistently find that the dogs themselves represent the earliest branch of the family tree. The dog family, in fact, turns out to be really ancient, dating back somewhat further than its oldest known fossils, likely to the early Eocene around 50 million years ago.

The next major event in the evolutionary history of the group is the appearance of the bears, about 5 to 10 million years later. Here, genetic evidence provides us with the answer to at least one of our questions: giant pandas turn out to be, unquestionably, bears. They are, admittedly, rather odd bears, and we, do in fact, know of some fossil pandas dating to over 10 million years ago that show that, by that time, they had already diverged from the ancestors of all the other kinds of bear, from brown and black to polar and spectacled.

It is also round about this time that we see the first dog-like carnivores heading into the water. These are the ancestors of today's pinnipeds, although the seal and sea lion families as we now understand them didn't appear until much later. Back on dry land, however, we are left with an evolutionary branch consisting of relatively small carnivores, most notably the raccoon and weasel families.

These first appear much later than the other groups I have mentioned so far, perhaps around 15 to 20 million years ago. But early analyses of their genetics did throw up one surprise, which more recent studies have confirmed.

Skunks had long been assigned to the weasel family, and this makes a lot of sense; the weasel family is already diverse, consisting of everything from badgers to otters, alongside more obvious examples such as stoats and ferrets. Skunks certainly seem similar to weasels in a number of ways, and it's notable that most mustelids do have quite pungent anal scent glands, and a number of them can spray the stuff at anything they consider threatening. Indeed, mustelids such as the zorilla not only have a spray that's at least as bad as that of skunks, they even have the same colour pattern and broad physical appearance.

But the genetic evidence shows us that things are not so simple. That's because raccoons turn out to be more closely related to mustelids than skunks are, so that the ancestors of skunks must date back to before the first members of the modern weasel family appeared. The skunks were consequently promoted to full family rank. They were even joined in their new family by some remarkably smelly "badgers" from Indonesia, which had turned out not to be real badgers at all.

That leaves us with five families of land-dwelling dog-like carnivore: the dogs, bears, weasels, raccoons, and skunks. Until they died out in the early Ice Ages, there had once been another: the amphicyonids or "bear-dogs". We have no genetic evidence to place them within the tree, although the general agreement based on their bone structure is that they were probably most closely related to the true dogs. Depending on your opinions, there may be others, too, with the hemicyonines, or "half-dogs" sometimes being regarded as a family in their own right, and sometimes as an early branch within the bear family.

Which brings us back to our original question. What does the genetic evidence tell us about red pandas? One thing is clear: they really aren't close relatives of giant pandas. All of those similarities are just coincidences. Well, not exactly coincidences, but more the result of two animals that have evolved to eat a diet consisting almost entirely of the same thing: bamboo. Those extra "thumbs", for example, are great for holding onto bamboo stems while you're eating, regardless of what species you happen to be. But, if they aren't smaller versions of the giant panda, which of the five available families do they belong to?

The exact details still aren't entirely settled, and based on the exact choice of genes and how to analyse them, just about every possible answer has been proposed at least once. (Yes, even that they're related to dogs). But what is clear is that they're so different from everything else that we have no choice but to put them in a family all by themselves. They do have a surprisingly long, if not very complete, fossil history, so we know that other members of their family did once exist - and ate a lot more meat than the living sort does.

But the general consensus is that they fit broadly within the raccoon/weasel/skunk group, yet branching off somewhere that places them outside all three of those families. It's probably fair to say that the most common theory today is that they split from the common ancestors of raccoons and weasels before those split from one another, but after the divergence of the skunks, although the exact order of events is difficult to resolve with certainty. This may have happened around 35 million years ago, at a time of rapid diversification within the wider "musteloid" group.

Anyway, the most definitive answer we can give to the question "what is a red panda?" is: "it's a red panda." We're pretty sure on that one.

[Photo by Mathias Appel, from Wikimedia Commons. Cladogram adapted from Nyakatura and Bininda-Emonds 2012.]
Posted by JK Revell at 12:04