Giving birth and looking after newborn young are particularly dangerous times for the large hoofed herbivores. That isn't to say that it isn't difficult for other mammals, too, or, indeed, other animals in general, but the larger herbivores are especially vulnerable. Smaller animals can hide their young in burrows, or other secluded dens, until they come of age, while the larger carnivores don't generally have to fear being eaten. Large herbivores do not have such a luxury.

However, hiding from predators while the young are still small and vulnerable is not the only concern that mothers have to face. Giving birth is costly in terms of resources, and after that, the young must be fed milk until it is large enough to search for food on its own. The mother, therefore, needs to keep herself well fed, and needs a good supply of food to keep both herself and her infant healthy. While this is obviously true at any time of the year, during the birthing season it becomes particularly important for the mother to find an area that is both free of predators, and has a ready source of available food.

Weasels on the Farm: Ferrets and Polecats

The great majority of the animals that mankind has domesticated are herbivores; horses, cattle, sheep, camels, guinea pigs, chickens, and so on. Of course, there are always exotic pets, and birds of prey kept for falconry, but when it comes to carnivorous species domesticated for long enough that they are distinctly different from their wild ancestors, there are really only three: cats, dogs... and ferrets.

Of course, ferrets have been domesticated for far less time than either cats or dogs. Quite when this first happened is unclear, although we know that the Romans bred them for catching small animals such as rabbits down burrows, and they may not have been the first to do so. Today, ferrets are often considered sufficiently different from their wild kin to be classed as a different subspecies (just as cats and dogs are). Unlike the wild forms, they are often white or pale yellow in colour, and many are true albinos, with bright red eyes. However, the coat colour can be quite variable, including tan, reddish-brown, dark brown and true black, often with markings that can be clear enough to give a 'Siamese' appearance. Although the colour variation is less than among, for example, cats, the American Ferret Association nonetheless manages to recognise a full 38 possible colour patterns for show purposes.

Bats Can Be Colourful, Too

It's stating the obvious to say that mammals have a range of different colours and coat patterns. The purpose of all these different markings can be varied: they may help to identify members of particular species to their kin, they may be used for sexual attraction, they can act as camouflage, and so on. Nor is there any particular reason to suppose that a given pattern has to serve only a single function. There are a great many colourful mammals, but bats are generally not among them.

The bats are the second largest order of mammals, after the rodents, including a total of nineteen different families - most of them with really obscure names - and well over a thousand different species. Yet, despite this great diversity, most bats are pretty much the same colour all over - usually a variation on the theme of "it's brown". But not all of them; many bats are surprisingly colourful, and you might wonder what the point of that is if they only come out at night, and spend the rest of the day sleeping in pitch black caves. The question really is not so much why are most bats so bland, but why aren't they all that way?

Except, of course, that not all bats do live in caves, and that may well have something to do with it. For the second largest order of mammals, bats have not been as well studied as most other groups. Most of the studies that have been conducted have tended to focus on the undeniably cool fact that bats navigate using sonar. Yet they are a very interesting, and one might even say peculiar, group of mammals. It may be, for example, that just looking at the colours of bats can tell us something about the reasons for coat patterns in mammals in general. A recently published survey by Sharlene Santana of UCLA, and colleagues, examined published descriptions of over nine hundred species of bat, cross-checking the patterns of their fur with their lifestyle. Was there... well, a pattern to the patterns? 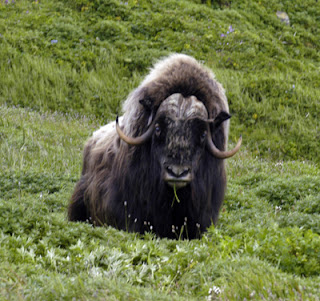