Apologies for the absence of a post last week. This was due to personal circumstances that meant I just couldn't bring myself to write. Normal service has now been resumed.

Six million years ago, there were many different kinds of sabretooth cat in Europe. That, however, all came to an end with the Zanclean Flood and the dawn of the Pliocene epoch. It's not that they literally drowned in the flood, of course - almost by definition, most of the parts of Europe we know today were above where the flood waters stopped. But Europe changed in the aftermath of the flood, seeing, over an admittedly long period of time to human eyes, a change in the nature of the herbivores that lived there. And, when the herbivores change, so do the animals that have to eat them.

Most of the European sabretooths died out in the very earliest part of the Pliocene. The one exception was the "terror cat" Dinofelis, which became perhaps the dominant large predator in Europe for the next million years or so. However, once the climate took a turn for the worse, and the long prelude to the Ice Ages began around three million years ago, Dinofelis followed its relatives into extinction. 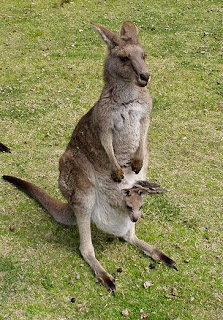 Mother mammals raise their young until they reach independence. This is hardly a surprising statement, and, while mammals are by no means unique in this regard, it is one of their distinguishing features.

The mother may, of course, receive assistance in this sometimes arduous task. In monogamous species, the father also helps in raising his young, and this is one of the main reasons for evolving monogamy in the first place - if the young require care by two parents in order to stand a decent chance of survival, then the father had really better stay around. But this is not the only source of such assistance. In many mammals that live in social groups, we see the phenomenon of alloparenting. This means that individuals other than the parents take up some of the burden of looking after the young. Usually these are younger, non-breeding, females, cooperating to raise infants communally, although it doesn't have to be.

At least 120 mammal species, and an even greater number of birds, engage in this to at least some extent. The benefit to the infants is obvious, especially where they require a significant investment in time and effort in order to reach maturity. But what's in it for the alloparent?

The shrew family contains what are, by the usual method of measuring such things, the smallest of all living mammals. Yet they are actually quite a large group, with well over 300 species so far identified, and, given their small size, probably quite a lot that we don't yet know about - especially in the tropics. Indeed, in the grand list of mammal families, they come fourth in terms of sheer number of species, beaten only by the rats and mice, the cricetids (most, of which, frankly, are also mice, although the group also includes the voles and hamsters), and the vesper bats. They may not have the greatest range of physical variation, at least to human eyes, but that's still quite a lot of diversity, and they certainly aren't "all the same".

It's perhaps worth pointing out, though, what a shrew is, and what it isn't. Firstly, while they may look kind of like mice, shrews are not rodents. Rodents are defined by the presence of great gnawing incisor teeth, and by not having the second set of incisors that rabbits have. Shrews don't look even remotely like this, having lots of small sharp teeth ideally suited for biting into insects. In fact, shrews' closest relatives are actually the moles and hedgehogs - relatively small animals that also eat a lot of invertebrates.

Most members of the dog family can be described, broadly speaking, as "foxes". The term "fox" no longer has a strict scientific meaning, since it encompasses two separate lines of evolution that aren't directly related to one another. Furthermore, as we'll see in a few month's time, there are some animals within those lineages that really aren't foxes at all, as we'd normally think of the word.

Nonetheless, it's a term that's widely used, and is taken to refer to small to medium-sized canids that have have bushy tails, prominent ears, pointed snouts, moderately long legs, and so on. The archetypal such animal, and the one that most people in the Northern Hemisphere likely think of first when the term "fox" is used without any further qualification, is the red fox (Vulpes vulpes).

The red fox is, in fact, the largest of the "true" foxes (as opposed to those of the second, younger, evolutionary line, which are actually more related to wolves). It is also perhaps the most brightly coloured of all foxes, although there is some variation in the coat colour, with brown, yellowish, and even silvery-grey individuals. None of these match directly to any of the more than forty subspecies that have been identified over the years, although it's likely that many of those represent rather finer hair-splitting than is actually required.