Dive of the Fossil Penguins 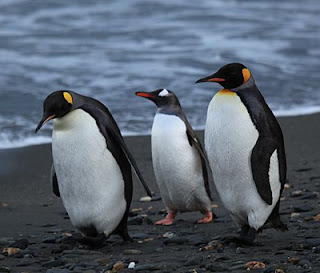 This is the post that will be current as of 1st April 2016. I will therefore be following my long-running annual tradition (that's "long-running" as in, "I've kept up this annual tradition for a whole year now") of posting about something that isn't a mammal, or even a synapsid.

When we think of 'birds' the ability to fly is surely one of the first things that come to mind. Indeed, the development of flight was surely one of - if not the - defining moments in early bird evolution. But, whereas bats have never given up that particular evolutionary innovation, flightless birds have evolved more than once. And, because we know that the very first birds could already fly, it follows that all flightless birds have ancestors that were perfectly capable of flight, but, for whatever reason, lost the ability.

Many, such as ostriches, did so to develop a fully land-based lifestyle, often becoming much larger in the process. But others swapped flight for diving ability. Of course, there are a great many diving birds that are still able to fly, but sometimes there is an advantage in really specialising in diving to the point that flight is no longer an option. This has, in fact, happened more than once in the course of avian evolution, but the only flightless diving birds we have now are the penguins, propelling themselves through the water with wings shaped like flippers.

Here in the UK, there have been a number of news stories about whale strandings over the past couple of months. A number of sperm whales wandered into the relatively shallow waters of the North Sea, which they do not normally visit, and became stranded at locations near Skegness in Lincolnshire and Hunstanton in Norfolk. A similar number stranded along the coast of Germany, and a few in the Netherlands and France. Unable to support their own bulk out of the water, they died of suffocation and cardiovascular collapse.

These sort of strandings are fortunately as rare as they are dramatic - part of the newsworthiness in this case was so many happened in such a short time. Fortunately, the great majority of cetacean "strandings" aren't like this at all. In most cases, the cetaceans are already dead, or nearly so, by the time they wash up. Furthermore, most of them are dolphins, simply because there are more dolphins than whales in the world, and they are also more likely to be swimming in coastal waters in the first place.

After all, every dolphin dies eventually, and the body has to go somewhere. Often, they sink, leading to the spectacular scavenger feeding frenzy of "whale fall" when a vast and blubbery carcass sinks into the depths of the deep ocean. But, especially if they happen to die close to the coast, there's every chance that the body will float for long enough to eventually wash up somewhere. It happens every now and then to humans washed overboard from ships, so, when you think about it, it's unsurprising that it happens to at least some dolphins, too.

The Size of Dead Rodents 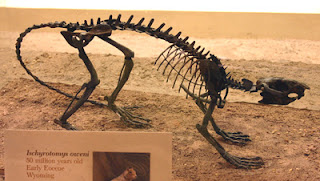 When it comes to fossil animals, there is an undeniable fascination for the largest and most dramatic of species. It's part of why dinosaurs are so much more popular in the public mind than fossil mammals. Even among dinosaurs, while creatures such as Coelophysis have their fans, there are surely many more people who would name the likes of Tyrannosaurus, Brontosaurus, or Triceratops as their "favourite dinosaur". When it comes to fossil mammals, it's the mammoths and the sabretooth cats that hold the public imagination, and we also like to hear of giant bears or mighty prehistoric rhinos.

There's nothing wrong with that, and I'd have to confess to that bias myself. (I mean, come on, who doesn't love sabretooths?) Indeed, it seems that for much of Earth's history, the largest land animals were indeed larger than their counterparts today. But, at any given point in time, the small animals always outnumber the large ones. Today, over two thirds of known mammal species are either rodents, bats, moles, or shrews, and, while the details might have changed, it seems plausible that the majority of mammals in the past were at least roughly in that size range.

Stress is, it seems, an inevitable part of life. You just can't get away from it altogether, and that applies to animals as much as it does to humans. True, they tend to get stressed out about different things, not being able to ponder the future, although it's surely true that if we were about to be attacked by, say, a man-eating tiger, we'd probably find that as stressful as mice find the presence of cats.

In fact, stress is such an integral part of life that, at a biological level, it works in more or less the same way in all vertebrates. Stress results in the release of stress hormones, of which the most important is cortisol. In mammals, this is produced in the adrenal cortex, the outer part of the adrenal glands, which sit on top of the kidneys, and produce a whole range of different hormones of which cortisol is only one. So basic is this that all non-fish vertebrates have adrenal glands of some sort, although which bits of them make the cortisol (and, in some cases, how many there are) does vary between different groups. Even fish, which usually don't have adrenal glands as such, do have the relevant sorts of tissue somewhere in the general vicinity of the kidneys, so that they too can make cortisol. It really is that universal.