The bovine subfamily can be divided into two main evolutionary branches. One consists of the truly cow-like bovines, including such things as bison, buffalo, and yak, alongside the regular domestic animal. The other are the "spiral horned antelopes", African species that, despite being more closely related to cows than (say) gazelles, nonetheless have a generally antelope-like body form. But there are two living species that fit into neither of these branches. They are relatively closely related to one another, and so form a third, much smaller, evolutionary branch (usually given the taxonomic rank of "tribe"). Although generally considered "antelopes", both species are native to Asia, unlike their spiral-horned kin.

The larger, and likely better-known, of the two is the nilgai (Boselaphus tragocamelus). Standing 120 to 140 cm (4' to 4'7") at the shoulder, although they are considered antelopes, there is a somewhat cow-like appearance to them, albeit with a much narrower head. Indeed, the scientific name reflects their somewhat odd form, since it literally translates as "cow-deer goat-camel" (in fairness, the two halves of the name were coined separately, and not used together for over 60 years afterwards). They are found throughout India, and in some neighbouring regions of Pakistan and Nepal. They have also been introduced into South Africa, Italy, Mexico, and Texas; while the Italian population died out in the 1940s, and the South African ones remain confined to their ranches, some of those in North America managed to escape, and can still be found wild in those areas today. 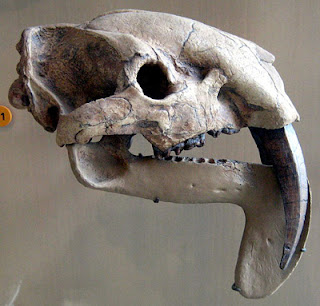 As I have described in previous posts, during the Pliocene, South America was nearing the end of a long period of isolation, having been separated from the other habitable continents for millions of years. In the very latest part of the Pliocene, it collided with North America, leading to the massive influx of northern animals known as the Great American Interchange. Until that time, many of the native animals were, to modern eyes, rather strange, evolutionary experiments, that, while evidently successful in their own right, could not compete with the invaders from the north, such as deer, llamas, bears, and big cats.

One of the oddities of pre-Interchange South America, though, was the absence of large placental mammalian carnivores. There were, as I have already noted, a few, since the raccoons somehow crossed the seas between the continents well before the rise of Central America. And, towards the end of the Pliocene, a few other animals narrowly beat the Interchange by island-hopping before the land bridge was completed. But, raccoons aside, none of the large mammalian carnivores we would associate with the continent today had yet arrived.

Mammals are by no means the only animals to give their young extended parental care, but it is a feature associated with them more than with most other animals (birds being an obvious exception). This is, in part, due to the fact that young mammals require milk to survive, and that the production of milk is one of the key defining features of mammals. The complex social lives of some mammal species, and the long maturation required for the development of features such as high intelligence are also relevant, and it's no surprise that humans have just about the longest period of juvenile development of any animal - and require significant parental care for a large part of that.

Parental care naturally involves things such as suckling the young, protecting them from predators, and so forth, and it can also include helping them to survive injury. Without the advent of first aid, this may often be ineffective, but it has been observed in a number of species. It becomes particularly dramatic - and, from a human perspective, distressing - when it is apparent that the juvenile is already dead. Here, there is no possible benefit to the young, and likely at least some apparent detriment to the mother in wasted effort, if nothing else.

Of all the many kinds of antelope found in Africa, the one that is most widespread is the bushbuck (Tragelaphus scriptus). Bushbuck are essentially found throughout the whole of sub-Saharan Africa outside of the densest parts of the Congo jungles, the Kalahari Desert, and the drier parts of the veldt and the Horn of Africa. That's a huge range; everywhere from Senegal to Angola, and from Djibouti to the Cape.

Bushbuck are the smallest of the African bovines, sufficiently so that any resemblance to cows beyond the basics true of all antelopes (horns, cloven hooves, and so on) is quite absent. Specifically, they stand 60 to 100 cm (2' to 3'3") tall at the shoulder, with the males slightly taller, and much more heavily built, than the females. They do, however, much more closely resemble their larger immediate kin, such as bongos, having a somewhat similar coat colour, and the same twisted horns that make about a single turn along their length. Unlike in bongos, however, the horns are only found in the males - a feature shared with another close relative, the swamp-dwelling sitatunga.