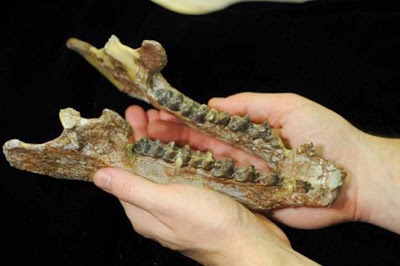 The animals of the Pleistocene epoch, of which I've given an overview over the last couple of years, are, on the whole, readily recognisable; they may look different from those today, but it's pretty obvious which modern animals they're related to. Mammoths are clearly elephants, sabretooths are clearly cats, and so on. The further we push back into the Age of Mammals, however, the less clear such things become.

There are two main problems here. One is that the animals simply look less like the ones we have today, especially if they come from a time before the modern groups separated from one another. How do we tell which modern group (if any) an animal belongs to if it lived before that group developed the characteristics that define it today? Secondly, older fossils are both rarer and more fragmentary, so that we're literally missing pieces of the puzzle. As a result, there are a number of early groups of mammal that we know existed, but which it's hard to fit into a family tree, or, indeed, to know much about at all.

How Elephants Bring the Rains 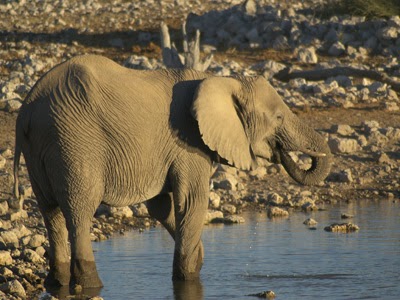 The largest species of land-dwelling animal alive today is, of course, the African bush elephant (Loxodonta africana). Especially since they're herbivores, and much of their food, such as grass, isn't terribly nutritious, they need to eat an awful lot of it to survive. Certainly not all their food is low quality, and, in fact, they'll eat just about any vegetation they can find, and they do have a digestive system that extracts more nutrition from low-calorie forage than a human one could, but even so, a full grown male has been estimated to eat about 150 kg (330 lbs) of food each day

Which isn't so bad, if you happen to live in a densely vegetated environment. The rather smaller African forest elephant (Loxodonta cyclotis) does just this, inhabiting jungles north of the Congo, but was only recognised as being a separate species in 2010. The bush elephant, while it, too, often lives in dense forest, also seems happy to inhabit less favourable habitats. For example, a significant number live in the savannah of the Serengeti in East Africa, and in similar environments. At the extreme, some live on the edges of deserts in places like Mali and Namibia.

The Mysterious Songs of the Blue Whale 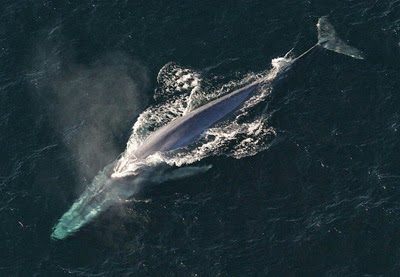 The blue whale (Balaenoptera musculus) is, as is fairly known, not only the largest animal alive today, but the largest that has ever lived. Far larger, for instance, than anything that lived during the time of the dinosaurs. Yet, because, like all whales, they are not that easy to study, they remain relatively mysterious, compared with large land-based mammals.

There, however, are a number of different ways in which we can study them, and one of them is to listen to their calls. Like other whales, blue whales produce 'songs' that travel for miles through the deep, and, by listening to them, we can get at least some idea of where they are, and how numerous they are, and perhaps further information besides.

Compared with cetaceans like the humpback whale, the songs of blue whale are not particularly complex - although they remain more so than deep clicking sounds of sperm whales. For the most part, blue whale songs consist of the same element repeated over and over. This element, termed a "Z-call" because of the shape it produces on a spectrograph, has three parts: a long, deep rumble, followed by a rapid dip and then a short, musical tone at an even deeper pitch. The first part is commonly somewhere about the A four below middle-C, which is the very lowest note than can be produced on a grand piano. The last part is about three or four notes lower than that, which is generally considered below the range of normal human hearing.

The tamarins of the Amazon jungle and the forests bordering it to the north are sometimes known as "true" tamarins, to distinguish them from their relatives further south. Even when the marmoset family was first recognised as distinct from those of other South American monkeys, and all marmosets were placed into a single genus, the tamarins were already divided into two: the "true" tamarins in the north, and the lion tamarins in the south.

More recent molecular analysis, of the sort that also showed the clear difference between the Amazonian and Atlantic Forest marmosets, has shown that our initial instinct on the tamarins was correct. Indeed, it seems to be the case that lion tamarins are actually more closely related to marmosets than they are to other tamarins, something that makes the distinction unavoidable. Having said which, there's no dispute that, anatomically, they look much more like tamarins than they do their apparently closer relatives.

What this means is that it's the tamarins, not the marmosets, that most likely resemble the original members of their family. The marmosets are specialists, having changed further from their ancestor's body form because of their heavy reliance on gum as a food source, and the need to modify their teeth, jaw muscles, and bowel structure to accommodate this odd diet. Lion tamarins, which never did that, retain the original "tusked" teeth and fruit-digesting colons of their ancestors, just as true tamarins do.