Miocene (Pt 28): Miniature Super-horses and the Dawn of the Guinea Pigs

For most of the Age of Mammals, South America was an island continent, separated from its northern counterpart by a wide sea. Even at the dawn of the Miocene, 23 million years ago, this isolation had already lasted for a long time, and the seas to the north were already a formidable barrier, with just a few islands where Central America is now. In some respects, the variation in climate across the continent was less extreme, especially because the Andes were not so high as they are today and so cast less of a rain shadow. Even so, there was enough variety that many different kinds of animals lived across its great area.

Indeed, the long separation of the continent from the rest of the world meant that it had had plenty of time to develop its own native animals. Whereas, in most of the rest of the world, animals of broad types we would still recognise were already around (early cats, deer, elephants, and so on), most of the larger animals of Early Miocene South America would have been much harder to place, since most of their descendants died out long before the Ice Ages, let alone the present. 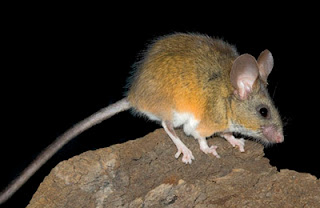 As a general rule, male mammals don't have much to do with raising their young. In many cases, that's because the species in question prefers the solitary life, and the two sexes only meet up to mate before parting ways again. In more social species, males and females may still live in different herds for most of the year, often because they have different feeding requirements and want to avoid competition. Even where are there mixed-sex groups, the males often spend more of their time fighting off rivals than they do actually looking after the young they sire - although, in this instance, they may be helping indirectly by protecting the herd from predators or the like.

But there are plenty of exceptions.

Of Pandas and Bamboo 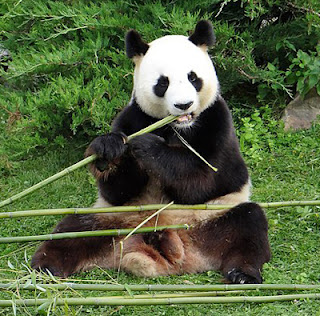 Today, there are eight living species of bear. Six of these are "ursine bears", members of a subfamily distributed across the northern hemisphere, and including the familiar brown, black, and polar bears, among others. The other two are distinct enough that modern taxonomists place each of them in their own subfamily, representing lineages that diverged from the common ancestor of the ursine bears a long time ago. One of these is the spectacled bear of South America, the last survivor of a group of American "short-faced" bears, some of which were really quite impressive.

The other, of course, is the giant panda (Ailuropoda melanoleuca).

This is a most peculiar bear. So much so, in fact, that for much of the 20th century it was unclear whether it really was a bear at all - a misunderstanding due to its similarity, and presumed close relationship to, the decidedly un-bearlike red panda. However, we now know that the two animals are not particularly close relatives and the resemblances between them are largely due to the fact that they share a similar diet.

The majority of hoofed animals living today belong to the artiodactyl order, known as the "even-toed ungulates" or, in plainer English, cloven-footed animals. This order includes such animals as deer, antelope, cattle, and pigs, as well as some of their non-hoofed relatives, such as camels. In comparison, there are relatively few living species of the perissodactyl, or "odd-toed ungulate" order, which today consists only of the horses, rhinos, and tapirs.

Yet, as so often, this group was once more diverse. Not only were there many more kinds of (for example) rhinoceros, but there were entire families of perissodactyl that are no longer with us. It is also an ancient lineage, on a par with other major groups, such as the primates. Molecular studies allow us to make some educated guesses as to when the horse-like and rhino/tapir-like perissodactyls last shared a common ancestor, and this turns out to be around 56 million years ago, at the dawn of the Eocene, not long after the non-avian dinosaurs had gone extinct. While this is just an estimate, it also happens to be not much older than the earliest identifiable fossils of the group, so there's a good chance it's fairly accurate.