Yes, it's that time of year again. This post will be current as of 1st April, and that means it's time to hand over to... birds!

The largest birds, both living and extinct, are flightless. This is hardly surprising, since being small and light is a considerable boon to anything that wants to get off the ground. Nonetheless, there are some really big birds that can, in fact, fly. Going by wingspan, rather than body weight, the largest flying bird alive today is the wandering albatross (Diomedea exulans). In second place, and also the third-heaviest of any flying bird behind a couple of species of bustard, is the Andean condor (Vultur gryphus). This has a whopping wingspan of up to 310 cm (10' 2") and North Americans probably won't be surprised to discover that the California condor (Gymnogyps californianus) isn't far behind.

The Andean and California condors are, indeed, each other's closest relatives. They are both members of the New World vulture family, which also includes such things as the widespread turkey vultures. They are distinct from the Old World vultures, which are members of the hawk family, although they're very much in the same corner of the bird family tree.

The problem with being a primate subsisting primarily on leaves is that, on their own, they aren't very nutritious. Humans on a vegan diet can hardly be expected to live on lettuce alone; they need grains, pulses, nuts and so on, and we have the advantage of cooking making much of our food easier to eat and digest. Colobus monkeys have complex digestive systems that allow them to extract more nutrition from leaves than a primate would otherwise be able to, so they have the edge over us in that respect, but they still require plenty of fresh leaves and this leads to the more exclusively folivorous ones having specific habitat requirements that leave them vulnerable to any degradation or loss of their environment.

The end result of this is that many colobine monkeys are endangered. In Africa, the most endangered group, and probably the most threatened group of primates of any kind on the continent are the red colobuses. 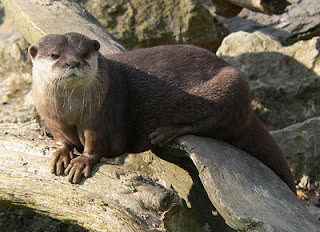 Otters are members of the weasel family, something that has been recognised since the dawn of taxonomy in 1758, when Linnaeus placed them in what was then the weasel genus (taxonomic families not yet being a concept). Their adaptations to the water, including their powerful muscular tails, were long thought significant enough that they were separated out into a distinct subfamily, a position they still retain, although it turns out that they are more closely related to the weasels proper than to some other members of the family such as, say, pine martens or wolverines.

Perhaps because rivers are a good environment for forming fossil-bearing sites, we know of a significant number of fossil otters and, most of them would doubtless have been instantly recognisable as otters were we able to see them in the flesh, there is perhaps more variety amongst them than we might at first expect. For example, a number of them are quite large - in some cases, larger even than the "giant otter" (Pteronura brasiliensis) of today's Amazon, the largest living member of the weasel family. (So, yes, it's bigger than a wolverine).

Moving Away From Home 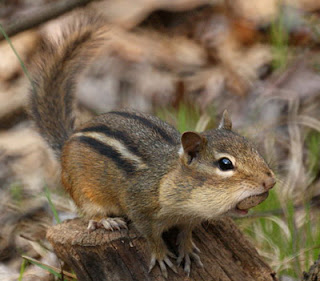 One common feature among many mammal species is that, once they become old enough to do so, they leave home to find a place to settle for themselves. Often, it's the young males that travel the furthest, and in animals that live in herds, colonies, or other groups, the females may not disperse at all, creating a matrilineal society - interestingly, the opposite is generally true in birds. This discrepancy between the sexes ensures that when the males do find somewhere to settle down, the females that will become their new neighbours or pack-mates will not also be their own sisters and other close relatives.

But there are other reasons why animals might choose to disperse, sometimes moving from one location to another once they are already adult. This may be due to some sudden disruption in their original habitat, or to longer-term effects, such as climate change. Either way, while it's not an easy subject to study in the wild, understanding the causes and practices of animal dispersal can be important for issues such as conservation and understanding wider population dynamics.