The iconic Ice Age carnivore is, of course, the sabretooth cat. However, as I mentioned when discussing the Mid Pleistocene, sabretooth cats when extinct in Europe well before the Last Ice Age. (Well, maybe not... but at any rate, they seem to have been very rare). So what were the dominant predators in Europe during that final, and most extreme, period of intense cold?

It probably depends on how small a predator you're willing to count. Animals like weasels, stoats, and shrews were presumably very numerous, even if their skeletons are often too delicate to preserve well. Moving up the scale, the most numerous carnivoran fossils from the time belong to foxes. Both the modern red fox and the Arctic fox were widespread in central Europe at the time, although the latter was presumably more comfortable.

Another modern animal that we wouldn't be surprised to find among the snowy forests and open tundra was the grey wolf. Indeed, grey wolves may well have originated in Europe from an American ancestor, before heading back over the Bering land bridge. If so, they were probably quite quick about it, since they are found across the Arctic on both sides of the Pacific from an early date.

All of these are creatures that are still found in Europe today, although not necessarily in large numbers - wolves are more common in the wilds of Asia and North America than they are in densely settled Europe. But I've been harping on through this series about how "African" European wildlife looked at the time, and that's as true of the big carnivores as it is of herbivores such as elephants/mammoths and rhinos. One of the clearest instances of this is the presence in Pleistocene Europe of lions.

Attack of the Killer Walrus (Or Not)

The two principal families of fully aquatic carnivoran are the seals and the sea lions. To the casual observer, they can most easily be distinguished by the shape of their hind limbs. Sea lions can walk on all fours (albeit with a comical waddle), while true seals have to drag themselves about on land, their hind flippers being of little use out of the water. It's this that tells us that fur seals, for example, are members of the sea lion family, and not 'true' seals. But seals and sea lions are not the only aquatic carnivorans: there are two others. Firstly, there's the sea otter, a member of the weasel family. And then there is the walrus.

Walruses are kind of weird, when you think about it. Although they're probably more closely related to sea lions than they are to true seals, they're actually neither, and the walrus family is one of those odd mammal "families" that has only one species in it. But, as is so often the case with such "monotypic " families, that's only true if you count the living species. Because there used to be more.

Part of the reason that the walrus is so obviously peculiar is that it's adapted to doing only one thing (eating shellfish) and, moreover, doing it in a fairly specific habitat. But not all prehistoric walruses were the same. Some, for example, used to live in subtropical waters, and by no means all of them fed on shellfish.

Before the Dawn Horse

Horses are surely among the most familiar large herbivorous mammals. Yet, compared with the deer and cattle families, the horse family is remarkably small. It contains only seven living species: the horse itself, three kinds of ass, and three kinds of zebra. Yet there used to be many more, and, if we include all the extinct species, the family starts to look quite large.

Indeed, the story of horse evolution, with its steady progress towards the modern animals, with only one toe on each foot, is one that's particularly familiar. With the possible exception of the line of ever-more-upright apes leading towards modern humans, the steady line of horse evolution may be one of the most well-known, and oft-repeated, images in mammalian evolution. Of course, it's not really a line, more of a bush, with multiple different kinds of horses living alongside one another, but the general pattern is accurate.

The horses either evolved from, or are very closely related to, another family of animals called the palaeotheres. These were more or less dog-sized animals, and probably had three or four toes on each foot, just as the earlies horses did. Their exact classification, and quite how they relate to horses, isn't entirely clear. That's partly because, for most of them, we don't have very complete skeletons, and there are different opinions among scientists as to which features of those skeletons are important, and which aren't.

Last of the Northern White Rhinos

The white rhino (Ceratotherium simum) is the only species of rhinoceros not considered to be at high risk of extinction any time soon. By the standards of rhinos, that's pretty good going, although it's worth noting that it's not exactly safe, either. Indeed, the current level of poaching - largely to make bogus medicines from its horns - may mean that it's status will have to be re-assessed in the next few years. But still, at least for the time being, conservation efforts mean that its population seems to be going in the right direction. But the picture may not be quite that simple.

It is, incidentally, not at all clear why this animal is called the "white" rhino. Not only is it quite manifestly grey or brownish in colour, it's not even a noticeably different shade from the black rhino. There are a number of theories for the name, but no particularly strong evidence for any of them. Perhaps some of the first individuals seen happened to have been rolling in chalky soil. Or maybe egrets had been pooing on them. Perhaps it's a corruption of the Dutch word wijd (meaning "wide"), and so-named because it has a broader, flatter, snout than the "black" species. Maybe racist European colonists thought they were less fierce than the "black" species. Or maybe... well, we just don't know. 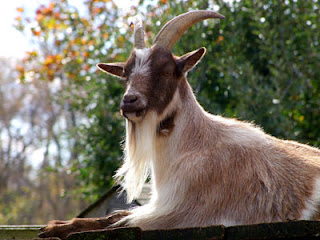 Over the last year, I completed a survey of the weasel family, the largest, and most diverse, family of carnivoran mammals. When it comes to the big herbivores, the largest and most diverse family is the Bovidae - the cattle family. This includes a wide range of animals, from the true bovines (that is, bison, yak, and so forth) to slender gazelles. In fact, there are well over a hundred species in the cattle family, and covering them in the same way that I covered the weasels would take me a couple of years or so.

So, instead, I am going to look at just one subfamily within the group. After the gazelles, it's the second largest cattle subfamily, with the bovines down in third place. These, as you'll have guessed from the title of the post, are the goats.

Or, more accurately, "caprines". Just as many members of the weasel family aren't literally weasels, many members of the goat subfamily aren't goats in the usual sense of the word. If you've never really looked at mammalian taxonomy, there will probably be at least a couple of species I'm going to cover over the coming months that will surprise you, and likely a few you've never heard of. One collective term for all of these animals is "goat-antelopes", but it's hardly common usage, and I don't actually find it very useful - not least because most of them don't look much like the regular image of an antelope, either. So I'll stick with the technical term of "caprines", or sometimes just call them goats, and you'll have to accept that I mean that in an unusually broad sense.