The Dog Family: Raccoon Dogs and the Fate of the Warrah

The Wikipedia page on the dog family includes, on its attached discussion page, a complaint that the article includes a picture of a raccoon - an animal that is clearly not part of the Canidae. Except, of course that there isn't (and wasn't then) any such picture. The complainant was looking at a picture of a raccoon dog.

It's an understandable mistake. The raccoon dog (Nyctereutes procyonoides) does look remarkably like its partial namesake. Indeed, the second half of its scientific name, first given to it by John Edward Gray in 1834, actually means "raccoon-like". The effect is achieved primarily by that dark mask over the eyes, a feature we naturally associate with raccoons, although, aside from the lack of stripes on the tail, the rest of the animal is fairly raccoon-coloured as well.

Nonetheless, it is indisputably a dog, although quite how it was related to other dogs was long a source of puzzlement. Modern studies have shown that it appears to be related to the true foxes, albeit not very closely. Its closest relative may, in fact, be the bat-eared fox of Africa, although, again, I should stress that this isn't exactly what you'd call a close relationship... just closer than anything else happens to be.

America today is not a place you associate with herds of wild elephants. Go back just a few tens of thousands of years, though, and it would have been quite a different story. The "elephants" of the time were, of course, mammoths, and they were accompanied by mastodons, animals that were not actually members of the elephant family, but which, from a modern perspective, have a pretty strong resemblance to them.

Mammoths first entered North America during the early Pleistocene, not long before the Ice Ages proper got going. They were, in their origin, Asian animals, but the mastodons were a different matter. Mastodons were already in North America when the mammoths arrived, and they had been there for a very long time indeed. For millions of years, America really was a place with herds of well... things that looked a lot like elephants, at any rate.

The creature that the American mammoths would have encountered was the American mastodon (Mammut americanum), an animal that first appeared close to the end of the Pliocene. But this was the last survivor of a much longer lineage, and there had been many more kinds of American proboscidean that lived before it, often alongside one another. In fact, only a minority of them were really mastodons, including the immediate predecessors of the American mastodon, such as Mammut raki, and the somewhat older Zygolophodon. The latter also lived in the Old World, and was likely the first mastodon to reach North America, shortly before the dawn of the Pliocene. Nonetheless, one of the best skulls we have of the animal was unearthed in California, and later mastodons of the continent are likely descended from something much like them.

Most of the living species of native dog in South America can broadly be described as "foxes", even if they are not directly related to the "true" foxes of the Old World and North America. There are, however, two exceptions, whose appearance is particularly un-fox-like. Analysis of their genes and blood chemistry shows that they do seem to be related to the South American foxes, but not very closely. Indeed, they appear to represent entirely separate colonisations of their continent, diverging from their fellows even before the crab-eating fox did much the same thing. It just so happens that their descendants in the North died out, perhaps under competition pressure from wolves and coyotes, while those in the South continued on to the present day.

The two species are, however, likely each other's closest relatives. Which is surprising when you consider how different they look.

By far the larger of the two is the maned wolf (Chrysocyon brachyurus), which is found in southern Brazil, and in neighbouring regions of Bolivia, Paraguay, Uruguay, and far northern Argentina. It is undeniably a distinctive animal, most obviously because of its remarkably long legs and slender, graceful body. Add to that its unusually long reddish-gold fur, large and mobile ears, and the black mane that runs from the nape of its neck part-way down its back, and we have something that's quite clearly a dog, but which perhaps resembles some domestic breeds more than it does any other wild species. It is also, at least in my entirely subjective opinion, the most beautiful of all the wild dogs. 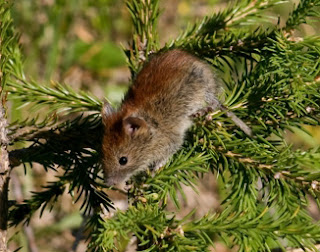 A great many species of mammal (and, of course, other creatures) live up trees, spending as much of their lives up in the branches as they can. This is true of the great majority of primates, for instance, which might travel along the ground if they have to get between two trees that aren't very close to one another, but, by and large, would prefer not to descend if they can help it.

The technical term for an animal that climbs regularly is scansorial. Not all scansorial animals are actually arboreal - that is, spending their lives in trees. Many of them live on the ground for much of the time, but will climb trees to, for example, escape from something that's chasing them. So it' perhaps not surprising that scansoriality has evolved many times, and that the physical adaptations associated with climbing are seen in many different, often relatively unrelated, mammals.

Indeed, there are good grounds to suppose that many of the earliest mammals that we know of were at least scansorial, if not fully tree-dwelling. These are the archetypal small shrew-like animals that hid in the trees out of sight the dinosaurs, just waiting for the asteroid to strike so that they could take their turn. (The reality is, of course, more complex than that - but it isn't entirely untrue, either).

Teeth of the Giant Honey Badger

Honey badgers (Mellivora capensis) have something of a reputation as particularly fierce animals. As is often the case, the reputation is somewhat exaggerated, but it isn't entirely false, either, and they are rather more purely carnivorous than the European badgers of Hufflepuff fame. They are, of course, members of the weasel family, on which I have posted at some length before, and, these days, are usually considered distinct enough to warrant their own subfamily within that group.

According to one study of the evolutionary relationships between mustelids, honey badgers represent one of the earliest branches of the weasel family tree. Assuming a relatively constant rate of genetic change between species after they diverge, and calibrating with the ages of some known fossils, the same study estimated that they should have first appeared about 11 million years ago, during the mid Miocene epoch, and probably in Asia. Naturally, for most of that time, they would not have been the same species that they are today, something that likely arrived much later - it's just that none of their closer relatives survived until the present day.