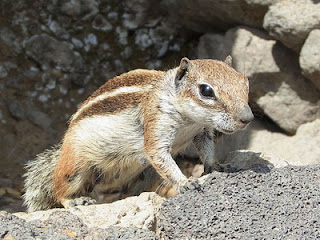 Small Cats: Servals in the Savannah, Cats in the Congo

The best-known wild cats living in Africa are, of course, the large ones: lions, leopards, and cheetahs. South of the Sahara, they are joined by two species of small cat: the African wildcat (from which the domestic animal is descended) and the black-footed cat, both of which I have already described in this series. To these, we can add the caracal, a medium-sized cat that closely resembles the lynxes of Eurasia and North America. But, although this was most likely the animal that the word 'lynx' was originally coined to describe, the caracal is not closely related to what we would now regard as the 'true' lynxes. Instead, it is part of a distinctively African lineage of similarly medium-sized cats, containing just two other living species.

The more familiar of the two is surely the serval (Leptailurus serval), an animal that is not only widespread across Africa, but that happens to be relatively easy to breed in zoos. The name apparently derives from an alternative (and now obsolete) Portuguese name for the lynx that has now replaced variants of the older English name of "tiger cat" in most non-African languages. (It's still tierboskat - literally "tiger-forest-cat" - in Afrikaans, and, unsurprisingly, languages such as Swahili had perfectly good words for it already).

Miocene (Pt 22): Last of the Creodonts

The dominant mammalian carnivores in Africa today are the lions, hyenas, and leopards, with cheetahs and wild dogs also playing their role. The ancestors of all of these creatures first reached the continent from the north, shortly after it collided with Eurasia during the Early Miocene. For the most part, at the time, their ancestors were small, with hyenas, for example, being no larger than mongooses. But this does not mean that Early  Miocene Africa had no large predators at all.

For one thing, the cats, hyenas, and so forth, were not the only carnivorous mammals to have made the crossing from Asia. The animals known as bear-dogs, or more technically, amphicyonids, are far better known from Europe, Asia, and North America, but they did reach Africa, too. 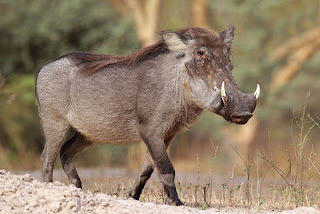