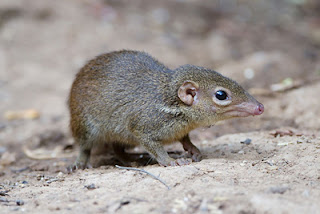 We are all familiar with the idea that, for much of the Age of Mammals, there have been large, scary cats with enormous teeth. They died out relatively recently, and as a result, we know a fair bit about them, and they remain one of the most popular prehistoric mammals with the general public - although mammoths do pretty well, too.

But, while the sabre-tooth cats stalked the world, what were the dogs like?

Perhaps the best known prehistoric dog is the dire wolf (Canis dirus). Do a google image search for "dire wolf" and you'll find far more images than you will searching for "sabre tooth", let alone something more specific like "Smilodon". But a look through those images gives you some idea why, and it doesn't have much to do with real-world fossils. The term "dire wolf" has been co-opted by fantasy fiction and games, and many of the pictures show the animals as they appear in Dungeons & Dragons, World of Warcraft, or Game of Thrones. They are generally portrayed as immense wolves, at least the size of a small horse, and sometimes with sabre teeth of their own, or bizarre spikes on their bodies.

Weasels in Warm Rivers: Otters of the Tropics and the South

The body plan of otters is evidently a successful one in evolutionary terms. While the two species of "common otter" are the only ones inhabiting the rivers of the northern temperate zone, there are at least ten species in other parts of the world, and most of them look remarkably similar. They all have long, sinuous, bodies with short legs and webbed feet. Their tails, quite unlike the slender or stumpy appendages of other members of the weasel family, are powerful and muscular, and somewhat flattened to better help propel them through the water when swimming. Their fur is dense and, in most cases, short and sleek.

Furthermore, they are all more or less the same colour. Otters, of all species, are brown over most of their body, and they usually have paler underparts with a particularly noticeable patch of pale fur on the chest, which may extend up onto the chin. Compared with the variety of weasels, or even martens, the visible differences between most species of otter can be subtle, and it's hard tell them some of them apart.

The closest living relative of the familiar Eurasian otter is the hairy-nosed otter (Lutra sumatrana) of South East Asia and western Indonesia; the two species probably diverged during the early Ice Ages. It is also a highly endangered species, and, combined with its remote jungle location, that means we know relatively little about it. This story of threats to otters is, sadly, one I'll come back to a lot in this post. Of all the members of the weasel family, the otters are the ones most at risk, probably because their riverine habitat makes them particularly susceptible to pollution, and may also make them easier to hunt for their valuable fur.

Battle of the Sabretooths

The cat family is divided into two living subfamilies. One group are the pantherines, or large cats, which include lions, tigers, jaguars, and the various kinds of leopard. The other are the felines (which means that, in the technical, scientific sense, lions are not felines - the correct collective term that includes all members of the cat family is "felid"). The felines are quite variable in size, from cougars and cheetahs at the high end, through a range of mid-sized cats such as lynxes and ocelots, down to wildcats and their familiar domestic relatives.

But there once used to be a third subfamily of cats, and they represent, with the possible exception of mammoths, what are probably the most widely known of all extinct mammals. In fact, I'd guess that they are the only extinct mammals that come at all close to dinosaurs in terms of popularity. I refer, of course, to the sabretooth cats.

Chances are, especially if you're American, the sabre-tooth cat you've heard most about is Smilodon. This is actually three different species of cat, albeit very closely related. The largest was about the size of a lion, but with a short tail, like a bobcat. They used to live in both North and South America, and died out only around 10,000 years ago, perhaps not coincidentally shortly after humans became numerous on those continents. (Not, one assumes, that humans would have hunted Smilodon themselves - but they may well have eaten much of the cats' preferred prey).