Pliocene (Pt 6): Attack of the Hyenas

Pliocene Europe was a continent as yet untouched by human hand - although, as I've noted, not of non-human primates. One might think that, in the absence of humans, sabretooth cats were probably the thing that other animals had to fear the most. There's probably a lot of truth in that, but they were far from the only carnivores in Europe at the time, and some of them were pretty fearsome.

On the other hand, there were also much smaller carnivores, too. At the bottom of the scale, weasels, badgers, otters, and martens already existed on the continent, and may have been quite common in the forests of the time. Foxes also survived the Zanclean Flood, and have continued living in Europe, right through the Ice Ages, up to the present day. In fact, Pliocene foxes would have looked remarkably similar to those of today, and are generally placed within the same genus, Vulpes.

Similarly, the largest carnivores of the European Pliocene would also have looked familiar. These were the bears, dominated by the gianr Agriotherium, which may have been slightly larger than a modern polar bear. Another woodland creature, it had perhaps been more common in the previous epoch, but survived throughout almost the whole of the Pliocene, dying out not long before the Ice Ages began in earnest. 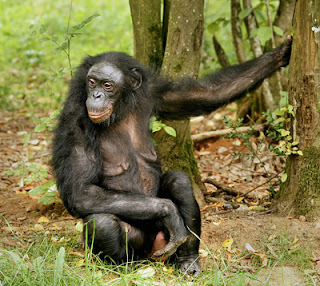 There are two species of chimpanzee currently recognised. Until recently, the common chimpanzee (Pan troglodytes) was by far the better known of the two. Today, it's probably fair to say, though, that the other species, the pygmy chimpanzee or bonobo (Pan pansicus), is well-known enough that when people say "chimpanzee" they often mean "as opposed to a bonobo", rather than referring to both species collectively. For clarity, I'm going to use the more specific term of "common chimp" for P. troglodytes in this post.

At any rate, being very closely related, the two species have a lot in common. (Neither, incidentally, is closer to humans than the other, in much the same way that if your aunt has two children, neither of those children is more closely related to you than the other). But there are also striking differences, particularly in the way that they interact with one another socially. A recent study, for example, shows that bonobos make eye contact with one another more frequently than common chimps do with their own kind. This is the sort of finding we would expect for an animal where social cooperation and coordination are all-important; in contrast, common chimps are more likely to focus on the mouth, and on whatever object their fellow is currently interested in himself.

Bats in the City

Many mammal species change the environment around them to suit themselves, whether it be by digging burrows or building beaver dams. Yet none has had an effect even close to that of humanity. Sometimes we reclaim land from the sea, or flood valleys to make reservoirs, but we also chop down trees to make room for agricultural land, and divide natural habitats with roads and railways. Arguably the most dramatic alteration we make to the landscape, however, is the construction of urban areas - an entirely new kind of habitat, unknown on Earth before our arrival.

Urban areas, are not, of course, entirely devoid of animal life. Many animals wander into the peripheries, and sometimes even into the centres, of our towns and cities. A general term for such animals used to be synurbic, but, over the last few years, this term has become more precisely defined, not to mean just any wild animal that is happy to live in urban environments, but those that actually prefer to do so. That is, there are more of them per unit area in cities than there are in the wild.

The Dog Family: Foxes of the American West

There are six living species of fox native to the North American continent. One of those is the red fox, which is also found through much of Asia and Europe. Three others, including the grey fox of the southern US, are not traditionally considered to belong to the genus Vulpes, and I will be returning to these at a later date. Which leaves two close relatives of the red fox that are unique to the continent. Both, as it happens, live out in the wilds of the American West.

Heading out into the west, the first of these two species we come to is the swift fox (Vulpes velox). The native range of this animal happens to line pretty up well with a series of interstate borders, and it's found from northwestern Texas/eastern New Mexico in the south to western South Dakota/eastern Wyoming in the north.

As one might imagine, given this area, they like flat, wide open short grass prairie, and apparently avoid everything else, although they don't seem to have a great problem with cropland. They are small foxes, standing only about 30 cm (one foot) high, similar in height to a small terrier or a King Charles spaniel, although, due to a slim build, they are also considerably lighter than those dog breeds. During the winter, they have a dark grizzled grey back with tan markings on the flanks and legs, but, aside from the black tip to the tail and the pale belly, the whole animal takes on a browner hue in the summer, when it sheds its thick pelt.