When the Pleistocene began, Europe's climate was much the same as it is today, and the general shape of the continent would also have been instantly recognisable from space. The animals however, were different, many of them being ones we would now associate with Africa - rhinos, elephants, hyenas, and cheetahs, among others. In part 2, I described how that began to change 1.8 million years ago (which, incidentally, was once defined as the beginning of the Pleistocene - see part 1 for why that changed).

This was a time of cooler weather, as the Ice Ages began to dawn. Forests retreated in the face of advancing tundra, and musk oxen, bison, and (strangely) European hippos began to make their appearance. The cold snap was prolonged, and, so far as we can tell, the fauna of Europe remained relatively stable for the next 600,000 years. That's still a very long time - if we go back to my analogy where we get just one minute to watch the events of a decade, with the whole of written history thereby spread out into a nine hour spectacular, this phase of European history would last a full six weeks.

1.2 million years ago, half way through the Pleistocene, the climate changed again, and mammals (and other animals) were forced to adapt. However, the change wasn't towards yet colder weather, but back towards a warmer, more pleasant climate. The forests grew back, with all their dense undergrowth in attendance, and the harsh steppe-lands retreated into the north. As had been the case at the dawn of the Pleistocene, European weather would have been much as it is now. 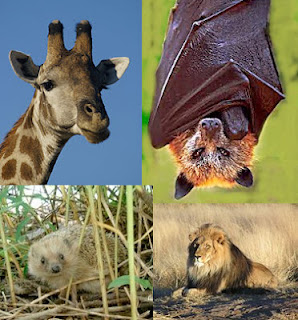 This is the 100th post on Synapsida. Granted, that's counting the introductory post, which didn't really say much, but it's far easier to keep track of that way. Synapsida started in October 2010, initially with around 2 or 3 hits a day, and currently tends to get around 80. Not the most successful blog in the history of the internet, then, or even of science blogging, but hardly a disaster, either.

In that time, I've covered a wide range of mammalian topics, although there's still a number I believe haven't yet had a fair shake. The subject I've written most about turns out to be reproduction, followed, more generally, by animal behaviour. These are topics there's a lot to say about, and there's plenty of research ongoing, as well as being easier to make interesting than, say, the diversity of nitrogen isotopes in reindeer. Still, I'd like to do a bit more on morphology - the general shapes and anatomy of animals, and how that differs between groups.

I've covered members of 33 different families of mammals in the main articles, and so far, I've generally not gone into detail on any given species more than once. Still, some types of mammals have definitely featured more frequently than others. Aside from the obvious, the most commonly mentioned family of mammals turns out to be the dogs, followed by the bears. In general, carnivorous mammals have got the most airtime, but there are also a number of posts on marsupials, bats, primates, and cetaceans, among others.

Mating in the Rain

Humans have no defined breeding season, remaining sexually active throughout the year. This is relatively unusual among large mammal species, especially in temperate regions (although it's worth remembering that our species is originally from the tropics). That's at least partly because mating in humans also serves a social function, helping to bind individuals together. We see something very similar in bonobos, but most large mammal species do have a defined time of the year when the females come into heat, and mating begins.

The reason for this is to ensure that the young are born at an appropriate time of year, when food is most plentiful. That's particularly important in temperate regions, because there's inevitably going to be a shortage of food in the winter. However, the picture can become more blurred as we move towards the tropics, and when we look at smaller mammals.

The issue in the tropics is that there is no winter, and temperatures don't change radically throughout the year. However, due to the complex nature of climactic weather systems, even in the tropics, there is usually a rainy season and a dry season. While the jungles of Southeast Asia, for example, are never going to be as short on food in the dry season as Canada is in the depths of winter, there is still a notable difference. For example, flowers and fruit may be more available in the wet season, as may fresh growths of new plants. Even for carnivores, that's helpful, because the animals you're feeding on are plumper and more numerous when there's more tasty plants around. So, many species time their breeding so that births occur during the rainy season.

Weasels in Burrows: the 'True' Badgers

The word 'badger' has been applied to a number of species of stocky, moderately sized, members of the weasel family, that are not necessarily all closely related to one another. That's not due to any sort of carelessness with the names, because, for a long time, it was thought that they were closely related.

It's hardly an unreasonable conclusion, because they do look strikingly similar to one another, even to the extent of having similar coat markings. Modern genetic analysis, however, has shown that they are rather more different from one another than appears at first glance. Indeed, one group of 'badgers' - the stink badgers - turned out not to belong to the weasel family at all, but, instead, to the skunk family.

The stink badgers are obviously beyond the scope of this series on mustelids, but the various other species are not. The remaining badgers, however, still do not constitute a single group within the weasel family, as was once thought. That's because they don't have a single ancestor from which all other badgers - and crucially, nothing but badgers - are descended. All badgers are related, because everything is related, if only you go back far enough, but they're often more closely related to other animals than they are to each other.