There are not many animals that eat bats. Or, at least, that's often been the received wisdom. Bats only come out at night, fly through the air, where it's difficult to catch them, and many spend the day sheltering in caves that are difficult to access, and that rapidly become filled with so much bat poo that not much else is willing to venture within. But they don't all live in caves, they aren't the only things that come out at night, and, anyway, there's just an awful lot of them, so surely something must, in fact, eat them?

And, of course, the answer is "yes". In fact, there are actually quite a lot of animals that eat bats from time to time. In Brazil, for instance, snakes, especially tree-dwelling constrictors, have been reported to prey on bats. So do other vertebrates, from fish to mammals, and even a few invertebrates, such as, yes, really - giant centipedes. But, considering all that flying they do, it's perhaps unsurprising that the main predators of bats are, in fact, birds. And, among the birds, it's doubtless also not a great shock to discover that owls are the primary culprits.

For instance, it has been estimated that in Britain, at least 11% of all bat deaths (and probably more than that) are caused by birds. Around three quarters of those attacks are by tawny owls (Strix aluco), and 90% of all predation incidents on bats in Britain are due to owls of some kind. With 5% of predation incidents having nothing to do with birds at all, it nonetheless follows that a further 5% must be due to birds that aren't owls... and, of course, this is just Britain, where (for example) tree-roosting bats are quite rare.

Bovines: Will the Real Buffaloes Please Stand Up?

Outside of North America, the term "buffalo" refers not to the bison, but to two (or more) species of bovine native to Africa and Asia. In the wild, by far the more common of the two is the African buffalo (Syncerus caffer), which has the distinction of being the only non-domesticated species of truly cow-like bovine that isn't even slightly endangered.

African buffalo are very numerous, and found across wide swathes of Africa south of the Sahara. This includes a fair number of different habitats, and African buffalo vary not just in their habits and preferences, but in their physical appearance, across that range. They were first described scientifically by Swedish naturalist Anders Sparrman in 1779, based on an animal found at Algoa Bay, near present-day Port Elizabeth in South Africa. Given the association with that general part of the world, the alternative name of "Cape buffalo" is often used for the animal, although that seems a little restrictive for something so widespread to me.

At any rate, over the next century and a half, scientists racked up descriptions of an impressive number of subspecies - by 1913, at least 21 were recognised. In the hundred years since, that number has steadily declined as it has become clear just how tiny the differences between some of them were. Even now, the question isn't entirely settled. There is agreement that there at least three subspecies, but there might be more, and it has been also been argued that some of them are genetically distinct enough to be full species in their own right.

Pliocene (Pt 11): A Profusion of Pigs 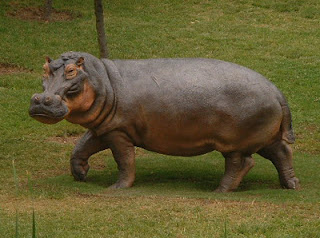 Probably the most numerous large mammals in Africa today are the antelopes, of which there are a great many species. In this respect, the Pliocene was not much different, with antelopes providing a large part of the diet of the various carnivores that lived before the Ice Ages, from lions and hyenas to sabretooth cats. However, the mix of antelope species was different then that it is now, not least because of the generally lusher environment that existed in Africa during the earlier part of the epoch.

Even so, most of the antelopes of the day were related to species that we would recognise today. For example, even at the very beginning of the epoch, around 5 million years ago, South Africa boasted a gazelle similar in size to a modern springbok. Indeed, springboks proper appeared around 3 million years ago in the same general locality, where they were represented by at least two extinct species until one of them (probably Antidorcas recki) evolved into the iconic modern animal.

The gazelles of the early Pliocene were likely different in their habits from the modern sort, being more adapted to woodland than open plains, but, moreover, they were not as common, comparatively speaking, as they are now. Instead, it appears that, at least in East Africa, a group known as the spiral-horned antelopes (about which I will have a lot to say elsewhere on this blog over the coming months) were rather more numerous. 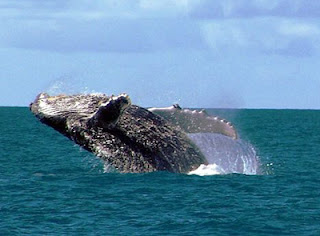 Birds are by no means the only animals to make lengthy annual migrations. While most annual migrations by mammals are of the relatively short-distance kind - moving down the side of a mountain as winter approaches, say - some can be surprisingly impressive. To travel a truly long distance, walking is generally not your best bet, so most mammals that do so are not the kind that would travel overland. Given their parallels with birds, perhaps the most obvious mammalian examples are bats. While most sleep away the insect-free winter in a cave, some bats do travel long distances. As just one example, straw-coloured fruit bats (Eidolon helvum) have been reported to travel up to 2,500 km between Congo-Kinshasa and Zambia in search of the best ripe fruit in any given season.

Which isn't up there with the most impressive of the migrating birds, by any means, but isn't exactly a short hop, either. And, if you can't fly, swimming is another option. Indeed, one of the mammalian species that migrates the furthest is the humpback whale (Megaptera novaeangliae), with migrations of up to 10,000 km having been reported.

Humpback whales are, in fact, found just about everywhere on Earth that's covered by seawater, excepting only the Arctic Ocean and some smaller seas with restricted physical access (such as the Mediterranean). Different populations, therefore, can migrate along very different routes. But the pattern is generally the same: they spend the summer in cold waters, where they stuff themselves with krill, and then head towards warmer climes as the winter sets in, giving birth and raising their young over the summer before returning to their feeding grounds.