All the World's Deer: A History of the Deer Family

Over the past year, I have described no less than 53 living species of deer, seven of which are currently considered endangered and one of which, bar a few park escapes, exists only in captivity. And that's excluding Schomburgk's deer which. as I noted, probably went extinct in 1938, and certainly didn't last long beyond that if it didn't. It's the only known species of deer to have gone extinct for centuries, although it might not be the last to do so. But there are, unsurprisingly, given their large size and distinctive features, a great number of extinct fossil species of deer that we know about.

Further along in this blog I have posted a summary of the family tree of the living species of deer. This is derived from molecular and genetic studies, but it turns out to map reasonably well to what we would have guessed purely from looking at the animals and their skeletons, which is good news if we want to try and place fossil deer into it. The first thing that's apparent from the tree is that, as predicted back in the 19th century, there is a deep split within it, representing the two subfamilies: the cervines (at the top in the diagram) and the capreolines.

Among the distinguishing features of mammals, as compared with other vertebrates are the larger relative size and greater structural complexity of the brain. It's worth pointing out at the outset that many birds are as capable as mammals of complex behaviour despite not possessing the brain structures we'd otherwise associate with such things so that we can't solely use brain anatomy as a proxy for things like 'intelligence'. But, if we're looking only at mammals, brain anatomy can tell us quite a bit and it's probably fair to say that it does distinguish us from, say, reptiles.
Read more »
Posted by JK Revell at 17:43 No comments: 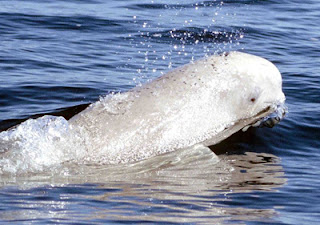 Dolphins and porpoises are well-known for using biosonar to navigate their way around and detect the fish on which they feed. There are a large number of different dolphin species, with well over 30 in the Oceanic dolphin family alone, which includes not only the regular-sized species but also much larger "dolphins" such as the killer whale. Given this physical variety, and the variation in habitats between the different species, it's unsurprising that there are also many variations in the exact details of the sounds they emit and how they use them.

Much of this variation seems to date from the Middle to Late Miocene when both dolphins and porpoises underwent a rapid increase in the number of known species. This may be related to the loss of the connection between the Mediterranean and the Indian Ocean, creating a change in the worldwide circulation of water and corresponding changes in the habitats available to these animals, allowing them to exploit new opportunities.

All the World's Deer: The Largest Deer and Other Oddities

It will probably come as no surprise that the largest species of deer alive today is the moose (Alces alces), confusingly known as the "elk" in some parts of Europe. The latter is, of course, the original English name for the animal, and remains, more or less, the name for it in languages such as German and Swedish today. The word "moose" comes from one or more of the Algonquian languages and entered English no later than the 17th century, although why Europeans chose to rename the animal they already knew about rather than come up with a new name for the novel American beast that looked like a red deer is unclear.

At any rate, moose are undeniably large, considerably larger than the American elk. They typically stand around 200 cm (6' 6") at the shoulder, with females not much shorter than males. The males are, however, significantly bulkier and more muscular, with a full-grown bull typically weighing between 300 and 600 kg (660 to 1300 lbs) and females around 25% less. The occasional exceptional individual can, of course, be much larger than this but, even ignoring those, that's pretty big for a deer.