Out of Tibet - Origins of the First Sheep

Sheep, as I have noted before, are members of the goat subfamily within the much larger group of the bovids. They are, in essence, a special kind of goat that has adapted to living in the foothills of higher mountains, rather than on the steeps-sided peaks themselves. The exact number of species of sheep is debatable, but there are at least five wild ones, plus the domestic animal, for a total of six.

When I discussed the evolutionary history of the goat subfamily a few years back, I talked primarily about the goats themselves, and about the muskoxen, and said very little about how the sheep became separated from the goats, and how they evolved since. A new paper, however, goes into much more detail about the origin of sheep and their fossil history. It is, in fairness, based on just one pair of fossilised horns, but, nonetheless, this is as good a starting point as any, and a sound excuse for me to summarise what we do know about sheep evolution.

Invasion of the Fire Ants 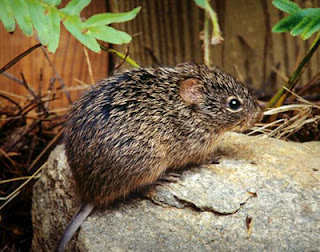 Small, herbivorous mammals have a hard time of it when it comes to being attacked by larger carnivorous ones. Life expectancies are generally short in the wild, counter-balanced by the ability of most animals to breed like... well, rabbits. Many of their behavioural traits are also shaped by the need to avoid being eaten, including, not just general watchfulness, but trying to do things like foraging where (or when) predators are least likely to be a problem.

On the other hand, predators naturally have an interest in getting round this problem, and the result is a never-ending battle between the habits and skills of predators and prey alike. Over the course of thousands of years, this settles into a sort of equilibrium, changing perhaps only as new species evolve and as the geography or climate change on even longer time scales. Unless, of course, we humans get involved.

Humans can mess up the balance of life among wild animals in quite a number of ways, but the one we're concerned with today is that of invasive species. We purposefully carry species from one part of the world to others, especially when it comes to domesticated animals. Pre-Columbian America had no cows, no domestic sheep (although, of course, two native wild species), no pigs, and no horses or cats. There were dogs, but only because humans had brought them across much earlier. The introduction of all of these animals, and the changes in land use required to support them, have had significant effects on the local wildlife in at least some parts of America, and that's before we include animals deliberately introduced for other reasons, such as fur-farming or hunting, never mind those that we didn't introduce purposefully at all, such as rats.

Whispering Bats on the Hunt for Nectar

There are likely three things that most of us think of when we think of bats: they fly, they're nocturnal, and they can echolocate using inbuilt sonar. In fact, only the first of these is universally true of bats; there are (and never have been, so far as we can tell) any flightless bats in the way that there are flightless birds. The other two statements, while broadly correct, are not absolutely true of all living bat species.

Indeed, the bats are the second largest order of mammals, in terms of number of species, after the rodents. This, as might be expected, leads to a remarkable variety in their habits and ecology, even if much of it is not immediately obvious to the layman. There are, under the most common present scheme, no less than nineteen different families of bat, and while many other mammal families have names that can easily be rendered in regular English ("cats", "deer", "marmosets", and so on), those of bats are have to rely on more obscure terms ("funnel-eared bats", "sheath-tailed bats", etc.)

Bovines: Bongos in the Jungle

Broadly speaking, the more cow-like bovine species tend to be found wild in forested habitats, often with quite dense foliage. In contrast, the antelope-like bovines tend to prefer more open wooded country or scrubland. But these are both very crude generalisations. Plains bison and yak, for example, both live in open terrain, and, on the other side of the coin, there are bovine antelopes that prefer forest to savannah.

Among these is the bongo (Tragelaphus eurycerus), which can be found in three, entirely separate, regions of equatorial Africa. The two main populations live along the southern coast of West Africa, from Guinea to Benin, and across the heart of the Congo Basin and surrounding jungles, from Cameroon and Gabon in the west almost to the Ugandan border in the east. The vast majority of bongos live in these two areas, which are nonetheless separated by over 1,000 km (620 miles) of intervening land (much of which is Nigeria). The third population is found only in a couple of tiny mountain refuges in Kenya, where they cling to the forested slopes, migrating up and down them each year as the weather changes.

For most of the Pliocene, South America was an island continent. Over the millions of years of its isolation, it had evolved some strange forms of mammal unknown elsewhere. Some, such as the anteaters, armadillos, and sloths, survived the continent's eventual collision with its northern counterparts; most did not. A time traveller visiting the continent during this epoch would find much that was vaguely familiar, to be sure - there were monkeys, rodents, and bats, for example - but also much that was not. This is especially true when it comes to the larger animals of the day.

Even today, South America has no antelopes, zebras, or native goats; the role of "large hoofed herbivore" is taken jointly by deer and by llamas and their kin. Both are introductions from the north, arriving only after the rise of the Panamanian Isthmus in the very latest part of the Pliocene. Their appearance did not spell immediate doom for the native hoofed animals, some of which struggled on until the arrival of humans at the end of the last Ice Age, but the end result was the same, and they are all long extinct.