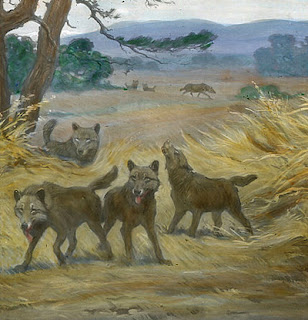 I have previously discussed the dire wolves of Pleistocene North America, but really only in the context of how even earlier dogs were much scarier. Those earlier, bone-crushing, dogs were still around in the early Pleistocene, but they didn't survive the early Ice Ages, possibly because they were too specialised to cope as the climate changed. The dire wolf, on the other hand, first appeared at around this time, and survived long enough to live alongside humans.

The dire wolf (Canis dirus) was a very close relative of the grey wolf that we're all familiar with today. Grey wolves, despite their broad modern distribution, first evolved in Europe and Asia. Indeed, the sudden appearance of the Etruscan wolf (Canis etruscus), thought to be a direct ancestor of the living wolf, in the so-called "Wolf Event" shortly before the dawn of the Pleistocene, had a dramatic effect on European wildlife. Modern wolves, however, while widespread in the Old World, did not enter the Americas until surprisingly late, and did not travel south of the Canadian Arctic until the Ice Ages were almost over, around 0.1 million years ago.

Dire wolves, however, were there much earlier. So where did they come from? Although there was some suggestion back in the 1980s that they were actually South American in origin, the more modern consensus is that they were native to the northern continent. The most popular theory seems to be that dire wolves evolved from Armbruster's wolf (Canis armbrusteri). In fact, the latter continued to survive in its original form alongside its descendant until about 0.3 million years ago, although it does appear to have been steadily pushed eastward and southward during this time.

One of the defining features of mammals is that they're warm-blooded - at least, when they're not hibernating. The only other living creatures that are truly warm-blooded are the birds... but what exactly do we mean by 'warm-blooded', anyway?

It's not the actual temperature of the blood that's relevant, here. The blood of a "cold-blooded" animal, such as a lizard, is, after all, pretty warm when it's basking in the sun. (Which is, in fact, why they bask in the sun in the first place). It's because of that that "warm-blooded" isn't the preferred term among scientists. Back when I was school I was told that the correct word was homoeothermic, but today, when we're talking about mammals and birds, the preferred term is endothermic. The two words don't mean quite the same thing, and it's actually possible for an animal to be one without being the other.

"Homoeothermy" means that the animal is able to keep a constant body temperature, largely regardless of what the environment around it is doing. Get too hot, and you find some way to cool down, and get too cold and you warm up somehow. There are a very small number of non-hibernating mammals that aren't homoeothermic. Naked mole rats are the clearest example; because they live in underground tunnels where the temperature doesn't change much, they've lost the ability to compensate if it ever does change. It's just not a problem they face, and it may be part of the reason why they don't have any fur - they don't need to keep their body heat in.

There are at least two ways for an animal to become homoeothermic. One of them is just to be enormous. Large objects lose heat slowly, so, perhaps with the aid of a few behavioural modifications, a really big animal can keep warm through a cold night simply because the night isn't long enough to have an effect on it. This probably won't work through a long winter, and the animal also takes a long time to heat up (though the latter might be an advantage in the noon-day sun), but, for many purposes, it may well be enough. This sort of homoeothermy isn't really relevant to mammals, but it may well have played a role in the lives of the really big dinosaurs like Diplodocus.

Hold On to Your Nuts

The squirrel family is a particularly large one, with almost 300 recognised species. About half of these are ground squirrels of various kinds, including such animals as prairie dogs and marmots. The remainder are tree squirrels, which can be found on every tree-bearing continent bar Australia. Tree squirrels aren't a single group in evolutionary terms, because chipmunks are closer to marmots than to, say, fox squirrels, but they do at least have a fair bit in common.

Life for tree squirrels isn't too bad if they happen to live in the tropics, where trees provide abundant food year round. (The Indian palm squirrel has the added advantage of being a sacred animal in Hinduism, but that's another matter). It's all a bit tougher when they live somewhere with proper winters. By and large, tree squirrels don't hibernate - although many ground squirrels do - which means that those in the north need some way to keep eating throughout the year.

The solution for many, as is well known, is to hide nuts, seeds, and other easily preserved food sources in caches, and return to them when the weather gets bad. This can be important in seed dispersal, should the squirrel forget where it put the hoard, or die from some other cause before it can eat it all.

In Britain, the native tree squirrel, and, indeed, the only native squirrel of any kind, is the red squirrel (Sciurus vulgaris). Since the 1870s, however, it has been under increasing pressure from larger, foreign squirrels introduced from the United States. These are eastern grey squirrels (Sciurus carolinensis), simply called "grey squirrels" in Britain, on the grounds that there's no other sort. Over the last 140 years or so, they have almost entirely extirpated red squirrels from England and made a good start on Wales and Ireland, too.

Caprines of the Distant Past

Having said something about all the living species of goat-like animal, it's time to wrap up with a review of where they all came from. Although fossil goats have not received the attention of sabre-tooth cats, let alone dinosaurs, we do have a number of remains, especially from the most recent epoch before today, the Pleistocene. Goats, after all, are reasonably sized animals, and both sexes have prominent horns, which can help to make them distinctive.

Indeed, goats and their kin seem to have done rather well during the Ice Ages of the Pleistocene. Because they are well-adapted to harsh and cold environments, vast ice sheets covering the north were less of a problem for them than for many other animals. They could not, of course, live on the ice sheets themselves, but then very little could. But with most of the rest of Europe, and large swathes of Asia and North America, covered in chilly tundra, that was as good a place for goats as mountainous plateaus are today.

It perhaps particularly suited muskoxen, which, unlike true goats, prefer lowlands rather than precipitous mountains. Even today they are found on the chilly tundra plains of Siberia and Canada and the coasts of Alaska and Greenland. During the Ice Ages, such terrain stretched further south, and (the world being a globe, and continental masses being where they are) that meant there was more of it. That muskoxen are exceptionally large by the standards of "goats" means that they also left some pretty big and impressive skeletons.

Spanish Painted Dogs (and What They Can Tell Us) 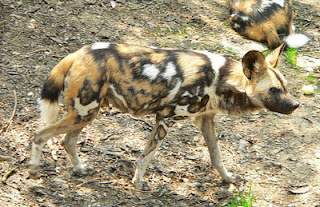 Members of the dog family can be broadly divided into two groups. One goup are the vulpines, including such familiar animals as the red fox and its Arctic relative. The other are the true canines, a rather more diverse group found wild on every continent bar Antarctica. While species in the first group are all basically fox-like, those in the latter are not necessarily "wolf-like". Indeed, the second group includes the zorros, or South American foxes, which descend from a more wolf-like animal that nipped south when the two American continents collided.

Still, the second group does include animals that are more obviously wolf-like, such as the wolves themselves, along with coyotes, jackals, dingos, and so on. But there are also a number of species that are more distinctive, and while (in most cases) clearly dogs of some kind, aren't that much like our normal ideas of either wolves or foxes.