Caprines of the Distant Past

Having said something about all the living species of goat-like animal, it's time to wrap up with a review of where they all came from. Although fossil goats have not received the attention of sabre-tooth cats, let alone dinosaurs, we do have a number of remains, especially from the most recent epoch before today, the Pleistocene. Goats, after all, are reasonably sized animals, and both sexes have prominent horns, which can help to make them distinctive.

Indeed, goats and their kin seem to have done rather well during the Ice Ages of the Pleistocene. Because they are well-adapted to harsh and cold environments, vast ice sheets covering the north were less of a problem for them than for many other animals. They could not, of course, live on the ice sheets themselves, but then very little could. But with most of the rest of Europe, and large swathes of Asia and North America, covered in chilly tundra, that was as good a place for goats as mountainous plateaus are today.

It perhaps particularly suited muskoxen, which, unlike true goats, prefer lowlands rather than precipitous mountains. Even today they are found on the chilly tundra plains of Siberia and Canada and the coasts of Alaska and Greenland. During the Ice Ages, such terrain stretched further south, and (the world being a globe, and continental masses being where they are) that meant there was more of it. That muskoxen are exceptionally large by the standards of "goats" means that they also left some pretty big and impressive skeletons.

While the modern muskox evolved relatively recently, there were many more species during the mid to late Pleistocene than there are today. In Asia and Europe, we had Soergelia, which lived alongside sabretooths, and which also made some inroads into North America. Also known from all three continents, although especially from Europe is Praeovibos, likely the direct ancestor of the modern species. Indeed, analysis of DNA recently recovered from their bones suggests that they may be so similar that they don't even count as a separate species from living muskoxen, let alone a separate genus.

North America, however, also had its own, unique, muskoxen, and the DNA studies that have been performed on some of their more recent fossils show that they certainly were distinct. Bootherium bombifrons, sometimes called Harlan's muskox, after its discoverer, is just one of two native American muskoxen. Compared with living muskoxen, it was taller and somewhat more slender. Since the heavy build of the modern muskox is largely a defence against the cold, this would suggest that they preferred warmer climes than their living kin.

The fossils support this contention. Certainly, there are fossil Bootherium from places such as Alaska and western Canada, but they are more common further south, and reached at least as far as Texas. Well-preserved remains from Alaska go as far as to show that Bootherium seems to have had dark hair, and that it fed on grasses and the occasional shrub, much as muskoxen do today. It was once thought that another, rather similar species, Symbos cavifrons, lived in the same area at around the same time, distinguished by a different shape to the horns, among other features. It is now generally agreed, however, that they aren't different at all: Symbos, it turns out, were simply female Bootherium!

Rather more clearly distinct was the shrub-ox, Euceratherium collinum. This was the animal that dominated the plains of North America before the bison arrived, and, unlike bison, they evolved on that continent, and never left. These were, perhaps, the largest caprines ever, being significantly larger than living muskoxen, albeit still smaller than, say, a bison. Like Bootherium, they were widespread, being found through much of the continent, from Iowa to central Mexico. Fossilised dung uncovered in Utah indicates that they ate foliage from shrubs and trees more than they did grasses, with (at least in that area) a preference for acacia, oak, and sagebrush.

Still, if the Pleistocene was a good time for caprines, and for muskoxen in particular, we have to look back much further to discover the true origin of the group. The first caprines date to the mid to late Miocene, two epochs before the coming of the first Ice Ages. To try and build up a picture of what happened since that time, our best bet is to look at the genetics of living species, and analyse what happened when. 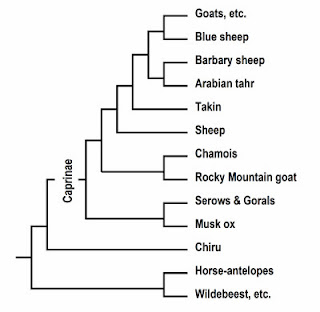 Attempts at building up these "molecular phylogenies" for caprines have not yielded entirely consistent results. I have used a number of such studies to compile the cladogram given here on the right, but even so, it has involved a fair bit of guesswork and extrapolation, and I'm not making any claims that it's 100% right. Certainly, it doesn't exactly match any one study, and it can't be said to be any more than my own best guess from the available data. You can see somebody else's attempt here, and the original papers that I used are, as always, cited at the end of this post.

There are some things that we can broadly agree on, though. The goats proper (including ibex, turs, and markhor) form a distinct group of their own. They are widespread in Asia and northern Africa, and and probably aren't found further south because northern Africa doesn't have the right sort of mountain ranges for them to inhabit.

The sheep are also a distinct group. While takin are probably closer to goats than to sheep, that's not absolutely certain, so the relationship between the three, and where things like tahrs should go is not as clear as the above makes out.

Similarly, serows and gorals undoubtedly form a natural group of small, east Asian browsing goats, and they're probably closely related to muskox. The position of Rocky Mountain goats and chamois is less clear, as is precisely which group represents the earliest branch within the caprine evolutionary family tree.

To get more detail, though, we need fossils. Perhaps one of the most studied fossil species is the Balearic cave goat, Myotragus balearicus. It also turns out to be one of the strangest.

Balearic cave goats lived on the Mediterranean islands of Majorca and Minorca during the Pleistocene, and were the last in a line of species that had likely been there since the islands formed at the beginning of the previous epoch, the Pliocene, a little over 5 million years ago. They died out shortly after 3,000 BC, when humans reached the islands. That means that some of the remains are recent enough for us to extract DNA from them, and when we do, we discover that the animal was actually a sheep. Or, at least, closer to sheep than to anything else alive today.

Still, it looked like a goat, albeit with slightly odd, forward-facing eyes. It had small, goat-like horns on both sexes, and seems adapted for the sort of browsing lifestyle we associated with chamois or gorals today. It's also unusually small for a goat, standing only about 50 cm (20 inches) tall at the shoulder, smaller than any wild species alive today. That, of course, fits well with the fact that it's an island species, shrinking down over millions of years to make the best use of limited resources.

Bizarrely, the animal had only one pair of lower incisor teeth (instead of three pairs, like all other caprines), and, moreover, these grew continuously throughout life, like those of rodents. No other ruminant has teeth like this, and it's an odd adaptation that must have allowed them to continue gnawing away at tough vegetation for many years. Indeed, their life history seems to have been unusually slow, and the adult teeth appeared much earlier than we'd expect. That, however, is in accordance with "Schultz's rule", a rather obscure zoological hypothesis that says that mammals should lose their milk teeth earlier if they live longer.

What's really odd though, is that when we examine the animal's bone structure at the microscopic level, we discover that it resembles that of reptiles. Specifically, the Balearic cave goat seems to have grown in the manner of crocodiles, very slowly, and pausing every now and then when it experienced a bad year for food. Presumably, this allowed it to cope with limited and unpredictable food supplies, but, so far as I'm aware, no other mammal is known to do this. Granted, we haven't checked the microscopic structure of the bones of every mammal species we know of, but at the very least, it seems highly unusual. Estimates suggest that it may have taken as much as twelve years to grow to full size, which is remarkable, given how small it is.

Putting all this into context, it's likely that caprines first appeared during the mid to late Miocene, around 13 million years ago. Their closest living relative is the chiru, and after that, a couple of groups of lowland grazing antelopes represented today by animals such as addax and wildebeest. They likely appeared when some of these animals headed up into the hills of Europe for shelter, and they underwent a rapid diversification at some point in their history, which explains why it's been so difficult to figure out the details of their relationships since.

Estimates of when this rapid burst of new species formation occurred vary. Some have suggested that it happened around the time of the Messinian Salinity Crisis around 5.5 million years ago, a time of dramatic ecological upheaval in Europe. Others have proposed a much earlier date, around 11 million years ago. Under this latter proposal, the goats and their kin owe their success to the development of their climbing ability, and diverged into so many species because they became isolated in different mountain chains, unable to interbreed with one another - a process that has continued over the millions of years since.