That was in 1816, and over the next hundred years or so, various other new genera were named, as further species of cat came to the attention of the naturalists of the day. The tendency in the early to mid 20th century was to tidy this sort of thing up, and for most of that period, it was broadly agreed that all of the "non-roaring" cats, apart from the cheetah, belonged in the same genus. After all, most of them did look fairly similar, especially if you ignored such superficial features as spots and stripes.

Over the last few decades, as it has for other groups of mammals, the pendulum has swung back. Especially now that we have a much better handle on how the different cat species are related to each other, we have been able to resurrect a number of those old 19th-century genera and prune back Felis to just a handful of species.

As I discussed last time, the domestic cat descends from the North African subspecies of wildcat. As I also mentioned, the taxonomy of wildcats remains a little controversial, so that we could argue that either the European wildcat or the Chinese mountain cat are actually the closest living relative of the domestic animal, depending on our definition of "species". But not everyone agrees that even the Chinese mountain cat is really a species on its own account, rather than a subspecies of wildcat.

Fortunately, we pretty much do agree on the other three kinds of cat still included in the genus. These, then, are the closest relatives of the domestic cat that are undoubtedly not members of the same species.

Among these three species, the one thought to be closest of all to the domestic animal is the sand cat (Felis margarita). This split off from the line leading to the wildcats and the Chinese mountain cat around 2.5 million years ago, just before the Ice Ages got going, while the other species (or their immediate ancestors) seem to have been around since the Late Pliocene 3 to 3.5 million years ago.

(You may be wondering why 'margarita'. It seems that when Loche, who was serving in the army at the time, first named the animal, he tried to do so after his commanding officer, General Margueritte. Unfortunately, his printer mistyped the name, and it entered the scientific literature in the feminine form. History does not record what the general thought of this.) 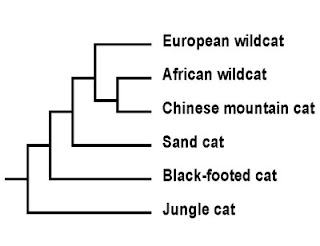 As its common name suggests, sand cats like sandy habitats. Indeed, they are the only cat to truly live in deserts, being found in dry river beds and all but the most unstable and shifting of sand dunes. If anything, they actively avoid areas with moderate or dense vegetation and, while they are capable of drinking, and do it if they can, they can also survive purely on the water content of their food.

There are four generally recognised subspecies of sand cat, although recent evidence suggests that three of these are essentially identical. The one exception is found in the western half of the Sahara, primarily in Algeria, northern Niger, and the disputed territories south of Morocco. The other three live a surprisingly long way away, in the Middle East and Central Asia, and reaching no closer to the others than eastern Egypt. Given the wide gap between them, it's not hard to see how they became genetically distinct, even if they remain a single species.

Sand cats have a number of adaptations to help them survive in their unusually harsh habitat. They are amongst the smallest of all small cats, with short legs that are probably a good idea when you're trying to keep a low profile somewhere that the vegetation won't hide you. Their sandy coat helps them blend in with their environment - the Saharan subspecies also has fainter stripes than those usually seen in zoos, which mostly hail from Arabia or Pakistan. Their ears are proportionately large, with the internal structures even more so than the visible parts, which gives them a particularly acute sense of hearing, perhaps making it easier to hear prey burrowing beneath the sand.

Their paws are large and flat, with the soles entirely covered in fur. This both helps them walk on soft ground and protects their skin from blistering hot sand, although, like many cats, they are almost entirely nocturnal. On that front, since desert nights are exceptionally cold, they have unusually thick fur, and shelter during the day in burrows co-opted from other animals, such as fennec foxes. They dig to uncover burrowing insects, to bury cached food, or, like house cats, to bury their dung, but their claws aren't suited for it unless the sand is soft; they're also fairly blunt, possibly because there's nothing much in a sandy desert to sharpen them on.

While, like many cats, they'll eat whatever they can find, their diet primarily consists of rodents such as gerbils and desert rats, along with some insects and small reptiles such as geckos. They travel a reasonable distance across the desert to find them, perhaps 8 to 10 km (5 to 6 miles) a night, although that probably varies based on the habitat. While they don't socialise very much, they do call to one another at times, if only to keep their distance. The unusually high pitch of their mews is probably related to the ease of sound propagating through an environment lacking in muffling vegetation.

Sand cats breed in winter, giving birth to a litter of about three kittens in the spring. They grow up faster than many other small cats, being independent at about three or four months of age, although they don't breed until the end of their first year.

The black-footed cat (Felis nigripes) is native to South Africa, Namibia, and Botswana. Much of this environment is arid grassland or semi-desert, which the cat prefers to dense scrubland, but it is not a true desert dweller, and so is not found in the heart of the Kalahari. It is even smaller than the sand cat, although not by much, and there is considerable overlap between the two. With its spotted, almost tabby-like coat, it resembles the domestic cat more closely than its northern relative, in part due to its comparative lack of specialisation.

Black-footed cats seem to have a varied diet, although mice and gerbils predominate because that's mostly what there is where they live. However, they do take other rodents, and a number of birds (particularly larks, for some reason - again, maybe they're just common). The latter are sometimes caught on the wing, but the cats also go for easier prey, including invertebrates and baby rabbits.

Scent seems to be particularly important for black-footed cats, who not only spray the borders of their territory but also anywhere else that they think a member of the opposite sex might happen by. Unlike house cats, they do not cover their droppings, leaving them as either an advertisement or a warning depending on the situation. Experiments with captive animals have shown that while almost any new smell gets them interested they are particularly excited in anything that smells of food... or catnip.

Sound is probably less important, and they're fairly quiet except when trying to attract mates, or mothers warning their kittens of approaching danger. Although their external ears have a normal cat-like proportion, the internal parts are enlarged, if not to the same extent as in sand cats. This implies a good sense of hearing, probably attuned for an environment that, like that of the sand cat, is low on vegetation.

Black-footed cats may be active at dawn and dusk as well as at night, but are much less so during the day. Indeed, there are some reports that they get mobbed by birds if they come out in sunlight - where they no longer have the upper hand provided by night vision. It may also help them avoid larger predators, such as jackals.

They spend the daylight hours sheltering in burrows. In some places, these are almost exclusively the abandoned burrows of springhaas, a large jumping rodent native to southern Africa, but presumably, they are willing to accept other alternatives if they present themselves. This is also where they birth their kittens; litters are small, often with only two kittens, but most mothers give birth twice a year.

The remaining species in the group is the jungle cat (Felis chaus) which is found in the Nile valley and across the whole of southern Asia from the Sinai to Vietnam, reaching as far north as Kazakhstan and as far south as Sri Lanka. It is a much larger animal than its relatives, with males reaching up to 12 kg (26 lbs), compared a maximum of around 2.5 kg (5.5 lbs) for a black-footed cat, or an average of 4 kg (9 lbs) for a domestic cat. It also has a relatively drab coat, and tufts of black hair on its ears - all-black individuals have apparently also been seen, but are rare.

Jungle cats are, as one might expect, much more fond of heavy vegetation than the African spcies. They don't seem to be common in true tropical rainforest (or else they're too good at hiding there), but instead live anywhere that there's plenty of water and thick undergrowth, a description that can include anything from tall grassland to open woodland, but with densely vegetated swamps being particularly popular. As a result, the alternative name of "swamp cat" is sometimes used.

Their primary prey are rodents, including voles, gerbils, muskrats, and ground squirrels, but they also eat larger animals, including rabbits, ducks, wild chickens and even the occasional deer fawn. They are primarily nocturnal which, in at least some parts of their range, may help them avoid jackals, which are otherwise after much the same prey. Although they were never domesticated as such, skeletons of the species are known from early Egyptian burials, albeit from well before they started mummifying domestic cats, which implies that they at least kept them in captivity from time to time.

Although some shelter in burrows during the day, it's more common for them to use readily available tree hollows, or to simply hide amongst the dense undergrowth. Kittens are born mostly in the first half of the year, often well before the start of the rainy season if they live where there is one.

Jungle cats are, however, by no means the only small cats native to southern Asia, and next time I will turn there to look at some of the other cats of the region.