The only bovine native to the Americas is the bison (Bison bison). Indeed, it is one of only five species of bovid that fit that description - the other four all being members of the goat subfamily. To give at least some variety, however, there are two generally recognised subspecies of American bison, one of which, following the standard rules for naming subspecies, necessarily goes by the wonderfully tautonymous trinomial Bison bison bison.

This, in fact, is the plains bison, which was once found across pretty much the whole of what is now the contiguous United States, leaving aside only the Pacific and Atlantic coasts and the arid deserts of the Southwest; they also lived in far northern Mexico and up as far as central Alberta. The other subspecies, commonly known as the wood bison (Bison bison athabascae) is native to north-western Canada and to Alaska. Physically, it's slightly larger than its southern relative, which means that, in the absence of American rhinos, elephants, and so on, it is, in fact, the largest living, land-dwelling animal of any kind native to the Americas.

Because bison are, indeed, pretty big. A fully grown male can be anything up to 195 cm (6' 6") tall at the shoulder, and can weigh as much as a tonne (2,200 lbs). Females are, admittedly, quite a bit smaller, although at a maximum of about 180 cm (6') and 550 kg (1,200 lbs) they're still pretty big - and closer in size to the males than, say, those of yak. The horns are also about the same size in both sexes, although (relative to the rest of the animal) fairly small in comparison to those of most other bovines.

Pliocene (Pt 10): Before There Were Zebras 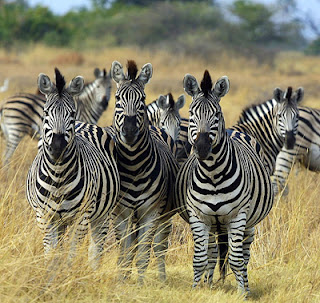 At the dawn of the Pliocene, Africa, like Europe, was a much wetter place than it is today. As a result, it was also much greener, a place of lusher vegetation, and the animals that fed on it. While that likely made little difference to the heart of the Congo jungle and to the more tropical reaches of West Africa, which are about as green as they're going to get, elsewhere the changes would have be obvious to any putative time traveller.

The biggest difference was likely in the north, where the even the very heart of what is now the Sahara Desert was likely covered in arid scrubland - hardly hospitable, but a significant improvement over baking hot dune-fields. By one estimate, moist savannah and open woodland stretched as far north as 21°, covering what are now countries like Chad, Sudan, and Mauritania. Further east, Somalia would also have been covered by woodland, rather than its current dry grasslands, and, at the opposite end of the continent, there may have been small forests in what are now the Namib Desert and the Kalahari.

It didn't last, of course. Around 3 million years ago, as the world fell irrevocably into the long autumn of the late Pliocene, Africa became not only cooler, but drier. And, if the generally cooler climate did not make too much difference to a continent sitting on the equator, the loss of rain certainly did. It's at this time that the Sahara, and the other deserts we are familiar with today, began to form, and the wildlife had to either adapt to that fact, or die. What was good news for voles in Europe, promoting the tougher grasses on which they thrive, was bad news further south, where the grass gave way to open sand.

The Last Seals of the Mediterranean

There are eighteen recognised species of "true" seal (that is, as opposed to fur seals, which are actually more closely related to sea lions). Three of these species are currently listed as endangered under the most widely recognised international standard for such things, the IUCN Red List. Compared with some other groups of animals - rhinos being a particularly obvious example - this isn't really all that bad. But it could, of course, be rather better.

One of the endangered seal species is the Caspian seal, found only in the isolated and land-locked sea of the same name. The other two are monk seals, with one species each in the Mediterranean and off the coast of Hawaii. Quite how two such closely related species ended up on opposite sides of the globe is something I've discussed in an earlier post, but for today, the key point is that there used to be three species of monk seal, and that the other one went extinct around 1952.

Given this, the threat to the two remaining species is surely far from hypothetical. There are thought to be a little over a thousand Hawaiian monk seals alive today, but, as confirmed in a recent species review, the most endangered seal species of all is the Mediterranean monk seal (Monachus monachus) - the only seal species to live in the sea for which it is named.

Bovines: The Other Domesticated Species

The large physical size and herd mentality of bovines makes them ideal subjects for domestication, especially as beasts of burden. So much so in fact, that not only have true cattle been domesticated at least twice, but no less than four other species of bovine have also been domesticated on a wide scale since ancient times. (I am ignoring here the fact that bison, for example, have been farmed for their meat in recent decades, and am only considering "traditionally" domesticated animals). Unlike true cattle, the wild ancestors of these animals remain alive - all four of them in Asia.

One of the more familiar of these "other" domesticated bovines is the yak (Bos grunniens), which is descended from... well, the wild yak (Bos mutus). Today, wild yak are found only on the Tibetan Plateau, although in medieval times they may have lived much further north and west. One small population is known to cross the border into Ladakh in far northern India at certain times of the year, but they are otherwise extinct outside of China, having vanished from Nepal as recently as the 1990s.