The Life of an Endangered Porcupine 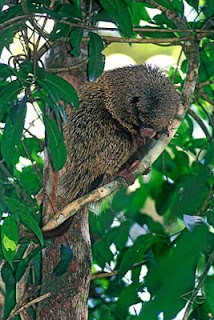 Porcupines are among the most distinctive of all rodents. With their combination of long quills, long tails, and large rodent teeth, they're pretty difficult to mistake for anything else. However, there are actually two families of porcupine, which are not directly related to each other, and which live on opposite sides of the Atlantic Ocean. The porcupines of Africa and Asia and those of the Americas are different in a number of ways; perhaps most notably, the American ones live up trees, while those elsewhere live only on the ground.

Of all the porcupines, though, one of the strangest is the thin-spined porcupine (Chaetomys subspinosa) of eastern Brazil. Although it was first described way back in 1818, for most of the twentieth century, no scientist had even seen one, until a survey in 1986 confirmed their continued existence. Much smaller than other porcupines, and more bristly than spiny, there has been considerable debate as to whether it even is a porcupine. Instead, it's been argued that it might actually be a type of animal called a spiny rat, another fairly odd family of rodents which it does certainly resemble.

The question was settled in 2009 when genetic and chromosomal studies proved, quite conclusively, that it is a porcupine, albeit an unusually small and rat-like one. Indeed, its ancestors seem to have separated from those of all other American porcupines as far back as the early Miocene, around 20 million years ago. In comparison, the next branch we know of within the family is the split between the North American porcupine and its assorted South American cousins around 10 million years ago, with all the other branches being considerably more recent than that.

A Rat's Idea of 'Vermin'

Arguably the most important factor in the success of humanity as a species is out ability to modify the environment around us, to take somewhere inhospitable, and not only make it habitable for our species, but enable it to support far more humans than any natural environment possibly could. The existence of cities, and of the great swathes of agricultural land around them are clear testaments to modify the world to the point of creating entirely new environments.

We may be the most spectacular example of a species that can do that, but many others do so, albeit on a smaller scale. They're not all mammals, or even vertebrates - consider termite mounds, of example. Often, the way that one species modifies it environment also helps others, whether intentionally, as in humans providing farmland for cattle, or as an unavoidable by-product, such as humans creating the perfect habitat for rats. This process is called "facilitation", and it seems to have been more studied in botany than it has in zoology.

However, Andrew Edelman, of the University of New Mexico, has been looking at the interaction between two animal species in the Chihuahuan Desert. Banner-tailed kangaroo rats (Dipodomys spectabilis) are, like many rodents, seed-eating herbivores. They make large mounds in the desert in which to live, and, while they're generally pretty anti-social, not letting other rats near their homes during their lifetime, the mounds can nonetheless be passed down from rat to rat for generations, sometimes surviving for over fifty years.

Over one third of all mammal species are rodents. By almost any reasonable measure, they are the most successful of all the mammalian orders. There are rodents everywhere, in every environment, and on every continent except Antarctica. There are even rodents native to Australia; they're the only placentals of which this is true, other than dingos and bats. They have even adapted, better than any other non-domesticated mammal, to life in urban environments. Indeed, the natural habitat of the house mouse is, pretty much, houses - presumably they used to live somewhere else at some point (river banks, probably), but not really any more.

However, that's going by the scientific meaning of the word 'rodent'. In everyday speech, I've heard the term applied to a even wider range of animals, including such things as shrews, but, most commonly, rabbits. Yet rabbits, along with hares and pikas, are not rodents. On close examination, it doesn't take much to demonstrate that, despite their size and shape, shrews aren't rodents, but rabbits... well, rabbits are pretty rodent-like. So what's the difference?

More Weasels up Trees: Sables and Other Martens

Today, true pine martens venture no further east than the Ural Mountains. But it was not always so, for, at one time, their immediate ancestors ranged across a wider swathe of forest. During the Ice Ages, those in the east became separated from their western cousins, and became a distinct species. Today, beyond the Urals we find, not pine martens, but their close relatives, the sables (Martes zibellina).

Indeed, sables and pine martens still look very similar, although the former have shorter tails, and the 'bib' on their chests is usually less distinct, varying from pale brown to yellowish. Their fur is rich and luxurious, especially during the winter months, and can be anything from pale brown to the near-black colour for which they are most famous. Largely on the basis of this variation in colour, up to thirty different subspecies have been identified, although, personally, I suspect that the animal is just rather variable in appearance, and many of these subspecies won't turn out to be valid under more thorough investigation.

Like pine martens, sables inhabit both deciduous and coniferous forest, although they prefer the latter. They were once found across the vast forests of Siberia, into Mongolia and northern China, and, even today, they inhabit the islands of Hokkaido and Sakhalin either side of the Japanese/Russian border. They can, of course, climb trees, but they seem to do so less than pine martens do, and they make their homes in underground burrows, sometimes of considerable length, with entrances partially concealed beneath tree roots or similar cover.

It's not just humans who have to juggle their lives. Clearly, it's important for any animal to spend some time looking out to see if there are any other animals coming that might want to eat them. But you can't spend all your life watching, because there are so many other demands on your precious time.

A particular problem for herbivores is that they have to spend so much of their time just eating. It does depend exactly what it is that they eat; if their diet consists largely of something highly nutritious, such as fruit, it may not be much of an issue. At the opposite extreme, browsers have a particularly tough time of it, because grass isn't especially nutritious, and takes a lot of time to digest. And you can't scan the horizon for predators while your head is down on the ground. Furthermore, while many herbivores spend much less time sleeping than carnivores do (consider how much time a cat spends kipping), they do have to rest at some point.

These problems become particularly acute during the winter. The food, such as it is, is even less nutritious than usual, and the carnivores are going to be especially hungry as well, which might lead them to take on prey they wouldn't otherwise. But it's more than that, because, for many large herbivores in the temperate regions of the world, winter is also the time for mating. That ensures that it's spring by the later stages of pregnancy, and when the young are still being suckled, and the mother needs the most food. But it does mean that, just when food is short, and predators are about, both females and males have other things on their mind than keeping watch.

Sonar and the Fossil Brain 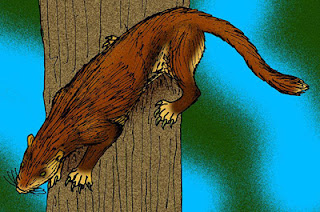 Most species of large, placental herbivore belong to a group broadly defined as the "ungulates". There are exceptions; animals such as elephants, which were once thought to be related to the ungulates, but later turned out to have a completely different origin, some of the larger primates, and the occasional oddity such as the panda. In general though, outside of Australia, the ungulates have been the most successful of the large mammalian herbivores. The group includes two, related, orders of mammals. The even-toed ungulates, including antelopes, cattle, deer, and pigs, among others, are by far the larger group today, while the odd-toed ungulates, which include horses, rhinos, and tapirs, are less numerous, but just as familiar.

Both of these groups, and possibly some of the weird-looking prehistoric herbivores of South America, are descended from a general type of animal called "condylarths". The condylarths are probably not a real evolutionary group of animals, in that they aren't all necessarily closely related, and even if they were, they would just be a rough assemblage of things related to the modern groups, rather than a group in their own right. They may well be what is called a "wastebasket taxon" - a handy place to put some animal whose relationship to other animals you aren't really sure of yet.