Weasels of Mystery: the Ferret-Badgers

So far, in my survey of the weasel family, I have covered a number of familiar species: stoats, badgers, and otters, among many others. There have also been a few species probably less familiar to those of us in the west, such as zorillas, grisons, and tayras. But the least studied of all belong to the last subfamily I have to cover: the ferret-badgers.

Ferret-badgers are, of course, neither ferrets nor badgers, but entirely their own group. As the English name implies, they have features some way between the two animals for which they are named, although they are distinct in a number of ways, too. Their total body length is not far off that of a ferret, but they have the stocky build of a badger, and so somewhat resemble a smaller, slimmer, version of that animal. Proportionally, though, their tail is longer than that of a badger, and they have a narrower, more pointed snout. They have greyish or brownish fur over most of the body, which, again, looks quite badger-like, and black-and-white markings on the face.

However, these markings are not the clear stripes of a badger, although they aren't really the 'mask' pattern found on ferrets, either. One distinctive feature of the markings is a white stripe running from the forehead down over at least the neck, and often further down the middle of the back. American badgers have something similar, but it's often more striking in the ferret-badgers. Like many other members of the weasel family, the creatures are said to have a strong odour, and they're also quite fierce, so it could be that the highly visible markings serve as a warning to other animals.

When I was at school, I was taught that mammals evolved from reptiles. However, at least under the modern definition of 'reptile', that isn't really true. In fact, the mammals belong to their own, distinct, evolutionary lineage, one that has existed alongside the reptiles ever since the latter first came into being. This is a staggeringly long period of time - by definition, it's from long before there were any dinosaurs, for example.

However, this evolutionary group didn't just include the mammals themselves. Mammals may not have evolved from reptiles, but they haven't been around anything like as long in the fossil record. So, if we look back to before the first mammals evolved, we find that there were many other kinds of creature belonging to this group that are no longer around today. Because evolution isn't really a ladder, some of these animals survived alongside the early mammals. In fact, the last ones didn't die out until well after the split between placentals and marsupials.

Studying fossils of these creatures can tell us a lot about where mammals came from, and how they became so different from the reptiles.

Why are Elephants Hairy?

Elephants are, as is well-known, the largest land-dwelling animals alive today. Being so large presents a number of problems, and these are only increased by the fact that elephants, being mammals, are warm-blooded. Specifically, they have to maintain a body temperature of 36°c, only one degree below that of humans.

Perhaps the most obvious problem is that they need to eat a lot in order to survive. The need to keep their metabolism going means that they need more calories for their size, than, say a crocodile, which - being "cold-blooded" - can rely on the sun to warm it up. However, that internal body heat presents another problem as well, and that's keeping cool.

The larger an object is, the smaller its surface area proportional to its volume. This is basic mathematics; if I double the dimensions of an object, while keeping it the same shape, the surface area increases four-fold (22), but the volume increases eight-fold (23). Since heat is lost through the surface, the bigger an animal is the more heat it will tend to retain. This is actually a greater problem for small animals than large ones, since they tend to lose heat rapidly, and therefore need a very high metabolism just to keep up. Mice, shrews, and the like need to eat a huge amount, relative to their size, in order to keep functioning. It obviously doesn't help if the weather is cold, which was the original reason proposed for Bergmann's Rule - the idea that animals are larger in cold climates than they are in warm ones. 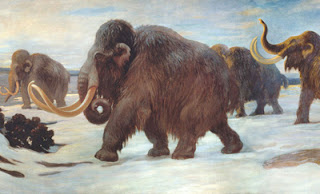 The second-to-last Ice Age ended around 0.13 million years ago, a full 95% of the way through the Pleistocene. As I've described in Part 3, it was just one of a series of Ice Ages stretching back nearly two million years, and separated by relatively warm 'interglacials'. For much of this time, European wildlife had had a distinctly 'African' flavour, with lions, hyenas, hippos, and elephants, among others, inhabiting the continent alongside the ancestors of more familiar European animals.

Such animals prospered during the warmer gaps between the Ice Ages, and this, the last full interglacial, was no exception. The phrase 'hippos in the Thames' is often used when talking about this time, and its perfectly accurate. The climate of the day was, if anything, slightly warmer than it is now, with the ice retreating far into the Arctic. All that melting ice had to go somewhere, of course, and the sites of modern day coastal cities such as Amsterdam and Copenhagen would have been underwater. On land, much of the northern continent was covered by dense oak forests, a green wilderness yet to be cleared to make way for farmland or towns.