First of the Guinea Pigs

Domestic guinea pigs (Cavia porcellus) are widely found as pets in the western world, and are still used as meat animals in parts of South America. But, of course, they didn't come from nowhere, and six species of wild guinea pig are also generally accepted to exist, two of which have only been discovered since the 1980s. They are fairly widespread across tropical and subtropical South America, and it's still not entirely clear which one is the ancestor of the domestic sort, although suspicion tends to fall on the montane guinea pig (C. tschudii) of the Andes.

The guinea pig family (Caviidae) as a whole doesn't include many more species, and most of them, such as the rock and mountain cavies, are physically rather similar to their better known kin; exceptions include the large capybaras and the long-legged and oddly rabbit-like maras. In the distant past, many other species existed, some of them even larger than capybaras, and positively gigantic for a rodent. When it comes to the guinea pigs proper, however, we don't really have much of a fossil history, and none of the living species can be definitively traced back any further than the tail end of the Ice Ages.

Endangered Mammals of the Caribbean 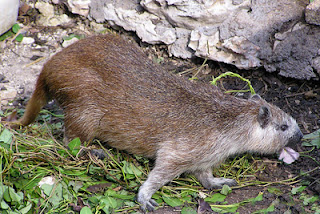 Mammals are found on every major land mass on Earth, except for Antarctica. The same is, however, much less true for 'minor' land masses. Here, isolation from the mainland means that, in most cases, there are less mammal species on islands than there are on neighbouring bits of continent. There are bound to be at least some, in other words, that didn't make it across, or that, if they did, didn't survive and where never replenished. This is even true, albeit to a lesser extent, on some (but by no means all) peninsulas, with fewer species towards the tip than at the connection with the mainland - there are, for example, fewer terrestrial mammal species in South Korea than, say, Manchuria.

There are a couple of important exceptions here. For one thing, the rule doesn't really apply to bats, unless the islands are really remote (such as Hawaii, for example), and we're obviously not talking about marine mammals that use the shoreline, such as seals. Secondly, particularly large islands, especially those in the tropics, don't have this effect at all, being able to provide a perfectly adequate base to evolve a large profusion of unique animals. Madagascar, New Guinea, and Borneo are just, perhaps, the most obvious examples of this. It's probably also worth noting that many islands, even if they don't have very many species in total, often have ones that aren't found anywhere else on Earth, the separation from the mainland working in both directions.

Do Kangaroos Chew the Cud? 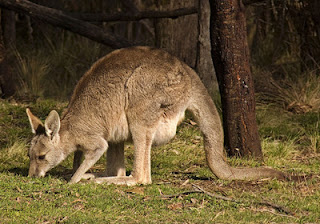 Mammals that eat a lot of grass, or other relatively low-quality vegetation, have to process their food thoroughly to extract the maximum amount of nutrition. I've previously discussed how this works in some detail, but, in general, there are two approaches. In "fore-gut fermenters", the stomach is divided into multiple chambers, allowing the animal to ferment its food, then bring the solid parts back up to the mouth to re-chew ("chewing the cud"), before sending it back to finish the job. This is the system found in cows, deer, camels, and many other animals, collectively known as "ruminants".

The second approach is to place the fermentation chamber behind the stomach, down in the colon. This is less efficient, but quicker, and is the arrangement found in horses, rhinos, and a number of other animals. Rabbits are also "hind-gut fermenters" of this sort, but take the additional step of re-eating the fermented food once it passes out of their back end for the first time.

I mentioned in passing in my previous post that kangaroos are fore-gut fermenters, but that they are not ruminants, and have a slightly different system. Today, I'm going to explain what it is that they do do. (Much of what follows applies equally to wallabies, and, to a lesser extent, rat-kangaroos).

Pinnipeds: Killer Seals of the Antarctic

As one might expect, seals, for the most part eat fish and squid, although the precise details do vary quite a bit between different species, based on such things as their diving ability, as well as where they happen to live. Two species of seal in the Antarctic, however, do have a somewhat different diet, at least in part.

Leopard seals (Hydrurga leptonyx) are among the larger seals, with full-grown adults ranging from about 240 to 320 cm (8 to 10½ feet) in length. While this is still quite a bit smaller than elephant seals, the largest females - which are, unusually, larger than the males - can still weigh over half a tonne. They typically inhabit frozen waters far to the south, moving over the course of the year as the ice front expands and contracts with the changing seasons. Younger individuals seem to travel further north than full grown adults, and, while the winter range normally extends only as far as the various subantarctic islands, the Falklands, and Tierra del Fuego, they are occasional visitors to continental Chile, Tasmania, and some points even further north. A couple of reports from the middle of the last century, supported by actual skeletal remains, even refer to lone individuals getting as far north as the Cook Islands in Polynesia.