Small Cats: Almost a Puma and Not Quite a Lynx

As I mentioned at the start of this series, the cat family can be divided into two living subfamilies. The "roaring cats" are all large animals: lions, tigers, leopards and jaguars. The "purring cats", however, are typically much smaller... but there are exceptions. Marginally the largest member of this subfamily is the animal variously known as a puma, cougar, or mountain lion (Puma concolor). These are all the same animal, although the term "puma" is sometimes reserved for the southern subspecies and "cougar" for the northern one(s). They were once found through essentially the whole of the Americas apart from Alaska and central/northern Canada, but, aside from a population of 200 or so "Florida panthers", are now absent from much of eastern North America.

Despite its unusually large size, however, the puma does not represent some early offshoot of the main feline lineage. Indeed, it is more closely related to the domestic cat than it is to, say, the ocelot. The cheetah (Acinonyx jubatus), the only other "purring cat" that comes close to it in size (the females are roughly similar in weight, but male pumas are larger), turns out to be a fairly close relative, despite the cheetah's remarkable specialisations for speed. The closest relative of the puma, however, is a somewhat less well-known animal: the jaguarundi (Puma yagouaroundi).

The Tale of the Tail 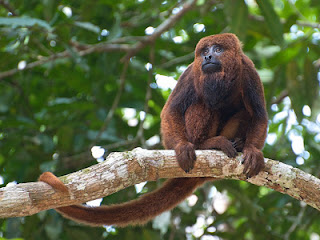 The defining feature of vertebrates is that they possess a vertebral column, or "backbone", a series of interlocking skeletal structures that run down the centre of the back and serve to protect the main nerve cord. Unless you're a shark or something of that sort, these structures are made of bone and, at least once we ignore fish and amphibians, there's a reasonably consistent pattern as to how these individual vertebrae are structured.

One of the distinguishing features of the mammal skeleton, however, is that the backbone can be divided into five distinct regions, based on the function and detailed structure of the vertebrae within it. At the front end (or top, if you're bipedal) are the cervical vertebrae, which together form the neck. The first two of these are further specialised, the frontmost one because it has to connect with the skull, rather than to another vertebra in front of it, and the second because it's the pivot that allows the head to turn. Including those, there are almost always seven cervical vertebrae, even in giraffes... although sloths and manatees are exceptions, because of course they are.

The largest carnivorous marsupial alive today is the Tasmanian devil (Sarcophilus harisii). Noticeably smaller than a European badger, it's still almost twice the weight of the next nearest contender for that title, or, indeed, of the omnivorous Virginia opossum so well-known to Americans. Most other living predatory marsupials can more accurately be described as "insectivores", due to their small size.

Unsurprisingly, this wasn't always so. Most famously, perhaps, there was the thylacine or Tasmanian wolf, which officially went extinct in 1936. There were also the "marsupial sabretooths" of South America, which died out during the Pliocene about three million years ago. However, these are no longer thought to technically be marsupials in the sense of being descended from the last common ancestor of the living species, even if they were definitely in that branch of the mammalian family tree.

With the obvious exception of the cheetah, cats are not generally pursuit predators. Rather than chasing their prey over a long distance, they pounce on them from ambush, dispatching them rapidly. As a result, they require habitats with plenty of opportunity for concealment, somewhere that they can hide themselves from potential prey until it's too late. The majority of small cat species are adapted to living in forests, where the bushes and other heavy undergrowth provide a perfect environment for this activity.

After the small cats of the Leopardus lineage first entered South America, it is just such places that most of their descendants ended up living in. This is where we find ocelots and all the other small spotted cats of the continent today. But, with little effective competition from other native predators (there really wasn't anything cat-like on the continent before they got there) it's perhaps unsurprising that some of them did adapt to different, more open habitats, as some of their more distant relatives had elsewhere.