With the obvious exception of the cheetah, cats are not generally pursuit predators. Rather than chasing their prey over a long distance, they pounce on them from ambush, dispatching them rapidly. As a result, they require habitats with plenty of opportunity for concealment, somewhere that they can hide themselves from potential prey until it's too late. The majority of small cat species are adapted to living in forests, where the bushes and other heavy undergrowth provide a perfect environment for this activity.

After the small cats of the Leopardus lineage first entered South America, it is just such places that most of their descendants ended up living in. This is where we find ocelots and all the other small spotted cats of the continent today. But, with little effective competition from other native predators (there really wasn't anything cat-like on the continent before they got there) it's perhaps unsurprising that some of them did adapt to different, more open habitats, as some of their more distant relatives had elsewhere.

By far the more succesful of these, in modern times, are the Pampas cats (Leopardus colocolo). It's fair to say, that there is a lot of confusion about the scientific status of these animals and that we honestly don't know that much about them in the wild.

The Pampas cat was first described by the Jesuit priest and naturalist Juan Ignacio Molina in 1782. He called the animal "il colocolo" in Spanish, and gave it the scientific name Felis colocola - note the "a" at the end. His English translator later changed the last letter to match, perhaps assuming it was a typo in the original, and that's the spelling that's typically been used since. Technically, though, you're not allowed to do that, and in the last three or four years there has been something of a switch back to the original spelling in scientific papers... but it's so recent that, even today, many use the old one.

That minor typographical point aside, there's a larger debate about whether or not the Pampas cat is a single species. The problem here is that the cat has a very variable appearance across its range, and also lives in a remarkably wide range of habitats. It's best known, of course, for living in the tall grass of the open Pampas, but it's are also found in the savannah-like woodland of the Brazilian cerrado, semi-arid desert margins, swampland, and mountainous cloud forests.

The front legs have clear stripes on them, but that's about as far consistency of their coat pattern goes. The background colour varies from reddish-brown to grey across the range. They sometimes have spots (especially on the underparts) but more often do not, perhaps because spots may be more useful as camouflage in the dappled sunlight of forests than on the open plains. Some have faint stripes on the body instead of spots, while many are much plainer. The fur is either shot and soft, long and coarse, or somewhere in between, and there is even some technical dispute on variations in the exact shape of the nose.

What do we make of all this? As happened with a great many other animals, a number of seperate species were identified in the 19th century, but in the 20th they were all merged back into one, albeit with anything up to eleven subspecies. In 1994, a detailed study of physical variation among Pampas cats was published, and came to the conclusion that they represented three different species. A further study in 2010 increased that to six. 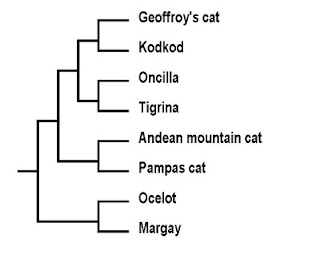 By that point, though, there were already quite a few genetic studies weighing in on the question. These had all concluded that, while Pampas cats had split into at least three different isolated populations during the Ice Ages around a million years ago they nonetheless represent just one species. The upshot of all this is that there do indeed seem to be distinct, identifiable, populations of Pampas cat, but that it's not clear whether or not they are distinct enough to be considered separate species. It's entirely plausible that what we're seeing here is one species part way through the process of splitting into three (or more) different species and that the question of which side of that imaginary line they happen to be on at present is as much a matter of subjective opinion as scientific fact.

For what it's worth, though, if there are three species (and as noted above, some authorities consider even that to be an underestimate) they are probably these: The colocolo (L. colocolo) lives in central and northern Chile. The Pantanal cat (L. braccatus) lives in Brazil south of the Amazon, Uruguay, and parts of northern Argentina. The one that's left with the common name of "Pampas cat" (L. pajeros) lives in Ecuador, Peru, and Bolivia, and through the Pampas of Argentina right down to the southern tip of Patagonia.

There has, unfortunately, been relatively little study on Pampas cats that goes any further than arguing how many different species there are and where they might be found. We know that they primarily eat rodents, mostly mice but also a few larger animals such as wild guinea pigs. They also eat some ground-nesting birds, such as ducks, and have even been observed stealing penguin eggs in the extreme south of their range. They seem to be less nocturnal than many other cats, and may even have a daily activity pattern that varies depending on circumstances rather than being closely tied to the day/night cycle. (This is rare in mammals, but not perhaps as much as you might think; it's true of a number of lemur species, for example).

The few animals kept in zoos have litters of from one to three kittens at a time, which is presumably true in the wild as well. Some wild hybrids of Pampas cats and oncillas have been reported, although the only one closely examined turned out to be sterile. Perhaps because it's so widespread, the species is not considered particularly endangered - it was widely trapped for its fur as recently as the 1970s, but this is less of a concern in modern times.

Unforunately, the one remaining species of the Leopardus cats that I have yet to cover very definitely is endangered, and has been formally listed as such since 2002. This is the Andean mountain cat (Leopardus jacobita). In fact, it's not only rare, it's also perhaps the least-known cat species in the world.

Andean mountain cats are slightly larger than the domestic animal, a feature enhanced by their thick fur. They have a few spots, mainly on the whitish underparts, but the brownish stripes are far more noticeable, especially where they form bands across the thick, bushy tail. This makes them readily distinguishable from Pampas cats, and there isn't even enough variation amongst them to justify assigning subspecies, let alone to argue that there might be more than one kind.

They live, as their name suggests, in the Andes from Peru to Argentina and Chile. They are only ever found above the tree line, in high altitude open landscapes with little more than the occasional dwarf shrub for vegetational cover. How high this altitude is depends on how far south they live; towards Patagonia they may be found as low as 1 km (3,300 feet), but in most of their range they don't venture below 3 km (10,000 feet) and one was spotted as high as 5.1 km (16,700 feet) in Peru.

The few studies of their diet suggest that Andean mountain cats are specialist predators on mountain viscachas (Lagidium spp.), long-eared rodents that look remarkably like rabbits. Other reports suggest that they also eat chinchillas, which live in much the same area, but there's little to indicate that they eat much else. Both viscachas and chinchillas are agile animals, and the cat has to be equally so to capture them, hunting for them in the barren rockfields where they make their home.

While the few recorded sightings of live animals were mostly during daylight hours, that may just be a reflection of when humans happen to be looking; a camera trap study conducted last year implies that they're largely nocturnal.

And that's pretty much all we know; an unusual situation for an animal as charismatic as a cat. This is largely because the cats are so rare, with one estimate suggesting that the population of breeding adults is less than 1,500, scattered widely across a remarkably desolate and remote region. Unfortunately, this isn't protecting it although, for once, the primary threat to the animal's habitat comes not from farming so much as mining, although climate change is also a concern. With a population as small and widely spread as it is, it wouldn't take much to pose a risk to the survival of at least some subgroups, or even the species as a whole

Even before the advent of the sort of detailed analysis that modern genetics allows, it was apparent that Pampas and mountain cats were related to ocelots and the other small cats of South America because they all share a different chromosomal arrangement to other members of the cat family. There is, however, one species of small South American cat of which this is not true, and it is to that that I will turn next.