Miocene (Pt 2): Before There Were Mice

After a brief cold snap at the very dawn of the epoch, the world of the Miocene warmed rapidly. Europe became, if not truly tropical, at least subtropical, with the interior covered by great forests of oak, laurel, and cinnamon, with magnolia and figs joining pine trees in the highlands. Along the coasts, the hot, damp, climate encouraged the growth of mangrove swamps and palm trees as warm sea currents flowed in from the Indian Ocean - still connected to the Mediterranean at this time. With no ice caps at the North Pole, and relatively few at the South, sea levels were much higher, and parts of continental Europe may, in those days, have still been islands. Certainly, Aqutaine in south-western France and the lower Rhône valley in the south-east were shallow bays stretching some way inland, as was what is now the Tagus valley in Spain and Portugal.

This rich and verdant landscape was home to a wide range of animals, many of them survivors of even earlier times. Many of these, such as the tapirs, didn't survive long in Europe, but a great many did, with musk deer, pigs, and rhinos dominating the herbivorous fauna, and animals less familiar to modern eyes taking the lead among the large carnivores.

But then, as now, the great majority of mammal species were small. While the sight of Diaceratherium rhinos wallowing in the lush swamps of the Swiss shoreline is the sort of thing that would draw the immediate attention of a time-travelling tourist, there was also plenty going on underfoot. Yet the two most common groups of small non-flying mammals that we have in Europe today - the mice and the voles - did not yet exist. So what was there?

Is the Dormouse an Endangered Species? 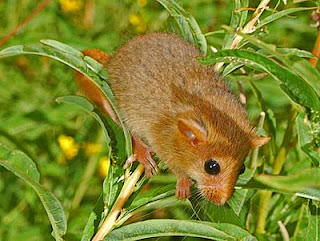 At first glance, this seems a fairly daft question. A moment's search on the internet will reveal that only is the dormouse not an endangered species, it isn't even under any significant threat of becoming one. It's about as safe as any species that doesn't specifically rely on human beings can be. There is no risk that we are going to, at any point in the foreseeable future, even come close to running out of dormice.

Look past the headlines though, and things do become a little more complicated. No, the dormouse is not an endangered species, but its population is under threat in certain parts of its range, particularly in the northwest. Some of these populations are isolated from the main bulk of the species in mainland Europe by the presence of various seas, and perhaps the most obvious of those is the British population. Since this population lives on a (relatively) northerly island, and since there are, apparently, risks to the dormouse in the north of its range, it is, in fact, reasonable to ask whether or not the dormouse is an endangered species in Britain.

Pinnipeds: Decline of the Monk Seals

The great majority of seal species are found in cold, often freezing waters. Even harbour and elephant seals, which are frequently found in temperate, or even subtropical, climes, also inhabit colder latitudes for at least part of the year. There are just three modern species of true seal that are found solely in warm waters, and they all happen to be closely related. These are the monk seals.

It's not actually known why these animals are called "monk" seals. The oldest known reference to the term comes from Johann Hermann in 1779, when he wrote the first scientific description of the Mediterranean monk seal (Monachus monachus), and gave it its scientific name. The only reason he gave for doing so was that he'd heard that the animal was called that in France, and thought that maybe that was because, seen from behind, the head and shoulders looked a bit like a robed and hooded man. But he was guessing about that latter part, and there doesn't seem to be any independent corroboration that the animal really was called a "monk seal" in France (or, indeed, anywhere else) prior to his naming of it. Presumably, he'd got the name from somewhere, but, for all we know, he might have misremembered the details.

First and Last of the South Asian River Dolphins

Although the whales are undeniably spectacular, the majority of cetacean species are much smaller; the sort of animals we generally refer to as "dolphins". The great majority of these belong to the family Dephinidae, variously termed the "oceanic dolphins", "pelagic dolphins", or even "true dolphins". This is a large family, with nearly forty species, including killer whales and pilot whales alongside their smaller kin.

Whatever we call this family, it, in turn, belongs to the larger group of the "delphinoid cetaceans", which also includes the six species of the porpoise family and two other whales - the narwhal and beluga. Taken together, these animals and their extinct relatives have dominated the count of cetacean species across the world for millions of years, forming a key part of the ocean ecology. Of all the other cetacean groups, only the mysterious deep-sea beaked whales come close in terms of the number of species, and even they don't appear to be as varied.

The Social Lives of Elephants

Elephants are the largest land-dwelling animals alive today. They are also among the most intelligent non-primate species, with complex social lives, and, as I noted in passing a few weeks ago, seem to be able to pass the Mirror Test for self-awareness - the only mammal, other than apes or dolphins, for which there is reasonable evidence of this ability.

There are many reasons that we'd like to know more about the lives and habits of elephants; even leaving pure curiosity aside, on a practical level it might help us to find ways to manage elephant populations so that they can peacefully co-exist with our expanding agricultural and residential footprint.

But there is a problem to really getting to grips with elephant "societies" and how they function. That's because, in addition to being large, elephants are also remarkably long-lived. If you go out into the wild and study a herd of elephants for five years, you will get a lot of information, but it's really just a snapshot of what's going on in the course of their lives. Elephants can live for at least seventy years, and a generation lasts for about 25 years, so getting a really good picture of an elephant's life would take... well, a human lifetime.