Grey Seals on the Rebound 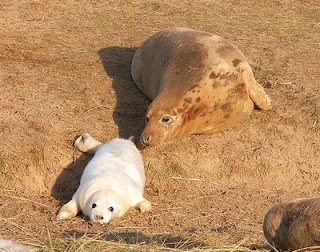 According to the IUCN Red List, which is probably the most widely used catalogue of conservation statuses, roughly a quarter of all mammal species are "threatened with extinction". That's a broader category than "endangered species", but, either way, it's a proportion that's growing. (As it is, of course for non-mammalian species; amphibians, for instance, seem to be doing particularly badly).

Partly that's because we're getting better at evaluating such things, and identifying species as being at risk when we previously knew little about them - or, in many cases, didn't even know they were separate species. But it's also a consequence of mankind's ever-expanding ecological footprint, as some species become threatened that weren't previously.

The jungles of Southeast Asia are home to a particularly large number of cat species. These include tigers, leopards, and clouded leopards, but also a number of smaller species. Of these, the most common are probably the jungle cat, which is a particularly close relative of the domestic animal, and the leopard cat (Prionailurus bengalensis) which is slightly less so.

Leopard cats were first identified as a separate species back in 1792, on the basis of animals known to live in Bengal, and some variant of the name "Bengal cat" remains common in a number of non-English languages. That "leopard cat" is often preferred is doubtless due to the fact that the Bengal region is just one part of their much larger total range.

Indeed, leopard cats are known from Kashmir in the west right across to Vietnam and Malaysia in the east, and also through most of the non-mountainous parts of China, reaching into the Russian Far East north of Manchuria. They are one of only two species of wild cat native to Korea (the other being the Eurasian lynx) and they are also found on a number of islands, including Taiwan.

At the dawn of the Miocene, 23 million years ago, Africa was a very different place than it is today. This was as much due to simple geography as anything else. For one thing, the Sahara Desert didn't exist yet - even the most extreme estimates suggest that it didn't begin to appear until the Late Miocene, and it may well have not have formed until at least the Pliocene around 4-5 million years ago. Before this time, much of the continent was probably covered in warm, damp, forests interspersed with patches of more open woodland and scrub.

More significantly, perhaps, Africa was still an island continent, separated from Eurasia by a body of water called the Tethys Seaway. It had been like this, isolated from the rest of the world, for millions of years, during which time it had developed its own unique animal life, quite different from that elsewhere. At the time, the same was true of South America (and it still is for Australia), but that continent retained its unusual animals for much longer, not contacting the north until as recently as 2.5 million years ago, shortly before the first of the Ice Ages. When that did eventually happen, it led to the Great American Interchange, which set the scene for much of the American fauna we see today.

Musth and the Older Elephant

As with many other group-living mammals, male and female elephants not only spend much of their lives apart, but also live in quite different sorts of society. Females live in small family groups, dominated by the eldest among them and consisting of her children and other close relatives. These groups, in turn, form larger aggregations known as 'clans', the membership of which can change over time, with individual families joining or leaving as circumstances dictate. The precise details vary between the three different species of living elephant, but these basic rules seem to be universal.

Males, on the other hand, leave the family unit of their birth as soon as they reach puberty. From then on, they spend much of their lives alone, without the benefit of the matriarch guiding their sisters. . From time to time, they may meet up with other males, or even join female groupings, but these are always short-term arrangements. This creates a situation where solitary males regularly travel about, hoping to encounter different female groupings as they do so; similar behaviour is seen among mammals as diverse as giraffes, polar bears, and killer whales.