Last September, I began a survey of the weasel family, the largest, and arguably the most varied, family of carnivorous mammals. Since then, I have managed to give at least a brief description of every living species in the family, from stoats and badgers to otters and wolverines. But how do all these animals relate to one another, and where did they come from?

In the past, scientists would work this out by examining the physical features of animals, reasoning that those with the greatest similarity were the most likely to be related. By adding in information gleaned from fossils. such as their age and location, and any evolutionary changes they may have undergone, it's possible to get quite a lot of information this way. However, today, it is more common to use molecular and genetic information, seeing how genes and the proteins they produce have changed in subtle, often invisible ways, over the course of time. Taken together with the fossil information, this can reveal many relationships that might otherwise remain obscure.

In the very first attempt at scientific classification of animals, way back in 1735, weasels were grouped together with martens, polecats, and civets as a sort of collective group of small slender mammalian carnivores, although otters and badgers were placed separately.  However, it was not until 1817 that the weasel family was formally named by German naturalist Johann Gotthelf Fischer von Waldeheim. That, of course, was still before we understood evolution, and it's hardly surprising that we've moved on since then.

Poo is useful stuff to zoologists: a lot of field work involves examining the stuff. It can tell you what an animal has been eating, how it behaves, and maybe something about it's genetics. And, of course, it can also tell you where it's been. Take Geoffroy's spider monkey (Ateles geoffroyi), for example.

Spider monkeys are moderately sized monkeys, noted for their prehensile tails and remarkable agility. I saw some (although not Geoffroy's species) at London Zoo on Monday, and, despite the poor weather, they really were a delight to watch, full of enthusiasm and energy. Seeing them at play, it's hard to escape the impression that they have five arms: their feet are effectively an extra pair of hands, and their tail is so flexible and has such a good grip that it might as well be a fifth one.

They live, unsurprisingly enough, up in the trees - specifically ones in Central America - sleeping in them at night and travelling between them to feed during the day. They have particular favoured trees to sleep in, and deposit a lot of dung at the base over the course of the night. Such 'latrine' use is common among many mammals, and just finding where they are provides a good means of establishing what the monkeys are up to without having to disturb them. 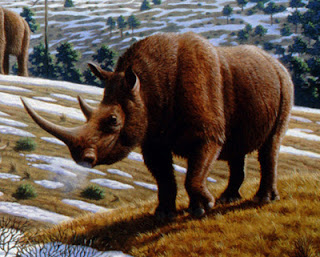 There were a number of Ice Ages during the Pleistocene, but the most severe of them all seems to have been the most recent one - the Last Ice Age. Or, perhaps more accurately, the Last Ice Age So Far, since there's no particular reason to assume there won't be another one along in a few thousand years time. This was the time when the earlier steppe mammoths were replaced by their more famous descendants, the woolly mammoths. But woolly mammoths did not live in isolation. With what other creatures did they share their world?

Even today, deer are relatively common animals in the wilder forests of Europe. In the Pleistocene, before the spread of farms and towns, they would have been even more so. At the height of the last Ice Age, however, there were relatively few forests in Europe, and many of the deer we are familiar with - red deer, roe deer, and so on - would have been sheltering in warmer climes. Reindeer and moose, on the other hand, were doing well, with the former, in particular, being widespread across the continent.

Throughout the course of the Pleistocene, however, there had been another kind of deer in Europe, one that is no longer with us. These were the "giant deer" of the genus Megaloceros. Some species, isolated on islands created by the rising melt-waters of the glaciers between the Ice Ages, were unusually small, but, in general, they had been getting larger as the Pleistocene went on. Before the last Ice
Age, the largest species, slightly bigger than the primitive moose of the day, had been M. verticornis. Now that was replaced by an even larger species, the Irish elk (Megaloceros giganteus).

It's Tough Being a Herbivore

The majority of mammalian species are, to a greater or lesser degree, herbivorous. This shouldn't be too surprising: there is always more plant matter around than there is fresh meat, and it's a lot easier to catch. While the earliest mammals may well have fed on things like insects, a great many have since taken advantage of the widespread presence of plants to become herbivores.

Strictly speaking, most won't absolutely refuse to eat animal matter. For one thing, if you're munching down on leaves, you're going to eat the odd insect now and then, if only by accident. And most mammalian herbivores will, in reality, eat the occasional bit of - mostly invertebrate - flesh, or tuck into things like eggs if they find them lying around. But these are a minor part of their diet at best, allowing us to draw a useful, if hazy, line between them and true omnivores.

The largest order of mammals are the rodents. While many are genuinely omnivorous, most use their great gnawing teeth to feed on things like nuts and hard seeds. This illustrates one of the problems with herbivory: while your food might be easy to catch, it's not necessarily very easy to eat. Many wild plants are hard or thorny, and they're often not as packed with nutrients as meat is. As a result, herbivores usually spend a lot of their time feeding, and they require special adaptations to make the most of their meals.

How Deep is a Prairie Dog's Burrow?

If you live in Britain, or, for that matter, many other parts of Europe, a "squirrel" is a bushy-tailed rodent that lives up trees. But this is by no means an adequate description for all squirrels. A great many squirrels are ground-dwelling animals, and would rarely, if ever, climb a tree. This is even more apparent when we look at the squirrel family as a whole: there are something like three hundred different species of squirrel worldwide, and only around half of them live in trees. The others generally dig burrows.

Squirrel burrows include a deep nest chamber, in which the animal can sleep, rear its young, or simply hide from predators. Connected to this there will usually be a number of tunnels, and multiple entrances. In the event that, say, a weasel, chases you into your burrow, it is really important to have an escape route, so a single entrance is unlikely to be enough.

Considering that squirrels are relatively small animals, these tunnel systems can be quite impressive. Since they're only using the burrows for shelter, they won't necessarily be as dramatic as those of animals like moles, that also need them to travel in search of food, but they can still be quite long and deep.

How long, and how deep? Well, that depends on a lot of factors. Different species will dig different kinds of burrow, and there's no reason to assume that, even given identical circumstances, all members of the same species will dig identical burrows. In any event, circumstances aren't identical. The nature of the environment, and particularly the soil, will affect how big a burrow it's practical to dig at all, even assuming you wanted to - and, generally speaking, animals won't dig a burrow any bigger than they have to, because it's exhausting work.