The Many Kinds of Living Marsupial

This blog probably wouldn't exist were it not for the fact that there are a great many different kinds of mammal alive in the world today. Most of these are placental mammals, giving birth to (relatively) fully formed young that have been nourished by a placenta in their mother's womb. A significant minority, however, are marsupials, which belong to a separate evolutionary line that split from the placentals long before the dinosaurs died out.

Marsupials are diverse animals, in many cases, paralleling their placental counterparts in some key aspects of their anatomy or behaviour. True, they are not quite as diverse as their placental kin - there are no marsupials bats or dolphins, for instance. There are around 350 known living species of marsupial, commonly grouped into 19 "families", and, while is this undeniably small compared with the 5,000+ species and 120 or so families of placentals, it's hardly insignificant. 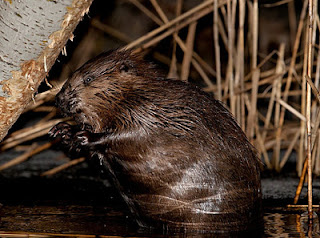 There are, arguably, a couple of reasons why beavers don't really belong in this series on the small native animals of Britain. So far, I have looked at mice, voles, rats, and squirrels, all of which are undeniably both small and British... but they are also all rodents, and so I may as well complete the set of such animals by including the one that isn't really all that small.

Indeed, weighing in at around 15 to 20 kg (33 to 44 lbs) on average, and occasionally a fair bit larger, the Eurasian beaver (Castor fiber) ties with its American cousin for the honour of being the second-largest living rodent, after the capybara. It is also, of course, a very distinctive animal, and one whose general appearance most people are surely familiar with.

Yin and Yang in the Bat World

Although the term is used more casually in everyday English, in scientific terminology a "family" of animals is a specific rung on the taxonomic hierarchy. Cats (Felidae) are a family, but otters (Lutrinae) are just a subfamily within the larger weasel family. In turn, families are grouped into "orders", and the great diversity of mammals is indicated by the fact that the standard modern scheme recognises no less than 27 living orders of mammal.

In terms of the number of known species, the second-largest order of mammals, after the rodents, is that of the bats. There are over 1,400 named species of bat, currently grouped into at least 18 different families. Yet they're probably also the least studied of the major mammalian orders - although, to be fair, this may depend on your definition of 'major'. Compared with primates, or hoofed or large carnivorous mammals, we know relatively little about their evolution, and how the various sub-types of bat relate to one another.

Miocene (Pt 15): The Coming of the Rain Shadow

As the world passed into the Late Miocene, worldwide temperatures dipped from the high summer of the Middle Miocene towards... well, if not autumn, perhaps a late summer, since the world was still overall, probably warmer than it is today. For North America, however, perhaps a more significant effect was caused by the slow shuffling of the continents. A large chunk of rock that corresponds, broadly speaking, to present-day California began to tilt, causing the eastern edge to rise up.

We're not talking a huge tilt, of the sort that you'd notice if you were standing on it - it's been estimated that the eastern end was rising by somewhere around 0.25 mm (1/1000 of an inch) per year relative to the western one. Give it a few million years though, and that starts to be noticeable. While this process really only accelerated during the subsequent, Pliocene, epoch, even at this time, the rise of the eastern end of that block of crust was slowly, but surely, creating what we now call the Sierra Nevada Mountains.