This is a blog about mammals, so it's only right to point out, every now and then, that birds have no monopoly on animal flight. The only mammals capable of true flight are, of course, the bats - flying squirrels and their ilk can only glide, not truly fly. (Nor are mammals and birds alone, of course; there are many flying insects, and once upon a time there were also pterosaurs). Still, birds have been flying for much longer than bats have, so might they be better at it?

A recent study by Florian Muijres and colleagues reveals, perhaps surprisingly, that the answer is 'yes'. They put birds and bats in a wind tunnel, and measured their ability to generate lift, and the lift-to-drag ratio, which indicates how much energy they have to put into it. By both measures, birds outperformed bats of similar size. Why so? After all, while birds have been flying for three times as long as bats have, the oldest known bat fossil is still very old, and you'd think they'd be pretty good at it by now.

Being a Little Bit Pregnant

To begin with, the egg cell starts to divide immediately after fertilisation. In most mammals, it then rapidly forms into a hollow ball of cells that move down through the reproductive tract into the womb. During this time, it really doesn't change much in size; the ball of cells, known as a blastocyst, is not much larger than the unfertilised egg, and the individual cells within it are much smaller.

Once it reaches the womb, the blastocyst attaches itself to the uterine lining and begins to send out tiny tendrils of cells that penetrate the wall in search of blood vessels. Once it finds them, the embryo can obtain nutrients from the mother, and starts to grow and develop. The side of the structure in contact with the uterine lining develops into the placenta, while the remainder forms the embryo proper, and the amniotic membranes surrounding it. This even occurs in marsupials, although, in their case, the placenta is primitive and short-lived, and, for that matter, there's something similar in some reptiles, such as sea snakes.

The Importance of Grooming 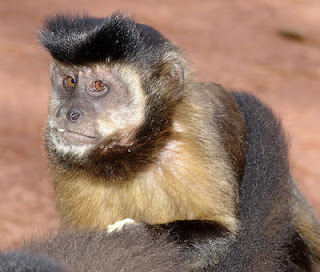 Primates are amongst the most social of mammals. They tend to gather together in bands or aggregations, often based on female kinship, and with a relatively small number of dominant males, born outside the group. The details vary considerably between species, as we might expect, but one feature that is relatively common is the way that such social bonds are formed and cemented. A particularly common way that primates maintain these bonds within a group is through grooming.

In grooming, the animals pick through a partners hair, removing lice, ticks, and other parasites, and generally keeping each other clean. This has obvious health benefits, and, in fact, these may be wider than is clear at first glance, since there is evidence that grooming causes the release of endorphins, hormones that, in humans, reduce pain and generate a feeling of well-being. Probably as a result of this, in at least some species, monkeys with better social relationships apparently live longer and have healthier offspring than those who feel more isolated.

Such benefits generally apply to the recipient. What does the animal performing the grooming from the practice? The most apparent and immediate benefit is that the other animal may groom you back, so that everyone benefits. Indeed, it's entirely possible that we humans don't cement social bonds this way simply because we haven't got the fur to make it worthwhile. But, given the complex, and non-egalitarian, social lives of most primates, there might be other benefits as well, which could explain why it's not simply the case that every monkey in a troop grooms every other one equally.

The otters are, arguably, the least weasel-like of all the members of the weasel family. Although the relationship has been clear for a long time - the first scientific description of an otter, by Linnaeus in 1758, actually placed it in the genus Mustela, to which stoats and weasels belong - so have the differences. As early as 1771, Danish zoologist Morten Thrane Brünnich split them off from their fellow mustelids, erecting the new genus Lutra to describe them.

By 1838, at least three genera of otter had been described, and the group were raised to 'subfamily' status to distinguish them from their terrestrial kin. Other subfamilies were erected later, largely to distinguish the badgers, but the otters have remained as a clearly distinct group within the overall weasel family.

Genetic studies in the last four years have given us a much clearer picture of how the various kinds of mustelid are related to one another, and it turns out to be more complicated than we thought. For example, martens turn out to have been around longer than otters have, which was something of a surprise. The otters, however, survived the revision unscathed, confirmed as a genuine evolutionary group, albeit one that is younger than we might have guessed. Their closest relatives within the family turn out to be the mustelines, the group that, among others, includes the semi-aquatic mink.

Three different orders of mammal include at least some species that have returned to the sea. Of these, perhaps the best adapted at the cetaceans, including the whales and dolphins. All cetaceans are carnivores, feeding on various aquatic animals, ranging in size from krill to their fellow cetaceans, and often doing so far from land. Similarly, seals and some species of otter spend much of their lives at sea, and they, too, are carnivores - mostly feeding on fish, although some tackle other prey, such as penguins. This is unsurprising because, aside from plankton, there isn't generally a lot of plant matter far out at sea, and mammals generally aren't as good at eating plankton as fish are.

But the third group of truly aquatic mammals are, in fact, herbivorous. These are the sirenians, and there are only four species alive today. Three belong to the manatee family, including one species that lives off the southeastern coast of America. The fourth is the dugong (Dugong dugon), an inhabitant of coastal waters around the Indian Ocean and into the western Pacific. The dugong is the only living member of its family, and, like manatees, it inhabits shallow waters because there, the sunlight can reach the seabed and permit the growth of the seagrasses that it eats.