The Secret Life of the Monito del Monte 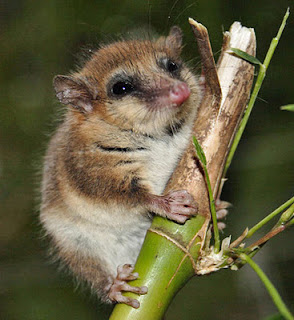 There are something like a hundred species of marsupial in South America; hardly an insignificant amount. As I've mentioned before, the marsupials were, in fact, in South America before they ever reached Australia. While some headed south over the still green and verdant lands of Antarctica to reach the Australian continent beyond, others stayed behind, becoming the ancestors of the opossums and shrew-opossums that still live in the Americas today - including, of course, one species in the southern US.

But there is an oddity that confuses this simple picture, and that is a curious animal called the monito del monte (Dromiciops gliroides). In evolutionary terms, this gives every indication of being an Australian marsupial, being more closely related to animals like kangaroos than it is to American opossums. Which is a bit odd for an animal that lives in Chile and Argentina. How can this be so? The best guess is that the ancestors of Australian marsupials originated in South America before they crossed over to their new home, and that, for some reason, the monito del monte was the only one to survive in their original homeland. It is, however, also possible that the Australian marsupials really did originate in Australia - or, for that matter, in Antarctica - and that the monito del monte headed back to South America at a later date before the Straits of Magellan opened up.

The Wooing Ways of Ground Squirrels

Male animals will go a long way to ensure that they become the father for a female's young. If the female isn't likely to be monogamous, they may chase off rivals, beat them up, display their masculinity, or just have giant gonads. But male Columbian ground squirrels (Urocitellus columbianus), it seems, like to try a bit of smooching.

Columbian ground squirrels (that's British Columbia, by the way, not Colombia in South America) live in complex, underground burrows. They mate in the early spring, after waking up from hibernation, and the females are sexually fertile for just one day during each year, making competition between males particularly important. Yes, the males do fight one another to establish territories, but, according to a new discovery, that isn't their only trick.

In short, they don't go too far on a first date. They sneak into the female's burrows at night, when she isn't sexually fertile, and spend the night with her, without doing anything. The next morning - and the more experienced males do seem to be pretty good at predicting in advance the one day when this is going to happen - the females wakes up feeling randy... and, well, who's already there?

When Whales Walked the Land

The Eocene, the second epoch of the Age of Mammals, was a time of many strange creatures. The mammals were well established by this point, but few of the modern groups of mammal we are familiar with had yet evolved, and those that had did not necessarily look the same as they do today. Take the whales, for example:

Today, there are two basic types of whale. The odontocetes, or toothed whales, are the largest group, and include the porpoises and dolphins, as well as several larger species, including the mighty sperm whale. The other group are the mysticetes, or baleen whales, which have no teeth, and are instead filter feeders. This latter group includes the right whales and, perhaps most famously, the blue whale, which, so far as we know, is the largest animal ever to have lived.

Both of these groups first appeared at the end of the Eocene, but in those days, they shared the seas with a third, older, type of whale, that would die out during the following, Oligocene, epoch. These were the archaeocetes, and they include the original whales from which all the others later evolved.

Weasels on the Riverbank: Mink

While most are still terrestrial, the long sinuous bodies of weasels are easily adapted to an aquatic lifestyle. Within the lineage that led to the modern weasels and their relatives, semi-aquatic habits have evolved at least three times. The first of those lines led to the otters, but the most recent led instead to the European mink (Mustela lutreola), a much smaller animal that is clearly not an otter, and is, in fact, most closely related to the ferrets and polecats.

The European mink was once found throughout central and eastern Europe, from Germany in the west to European Russia in the east. It is almost as aquatic as an otter, and is never found far from fresh water, preferring dense vegetation along the banks of fast-flowing streams and small rivers. Its feet are partially webbed, and it is a good swimmer in comparison to most other members of its family, although not as skilful as the otters. Mink den in natural hollows, such as those beneath tree roots, and will also take over the burrows of their favourite food, water voles.

Even so, while they are undeniably well adapted to a semi-aquatic lifestyle, they are no match for otters. For example, mink do not see well underwater, and only dive after fish, crayfish, and so on, after they have spotted them from above the surface. Given that otters and mink both inhabit the same parts of Europe, why aren't the latter simply out-competed? It turns out that it's their very lack of adaptation that helps them survive.

One of the significant features in the early evolution of mammals was the development of a different posture from their ancestors. Living reptiles, such as lizards and crocodiles, have a sprawling gait, with the limbs splayed out to the side, but, in almost all mammals, the limbs are held erect, directly underneath the body. This has a number of advantages. For example, the body no longer has to bend from side to side as the legs move, which allows the lungs to operate more efficiently - you aren't constantly having to squeeze one of them at a time as your chest flexes. Having the shoulder blades placed more vertically also allows them to have more of a direct involvement in limb movement, effectively giving an extra segment to the limb.

This feature is not unique to mammals, because it also evolved in dinosaurs, and in some prehistoric crocodiles - which, rather alarmingly, could run rapidly across dry land. Today, of course, it is also found in birds. Nonetheless, it is a key feature of mammals, and the starting point for a whole series of adaptations in mammalian limb structure. From this beginning, mammalian limbs have taken on a wide range of different forms, adapted to all kinds of different lifestyles.

One example would be the development of hooves. The stance of hoofed animals, standing on the very tips of their toes, is thought to give the limb greater flexibility and allow them to run faster. Hooves have therefore evolved in herbivores, to, at least in part, allow them to escape from predators. Given the speed at which, for example, a cheetah moves, hooves clearly aren't essential for rapid running, but they do seem to help, and one might wonder why no living predators - as keen to catch prey as the prey is not to be caught - possess them. The answer, most likely, is that claws are just too useful to carnivores, which use them as weapons to bring down their prey; something that wouldn't work with a hoof.

With the great variation of mammals that exist, its quite obvious that the proportions and shapes of limbs vary considerably between them. Still, there are some limits to this variation if you want to be able to walk or run effectively, and a couple of years ago, Manuela Schmidt and Martin Fischer of Jena University conducted a study comparing the limbs of a wide range of mammalian species to look at those limitations. One of their conclusions was that the hind limbs of mammals vary far less than the fore limbs.