Today, almost all mammals fall into one of two major groups: the placentals and the marsupials. These two groups represent a fundamental split in the lineage of the mammals, a split that occurred long, long before the dinosaurs died out, when mammals were, for the most part, small shrew-like animals living in the shadow of the great reptiles. But how long ago, exactly?

Since 2002, the oldest known fossil of a possibly placental mammal was that of Eomaia. It is remarkably well preserved, even including impressions of the animal's fur, and dates from 125 million years ago. The oldest known marsupial fossil, Sinodelphys, dates from around the same time and place, and there had been reason to suppose that the two lines separated not long before that.

But just how long ago is that? I have recently been using charts to show the age of various fossils within the Age of Mammals. That entire era has lasted (so far) 65 million years, so to get back to Eomaia we need to head back almost as far again as the whole period covered by the chart. It was a time before such famous dinosaurs as Tyrannosaurus and Triceratops had evolved, and the best known animals of the time are perhaps Iguanodon, Kronosaurus, and Deinonychus (on which the 'raptors of the Jurassic Park films seem to have been based, although they decided to use the cooler sounding name of a rather smaller dinosaur instead).

Secrets of the Mound-building Mouse 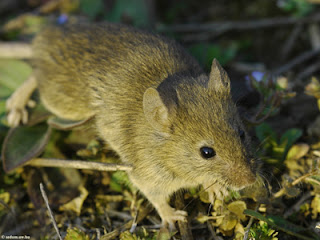 In temperate climates, such as we have in Europe, and in the northern parts of North America, winter can be a difficult time for animals. The weather is cold, there is often snow on the ground, and food is in short supply. Some animals hibernate through the winter, while others struggle on through the harsh weather. Smaller mammals, such as rodents, often store dry food in caches that they can return to when there is nothing fresh available. Squirrels, for example, hide nuts to bide them through hard times. But some rodents go to greater lengths.

Out of the over six hundred members of the mouse family, the steppe mouse (Mus spicilegus) is one of the three closest species to the familiar house mouse (Mus musculus). It is found from the easternmost border of Austria, through Hungary, Romania, and Serbia, and out into the steppe lands of Ukraine and western Russia. They are found primarily in and around agricultural land and orchards, and rather less in the wild grasslands where they presumably originated. Indeed, while the species seems to have diverged from the house mouse around three million years ago, long before modern humans were around, today it seems to rely upon us to create the unnatural habitats in which it thrives best. In this respect, it resembles the house mouse, which only rarely lives outdoors.

Sex Without Pregnancy: how female macaques get what they want

The females of most mammal species have some means of signalling to males that they are sexually fertile, and able to become pregnant. There is often some sort of breeding season, timed so that birth is likely to happen at a point in the year when food is abundant - spring, the rainy season, or whatever. But the cycles of female hormones mean that the female is only actually capable of becoming pregnant for periods of a few days, or even hours, during that season. Essentially, she comes into heat, and the males get excited.

That's the usual pattern. But there are some mammals that don't seem to do this. While they may not bother to mate outside of a mating season, they don't seem to be indicating to males when, within that season, they are likely to become pregnant. But is that really the case?

Why Cows Have Four Stomachs 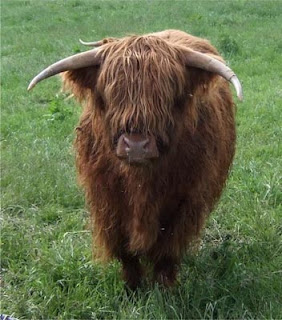 The stomach is an organ found in almost all vertebrates. Although there is considerable variation among the different groups, and there are some fish that don't have one at all, in general it has two functions. Firstly, it helps to store food for later digestion so that you don't constantly have to be eating, and secondly, it begins the digestion of food both by physically grinding it up and by mixing it with acid and digestive enzymes. Sometimes these functions are separated to some extent - for example, birds have a large crop for food storage, and a smaller true stomach below it that digests the food, and includes a muscular, grinding gizzard (a useful thing when you have no teeth). But the most complex stomachs of all are found in mammals.

A cow does, indeed, have four stomachs. Or, at least, it has a stomach divided into four separate chambers, which amounts to the same thing. Nor, of course, are cows alone in this. It's a feature found throughout the cattle family, which is a fairly large group consisting of over a hundred species - most of them antelopes, although it also includes the sheep and goats. The cattle were not the first family to evolve the feature, and we know that because its also found in all their close relatives, including such animals as deer and giraffes. In fact, the only truly cloven-hoofed animals that don't have four stomachs are the pigs and peccaries - which is why they aren't kosher.

In fact, we can group all the mammals that have this four-chambered stomach together. This group are called the "pecorans". Why not just "ruminants"? We'll get onto that later.