Learning To Be a Good Mother (If You're a Squirrel) 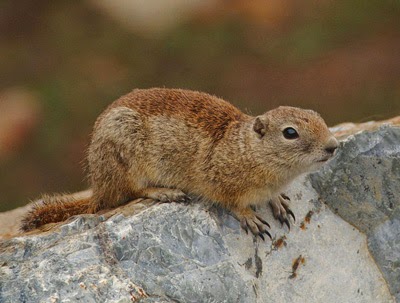 Like birds, but unlike many other kinds of animal, mammals spend a lot of time raising and protecting their young. It's therefore obviously important that mother mammals have some kind of instinctive understanding of what to do to look after their children. And instinct does, indeed, play a big role in maternal care - even among humans, we talk about a mother's "instinctive" desire to protect and nurture her children.

Among humans, though, it isn't all instinct; we have many ways of learning even something as basic as this. But how true is this of other mammals? In fact, there is solid evidence that other animals get better with practice. Instinct may be important, but animals are capable of learning from experience, and a second-time mother generally has a better idea of what she's doing than one who's new to the whole thing. Indeed, not all wild animals are equally good mothers. There is strong evidence, for instance, that animals that suffered the equivalent of child abuse when young grow up to be poor parents themselves.

Monkeys of the marmoset family, which include tamarins, are known, not just for their small size, but also their luxuriant fur, which often forms extravagant tufts on the head. Arguably, none of these tufts are more distinctive than the drooping moustaches of emperor tamarins (Saguinus imperator).

Emperor tamarins live in the lowland jungles just east of the Andes, in the border regions between western Peru, northern Bolivia, and eastern Brazil. Perhaps because of this remote location, they were discovered remarkably late for an animal so distinctive; they were first described by Brazilian zoologist Émil Goeldi in 1907 (and we'll be coming back to him in a later post). On the plus side, this distance from civilisation has kept them relatively secure, with loggers and the like only recently having reached this far into the jungle.

Compared with some other members of their family, they are not especially colourful. Their bodies are grey, reaching near-black on the face and hands, and they have a reddish tail with a grey tip. What makes them so noticeable, of course, are those long, pure white, moustaches, which are present in both sexes.  Indeed, the more widespread of the two subspecies also has a thin and straggly beard hanging from its chin. The moustache apparently reminded Goeldi of Kaiser Wilhelm II, although to be honest, it's hard to see why (one would have thought that some of the Chinese emperors would have made a better fit).

First of the Fossil Dolphins

The dolphin family is the largest family of aquatic mammals, by number of species. As I've mentioned a few times before, exactly how we're supposed to divide it up, and what scientific names we should give its various members is a matter of some debate. Genetic analyses designed to show which species are related to which just show a tangled mess. So, while we do know that the scheme we use at the present is wrong, we don't really know what we should replace it with, and, for the time being, we're stuck with what we've got.

The reason for this is likely a very rapid burst of evolutionary change, with numerous new species arising at more or less the same time. By examining the genetics of different species, and using what we know of mutation rates, we can make a guess as to when this happened. It turns out to be shortly before, or perhaps during the beginning of, the Ice Ages, in the late Pliocene to early Pleistocene. That at least one species seems to have arisen as a hybrid between two of the others - with the arms of the family tree effectively crossing back over again - doesn't really help matters.