While the common house mouse is likely one of the most familiar of all animals living wild in Britain, it is only one of four species of mouse native to the islands. (France and Germany, for comparison, have six each, although they aren't the same six). Of the other three, the closest relatives of the house mouse are the two species of field mouse, which are also found widely on continental Europe.

Field mice have benefited less from the presence of humans than house mice, since they tend to avoid human dwellings, and there are rather a lot of those in Europe. Given their common name, however, one might suppose that they have at least benefited from the spread of agricultural land. This, however, only true of one of the British species. This is the wood mouse (Apodemus sylvaticus), sometimes also known as the "long-tailed field mouse". In Britain, when the term "field mouse" is used without qualification, it typically means this one.

The warming climate of Early Miocene North America was host to a variety of animals, both familiar and unfamiliar. Even in the former category, some of the creatures would have looked a little odd too modern eyes, but we can still say that a three-toed horse is, at least in general terms, still a horse. One group of animals that would be a little harder to place were the oreodonts (or, more technically, "merycoidodontids"), which were already fairly diverse when the Miocene dawned.

These creatures were unique to the continent and were medium-sized herbivores. They would have looked vaguely like pigs, although without the flattened nose-disc of those animals, and with four functional toes on each foot. As far as we can tell from their teeth, they were mostly browsing animals and were spread quite widely across the continent. 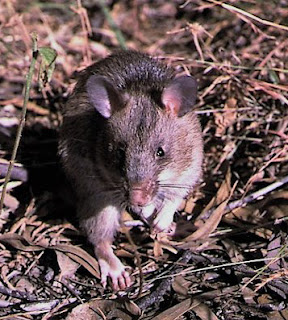 For primates such as humans, vision is our primary sense. For the majority of mammal species, however, the most important sense is probably that of smell. In addition to using this sense to scope out the natural environment around them, many mammals leave scent marks as messages to one another, marking out a territory, advertising their willingness to mate, or whatever else they wish to convey.

Much research on the nature of scent marking focuses on how and where the animal leaves these messages, or how they may differ based on sex, maturity, and so on. This is obviously important if we want to understand why they're doing it, and what it is that they're trying to 'say'. But, naturally, it's also useful to understand how other animals of the same species respond to those marks - there's no point leaving a message if everyone else is just going to ignore it.

The Hybrids are Coming

Conservation - whether it be of mammals or any other kind of animal or plant - tends to focus on the species level. These are the discrete kinds of living creature that can be most easily identified and preserved, ensuring that the mix and variety of the natural world remains as close to its original state as possible. Preservation of subspecies is often a lower priority, which makes sense if you really have to make the choice, but it, too, can be important if we want to preserve such things as genetic variation within a species.

The common understanding of a 'species' is that it consists of a group of animals that cannot interbreed with animals outside that species to create fertile offspring. This, however, is an oversimplification; lines blur, and not always in neat and tidy ways. Scientifically, there are multiple different ways of defining what a 'species' is, but the general idea is that it has to be a group of animals that can be readily identified as different from their relatives. Which tends to mean that, even if they can interbreed with other species, they generally don't, at least in the wild, and maintain a separate gene pool.