The Pig Family: Wild Boar and the Domestication of Pigs

Generally speaking, the wild ancestors of agricultural animals have not fared particularly well. Wild goats are a threatened species, wild horses are an endangered one, camels are doing even worse, and wild cattle have been extinct for centuries. Wild sheep haven't done quite so badly, although they're hardly widespread, but, in general, one of the main problems facing such animals is that the sort of places they like to live are exactly the ones we want to turn into agricultural land to raise their domesticated kin.

Indeed, only two wild ancestors of widely domesticated herbivore are doing well: chickens and pigs. (This may, of course, depend on your definition of "widely"; I'm ignoring, say, rabbits). Indeed, the wild ancestor of the domestic pig is not only reasonably common, it's the single most widespread of any species of wild pig.

Early Whales of the North Pacific 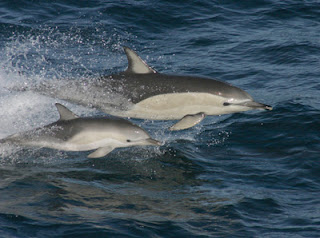 The majority of living cetacean species belong to a group called the odontocetes, or "toothed whales". Most of them aren't really what we think of as "whales" at all, since the group includes all of the dolphins and porpoises. The group does, however, include a number of much larger species - some of them just really big dolphins, such as the killer whales, but others being less closely related, such as sperm whales, beaked whales, and narwhals.

The odontocetes as a whole stretch back far into the fossil record, with the oldest known examples dating back to around the dawn of the Oligocene epoch 34 million years ago. They rapidly spread across the globe, unhindered by the geographical barriers that often affect more land-based mammals. (The continents were all separate at the time, which would have helped, since it was possible to swim right around the globe without leaving the mid-latitudes).

Jackals on the Motorway 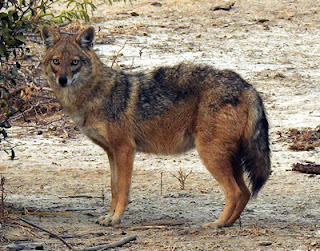 Mammals tend to have a particular area in which they live most of their lives and conduct their various activities. This is known as the animal's "home range", and it's not quite the same thing as a "territory". That's because the latter is an actively defended bit of land, that the animal strives to keep clear of rivals, perhaps marking it with scent as a warning, and using aggression against intruders if they have to. The majority of mammal species don't bother to defend territories, but that doesn't mean that they don't have a home range - after all, they have to live somewhere.

One key difference between a territory and a home range is that the former, by definition, is not shared with any neighbours. Of course, the animal might be social, living in herds, packs or other kinds of band, so that all members of the group share a single territory, but, again, it's not shared with outsiders. A home range, on the other hand, almost always overlaps with at least some others used by members of the same species, especially if they happen to be of the opposite sex. Breeding would be problematic if they didn't.

How Mothers Stop Their Daughters from Sleeping Around

Generally speaking, mammals are equally likely to be born as either males or females. The exact proportion may vary a little, and it doesn't follow that both sexes form 50% of the adult population, because one or the other may be more likely to die young. It's even less the case that all males, or all females, are equally likely to pair up and have offspring of their own.

This disparity is known as reproductive skew, and it varies considerably between species, and sometimes even between populations of the same species. At one extreme, it's essentially zero. This happens if the species is basically monogamous, usually because child rearing is a sufficiently draining exercise that being able to share the duties between two individuals is really helpful. It can also happen for what might be regarded as the exact opposite reason - if the species is highly promiscuous so that the females will mate with absolutely anyone, once again, everyone's chances of reproducing are the same. There's just less of that courtship stuff to worry about, off-set by having a single-parent family once you're done.