Bovines: How Cows Were Domesticated

Cattle (Bos taurus) are among the most familiar of herbivorous domestic animals. According to recent estimates, there are well over a billion of them on the planet today, found almost anywhere that humans practice agriculture. In the west, we are familiar with them as a source of beef or milk, but, in many parts of the world, they are still used primarily as draft animals ("oxen"). Indeed, they are important enough that Christopher Columbus first brought them to America in 1493, on only his second voyage to the New World.

But one unusual thing about cattle is that there is no living wild form of the animal. There are still wolves and wildcats, wild goats, wild sheep, and wild boars... but there are no wild cattle. They're not unique in this respect, to be sure, and there are a few populations of feral cattle around the world (that is animals living in the wild whose ancestors were domesticated), but it's a fairly exclusive club nonetheless. And, obviously, it wasn't always the case.

When it comes to the extinct mammalian predators of North America, few are more famous than the sabretooth cat Smilodon, with the dire wolf likely coming a close second. But both of these animals lived during the Ice Ages, and, of course, with all those tasty horses, deer, and so forth wandering the steppe-lands of Pliocene North America, there were plenty of carnivores there before the Ice Ages began. Indeed, scary though Smilodon undoubtedly was, unless you're the kind of person that enjoys wrestling hungry tigers in the modern world, many of these others were probably quite dangerous enough.

But not, it has to be said, all of them - at least, from a human perspective. There were, as you might expect, many small carnivores in North America at the time, including badgers, weasels, skunks, raccoons and early wolverines and otters. While we can't know the details of their coat colours, it's quite likely that many of these creatures would have looked not too different from their modern relatives and possibly would have been hard to tell apart from them on casual inspection.

March of the Beavers 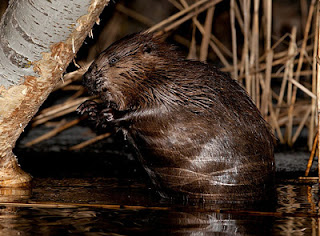 When most people think of "rodents", they most likely think of rats or mice. This is fair enough, as the great majority of rodent species pretty much fit that description. But there are, of course, many others. Voles, hamsters, gerbils, and so on are probably fairly obvious, and somebody once asked me if squirrels were "members of the vermin family", by which I assume they meant "rodents" - which they certainly are. One suspects, however, that beavers might come fairly low on most people's list.

Having said which, it's probably not so surprising when you think about it. They do, after all, have huge gnawing teeth that look like those of rats (and which, indeed, help define the rodents as a group). Granted, they are pretty enormous as rodents go, and bulky with flat, paddle-shaped tails, but rodents they are, with animals like gophers and kangaroo rats among their closest relatives.

The beaver family, ignoring the extinct forms, contains a grand total of two species, both of which are found in Europe. One of them is the animal familiar to Americans (Castor canadensis). Descended from a population that originally lived in Wyoming and Canada, these were shipped across to Finland in 1937, and subsequently spread across the country, crossing the eastern border into Russia in 1952. A year later, some of them were moved again, this time to Austria, and in the 1970s, some were shipped all the way to eastern Siberia. All of these populations survive, although attempts to introduce the animals to France, Ukraine, and Belarus all ultimately failed.

As I mentioned just a few weeks ago, male mammals are generally larger than female ones, although there are some notable exceptions. This is particularly the case where males have to compete for access to females, and there are few cases where this is more obvious than among seals and sea lions.

Sea lions and "true" (or "earless") seals belong to different, if closely related, families, but their reproductive strategy is much the same. In both cases, they spend most of their lives at seal, but they can't give birth there without their pups drowning. The majority of species breed once every year, with the females coming ashore, first to give birth, and then, almost immediately after, to get pregnant again before returning to the sea.

The precise details vary from species to species, but the South American sea lion (Otaria flavescens *) is a typical example. In December each year (that is to say, in early summer, this being the Southern Hemisphere), males haul themselves out onto beaches and fight one another for the best spots. Naturally, the largest and most aggressive males win, with the smaller and younger individuals forced out, to either wait another year, or to make daring raids when the larger ones aren't looking.