On the Origin of Ducks

This is the post that will be current as of 1st April, when Synapsida traditionally hands over to the Lords of Misrule. Or, failing that, birds.

The fossil history of birds is less well-studied than that of mammals. This is hardly to say that it has been ignored, and we do know a reasonable amount about it. But a key problem with bird fossils is that, in order to fly, birds have light and fragile bones. These don't tend to survive the fossilisation process intact (bats don't do much better) and birds also lack the great standby of palaeontologists specialising in mammals - teeth.

Of course, a notable exception to this are the flightless birds, which can be enormous, and tend to have reasonably solid bones even when they aren't. It's a lot easier to find a reasonably intact skeleton of a terror bird, or even a penguin or fossil ostrich, than it is of something that flies. There's a reason that the previous posts in this April series have all focussed on the flightless sort.

But most birds do fly and are, let's be honest, well known for it. And, despite the difficulties, we do have a number of fossils of flying birds of various kinds - all the way back to Archaeopteryx - so that their evolutionary history is very far from being a blank book.

Despite birds having almost twice as many recognised species as mammals, living species generally have more in common than do, say, a hedgehog, a monkey, and a dolphin. But even so, it's pretty easy to distinguish general types of bird. One of the many obvious categories, for instance, are the waterfowl.

Molecular studies have confirmed what we'd expect based on physical appearance: the waterfowl are a genuine evolutionary group of related animals. That is to say, they are descended from a single common ancestor that they do not share with any other group. But how far back did that ancestor live, and what do we know of its earliest descendants?

The Howard & Moore Complete Checklist of the Birds of the World (which ought to know) currently lists 159 living species of waterfowl, all but four of which belong to the duck family. The oldest fossils that indisputably belong to the duck family date to at least 25 million years ago, at the end of the Oligocene, but genetic evidence shows that the group as a whole may be around 10 million years older than this. We do in fact, have fossils that are very nearly that old, although there is some dispute as to whether they are sufficiently duck-like to be classified as belonging to the existing family - if not, they are still very close relatives, and certainly count as 'waterfowl' in the broader sense.

However, the existence of those other four species of living waterfowl indicates that there must be more to the story than this. While most geese, and all swans, are basically just really big members of the duck family, the magpie goose isn't, and there are also the three species of South American screamer, which look vaguely like semi-aquatic pheasants. The fossil record of these two groups is much poorer than that of the duck family, but both the oldest known fossil screamer and the oldest undisputed magpie goose are also around 25 million years old. What's more significant though, is that genetic and molecular evidence suggests an even older history, since they apparently diverged from the duck family a very long time ago indeed, quite possibly before the extinction of the non-avian dinosaurs. 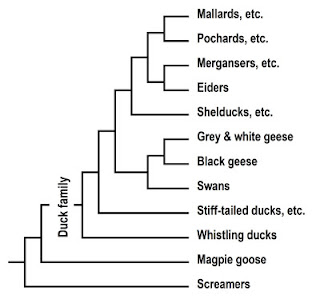 This implies the existence of a number of extinct kinds of waterfowl that existed before the modern families came into being. But when we look for fossils of the relevant age, we don't find very many. The most common such fossils belong to Presbyornis and its kin. When they were initially discovered, they were thought to be flamingos, on account of their long legs and necks, but since the 1990s, they have been consistently regarded as early waterfowl. With flamingo-like legs and duck-like bills, their lifestyle was likely intermediate between those two modern kinds of bird... which suggests that they were fairly unusual even by the standards of early waterfowl.

Beyond that, though, we have relatively little. Anatalavis, dating back over 55 million years, was a goose-sized bird with a wide bill, and has typically been thought to be closer to the modern magpie goose than to other waterfowl.

Vegavis, first described in 2005, is even older, dating back 67 million years, so that it would have lived alongside the likes of Tyrannosaurus rex. Remarkably for something so old, one of the fossils of this bird was so well-preserved that we can determine that it was probably able to 'honk'. On the other hand, while it seems to have been more closely related to waterfowl than anything else alive today, it represents such an early branch that it is more commonly placed in its own group, closer to the extinct demon ducks than to the regular sort.

So, if we exclude Vegavis (and the demon ducks), we're left only with Anatalavis and a few fragmentary bits of bone that it's hard to be sure belonged to waterfowl at all. Or so things stood until this year, because literally in the last three months there have been two new waterfowl described from this early time, filling in a little more information about the very early history of the group.

Naranbulagornis lived in Mongolia around 56 million years ago, at the end of the earliest epoch of the Age of Mammals, the Paleocene. It is known only from a few leg bones, unearthed at the site of Naran-Bulag, but they are just enough to indicate that it most likely was a waterfowl of some kind. Assuming that the legs were in proportion to the rest of it, it was probably around the size of a swan, making it significantly larger than Anatalavis, which lived at around the same time, but much further west, in England.

The shape of the bones is closest to that of living geese and swans, but also has at least some features similar to those seen in screamers and magpie geese. Since it's possible that those are simply 'primitive' features that hadn't yet disappeared this doesn't prove that Naranbulagornis was closer to screamers than to ducks... but it doesn't disprove that possibility, either. That it was somewhere around the base of the waterfowl family tree is all that we can really say.

The bones do, however, show the distinctive groove where the leg muscles most involved with swimming would have been attached, showing that, even at this early stage, this was a waterbird, swimming like a goose, rather than wading like a shorebird - although it probably couldn't dive like many modern ducks, either.

The second newly described fossil, Conflicto, is rather more complete, showing a flying bird with long legs and a narrow, but otherwise duck-like, bill. It was around the size of a small goose, and lived over 61 million years ago all the way down in Antarctica (which was warmer then than it is now). In many ways, it is quite distinctive, and would have looked rather different to living waterfowl, although the shape of the beak may suggest a similar feeding style.

It has been suggested that it may be related to Anatalavis but, if so, the latter is probably not a magpie goose as previously thought. That's because the more complete remains of Conflicto show a number of features in common, not with waterfowl, but with landfowl. These are almost certainly 'primitive' features, found in the common ancestor of both kinds of fowl, but subsequently lost in most of those that adapted more to the water. The fact that they are still present in Conflicto may show that it is part of a very early branch in waterfowl evolution, perhaps having more in common with the ancestral forms from which everything else evolved.

One thing that's notable about both of these fossils - and Anatalavis - is that they are goose or swan-sized. It's possible that this is an artefact of fossil preservation, with smaller remains not having survived in a sufficiently intact state to identify them. But it's perhaps more likely that all early waterfowl were large, and it's the modern ducks that are strange. One theory is that ducks evolved their smaller size to better enable them to feed off fine particles in the water, something that their wider bill also helps with.

Whatever the reason, it must have worked; there are far more species of duck today than there are of geese or swans.