Although the actual number may be higher, depending on the status of certain subspecies, there are 38 widely recognised species of wild cat. Of these, five are formally considered to be "endangered species", and a further thirteen are "threatened", but not sufficiently so to fall into the riskier bracket. Taken together, that's almost half of the total species, and it ignores the significant number of species that are threatened in parts of their natural range, but survive well enough somewhere else.

The primary reasons for this are habitat loss and poaching, and virtually every species of cat - even those, such as the puma/cougar/mountain lion, that aren't threatened overall - has a declining population. Fortunately, the same thing that makes wild cats attractive to poachers - their undeniable charisma and beauty - also inspires conservation efforts of the sort that, say, the Ethiopian amphibious rat (Nilopegamys plumbeus) could only dream of.


Conservation efforts can take many forms, and the most effective are generally those that preserve the animal's native habitat and/or discourage those poachers. But, if all that fails, there's at least the possibility of captive breeding programs. These are not ideal, of course, but some such programs have led to successful reintroductions to the wild, and they're a reasonable last resort that we can fall back on if we absolutely have to.

And, if there are captive breeding programs for critically endangered Polynesian tree snails (and there are) then you'd think that ones for cats would be a doddle. And, in terms of getting support, they are (relatively speaking), with lions and tigers, in particular, being popular zoo exhibits. But, while they aren't quite in the same league as giant pandas, it is difficult to get cats to breed in captivity, as the recent tragedy at London Zoo makes apparent.

While it's probably not relevant to that specific incident, a general understanding of cats' reproductive biology would help such programs, and possibly also be of use to conservation efforts active in the wild. But, with 38 different species to cover, that's quite a broad topic, so can we try to pull it all together?

The structure of the cat family tree is now quite solidly established; genetic studies on cats are common for much the same reason that conservation studies are. The oldest branch contains the big cats, including lions, tigers, leopards, and jaguars, which are found almost worldwide. The small cats first appeared somewhere in southern Asia and, early on, split into three groups. One headed to Africa, where it gave rise to the servals and caracals, one headed to North America, and the other broadly stayed where it was. One branch of the North American group then quickly headed into South America, where they gave rise to the ocelot and its kin, while the remainder, over the course of a million years or so, branched into four different groups, most of which headed back into the Old World again.

This gives us, even before we look at individual species, eight different lineages of the cat family to look at. Unsurprisingly, the studies conducted on feline reproductive biology have focussed more on some branches than others. Ignoring the domestic cat, which obviously has the greatest number of relevant studies, the main focus has been on the big cats, especially the endangered tigers, and on the cheetah. (Which, as the family tree makes clear, isn't technically a "big cat" in this sense, just, um... a really big small cat). Puma/cougar/mountain lions and ocelots haven't done too badly, either.

For the remaining species, there is relatively little, and much of what does exist consists of small scale preliminary studies that give us only a broad outline. The least examined is the admittedly obscure bay cat lineage, with only three studies, all of which were conducted on the same species. 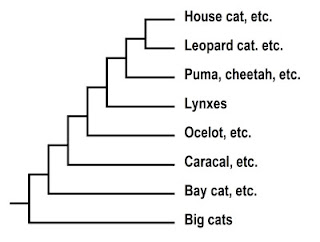 Looking first at reproduction from the females' point of view, cats, unlike humans, have a clear oestrus cycle. Outside of the breeding season, or while mothers are suckling their young, the oestrus cycle is suspended, but otherwise, cats enter oestrus (or "heat") at regular intervals. This is triggered by a rise in the hormone oestradiol, as can be demonstrated by injecting spayed cats with the hormone.

In humans, oestradiol - the main form of oestrogen, although there are others - helps to prepare the lining of the uterus for a possible pregnancy, and is one of the hormones responsible for triggering ovulation. In cats, a rise in levels of the hormone also results in the various behavioural changes associated with being "in heat", such as calling, rubbing objects, and adopting the classical bent-back mating posture technically known as lordosis. How obvious this is varies from species to species, but the general principles do seem to hold for all of them.

Another key difference between cats and humans is that the former typically only ovulate while they are mating, with the physical sensation of penetration activating a neural pathway that leads to a hormonal surge triggering actual ovulation. This doesn't happen every time that they mate, and, indeed, it may take a male several attempts before he successfully induces ovulation in a partner. After ovulation, the female's hormone levels change to those suitable for maintaining pregnancy, although they quickly return to normal in the event that conception does not occur for some reason.

How long oestrus lasts varies quite a bit between individuals, but is reasonably consistent between cat species, with three to six days being somewhere around the average. What varies rather more significantly is how frequent oestrus is, with some species showing just a gap of a day or two between cycles, and others several months. There isn't, unfortunately, much of a pattern here, so that it's hard to predict what one species will do by studying even its closest relatives. The only exception are the lynxes, which come into heat only once per year, for anything up to ten days at a time.

Apart from the lynxes, the only wild cats known to have a distinct breeding season are the European wild cat, the big cats, and Pallas' cat (Otocolobus manul), although some do at least seem to prefer some times of the year over others. However, given that these studies typically take place in zoos, it's entirely possible that this is an effect of being in captivity, with cats given a regular year-round food supply able to abandon a more tightly controlled breeding season.

The reproductive biology of males is, in some respects, rather simpler; they respond to oestrus in females by trying to mate with them. What we can evaluate here, however, is the quality of their sperm. Here the evidence is somewhat worrying: on average, about 60% of sperm cells produced by male cats in captivity are abnormal, significantly reducing their chances of getting a female pregnant.

There is some variation between species here, with lynxes, puma/cougar/mountain lions, and cheetahs faring worst, while caracals and servals fare best (from a very small number of studies in their case, so that may not mean much). Even so, such a highly wasteful production of non-functional sperm seems unlikely to be a part of their normal biology.

There are at least two possible explanations for this. One is that captivity itself is causing the problem, perhaps by stressing the animal. We do know that many captive cats do have higher levels of stress hormones than those living in the wild, and that this can affect sperm production, so it's not implausible. If so, it's possible that simply giving the animals better enclosures, or less exposure to zoo visitors, may help since these can reduce stress levels and increase amorous behaviour.

The other possibility is potentially harder to deal with. We know from studies on lions that more inbred populations of cats tend to have more abnormal sperm, and this may well be true of other species, too. Because of their declining population and the loss of connections between the refuges that remain, inbreeding is a significant problem for many cat species. Even the domestic sort is affected, with some pedigree animals notably inbred. In wild animals, the most extreme example is probably the cheetah, with the population having gone almost extinct around 10,000 years ago, leaving almost no genetic diversity amongst their descendants.

This, needless to say, is a harder problem to fix. The use of artificial insemination might work, enabling us to winnow out the ineffective sperm before using it. Unfortunately, this rarely works in cats, so we either need to find a better way of doing it or rely on other measures to try and maintain or enhance whatever genetic diversity we currently have.

On the plus side, since these are cats we are talking about, there's a good chance that such efforts will continue, at least for the larger, better known, species. But it may already be too late for the Ethiopian amphibious rat.